‘I want the kids to be OK’, says expert who found 1970s end-of-world prediction is on schedule 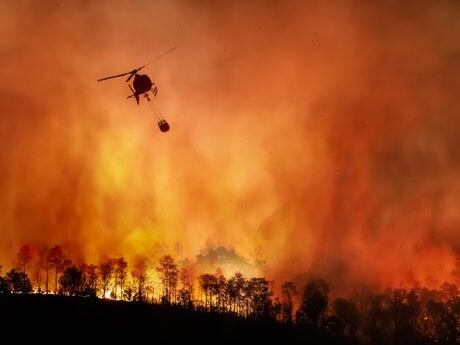 An expert who found a 1970s forecast on the collapse of society was on schedule has said she would just like “the kids to be OK”.

Gaia Herrington – who has produced an update to the decades-old Massachusetts Institute of Technology (MIT) prediction – said her drive is preserving quality of life for younger generations.

She had found a 1972 MIT scientific paper’s estimate society would collapse by 2050 appears to be on course , following analysis of the forecast.

But Ms Herrington, who works for KPMG, told The Guardian the key findings from her independent research was that “we still have a choice to align with a scenario that does not end in collapse”.

In an interview with the newspaper, the researcher said she is motivated by the wellbeing of future generations, saying: “I would like ‘the kids to be OK’, even if none of them were mine.”

She added: “I am driven by a passion for sustainability . Always have been.”

Her Harvard thesis found that a “decline” in standards of living could begin by as early as 2040 and fall to a historic low by 2050.

Writing about the collapse of society, she said it “does not mean that humanity will cease to exist” but instead that “economic and industrial growth will stop, and then decline, which will hurt food production and standards of living”.

Her paper said “continuing business as usual, that is, pursuing continuous growth” would lead to a decline in standards of living across the West.

This would be the case even with technological adaptations, she argued.

Ms Herrington told The Guardian that even if mankind escapes the issue of “resource scarcity” through innovations, this would “probably see an increase in population” unless the “continued search for growth” is limited.

The 1972 paper by MIT researchers, which Ms Herrington studied, warned civilisation would collapse within the next century if upward population and economic growth continued.

Wow. Like we can’t see this. We gave away our jobs to other countries. We allowed our country to be brought down. We keep allowing for our people to be lazier and lazier. We don’t push anymore. We don’t strive anymore. We have to start being American again.

if you want future generations to have fresh air and a good environment we need to get all of these old politicians with their outdated beliefs out of office and let younger people run things since they will be around to feel the effects not these dinosaurs that have been running things for decades making things worse.

You can’t have “End of the world,” and “Kids be okay,” in the same sentence. Or same paragraph for that matter. Oxymoron comes to mind.

What Experts Say about Anxiety & Kids

Every child worries. And whether it be about their first day of school or trying out a new sport, every worry matters. It’s important that you, as a parent, let them know that you’re listening, let them know you understand, and help them understand as well. Keep in mind that kids learn how to recognize and express their worry by observing and mimicking others’ behavior or relying on you to teach them! Here’s some tips on explaining worry and anxiety to your little one.
KIDS・14 DAYS AGO
ScienceAlert

Parental Burnout in The US Is Among The Highest in The World, And We May Know Why

Nobody ever said parenting was easy, but depending on circumstances, some people can find it much harder than others. In recent years researchers have begun to recognize 'parental burnout' – a condition in which exhausted parents become overwhelmed by their role as primary carers, potentially leading to emotional distance from their children, parental ineffectiveness, neglect, and worse in some cases. But where does this phenomenon come from? To examine whether cultural factors might contribute to parental burnout, a team led by researchers from UCLouvain in Belgium surveyed over 17,000 parents living in 42 countries (with the data being collected between 2018 and...
FAMILY RELATIONSHIPS・1 DAY AGO
deseret.com

Scientists have suggested there are multiple mysterious structures hidden beneath the Greenland ice sheet. Per Space.com, radar and other technologies have helped scientists discover what’s sitting below Greenland’s ice sheet, which is about 9,800 feet thick. “These new tools reveal a complex, invisible landscape that holds clues to the past...
SCIENCE・24 DAYS AGO
Interesting Engineering

Physicists Say That a Fifth Dimension Could Be on the Horizon

Scientists often get asked if they do new experiments in the lab or keep repeating older ones that they know the results for sure. While most scientists do the former, the progress of science also depends on doing the latter and confirming if what we believe we know holds true in light of the new information as well.
SCIENCE・15 DAYS AGO

Scientists have uncovered a fascinating new insight into what caused one of the most rapid and dramatic instances of climate change in the history of the Earth. A team of researchers, led by Dr Sev Kender from the University of Exeter, have made a pivotal breakthrough in the cause behind the Paleocene-Eocene Thermal Maximum (PETM) – an extreme global warming event that lasted for around 150 thousand years which saw significant temperature rises.
SCIENCE・24 DAYS AGO
Reuters

AMSTERDAM (Reuters) - A Dutch scientist has uncovered old recordings of a musk duck mimicking the phrase, “You bloody fool!” - learnt when it was raised by humans in an Australian bird park. Leiden University scientist Carel Ten Cate said that what was interesting about the vocal expression of the...
WILDLIFE・15 DAYS AGO
natureworldnews.com

In the Indonesian island of Sulawesi, a group called the Toaleans has identified a 'new type of ancient human' in the form of a 7,200-year-old female skeleton 'Bessé', buried in a foetal position, partially obscured by rocks. Christened Bessé, who only died out 1,500 years ago and most likely 17...
SCIENCE・27 DAYS AGO
LiveScience

China's Shenzhou 12 astronauts have sent back stunning images taken out of small windows of the Tianhe space station module in low-Earth orbit. The three astronauts, the first crewmembers to visit Tianhe, have been aboard the module since June 17. The crew have completed two extravehicular activities (EVAs), or spacewalks, and carried out a range of experiments, but China's human spaceflight agency has only recently released images taken by the astronauts.
AEROSPACE & DEFENSE・10 DAYS AGO

Scientists Just Accidentally Discovered the Most Northern Island in the World

A new Island just popped up off the Northern coast of Greenland. Scientists from Denmark and Switzerland who landed by helicopter on it in July originally believed it was Oodaaq Island. Months later, journalist Martin Breum, who had accompanied them on the exhibition, went back through his notes and realized the team had been about 80 miles North of Oodaaq.
SCIENCE・16 DAYS AGO
healththoroughfare.com

Dark Energy has been puzzling astrophysicists for a long time. They found out that the mysterious form of energy exists without knowing what exactly is it and what characteristics does it have. Dark energy is known as the driving force behind the accelerated expansion of the Universe. Thanks to a...
ASTRONOMY・9 DAYS AGO
Interesting Engineering

New Magnet Is Powerful Enough to Lift an Aircraft Carrier

Less than a week after a Bill Gates-backed MIT startup announced it had successfully tested a massive magnet that could allow them to achieve "net energy" with their nuclear fusion reactor, scientists at France's International Thermonuclear Experimental Reactor (ITER) received the first part of another huge magnet, an AP report explains.
AEROSPACE & DEFENSE・10 DAYS AGO
Newsweek

Scientists have recreated the faces of three ancient Egyptian men using DNA which is around 2,500 years old.
SCIENCE・9 DAYS AGO

In astrology, the moon is connected to ancient wisdom, divination, and feminine power. For that reason, your strongest psychic ability can be linked to the zodiac sign energy of your moon sign. When considering the natural relationship between the sun and moon, we all know that the sun bestows light,...
ASTRONOMY・28 DAYS AGO
dailygalaxy.com

Perhaps someday in the near future the first signal from an alien intelligence will be detected by artificial intelligence. The future of artificial intelligence (AI) algorithms for finding exoplanets hidden in datasets was paved by one such algorithm developed by the University of Texas at Austin in partnership with Google in 2019 to probe the entire Kepler 2 data set of approximately 300,000 stars. The method is equally applicable to Kepler’s successor planet-hunting mission, TESS, which launched in April 2018.
TECHNOLOGY・29 DAYS AGO
EatThis

Youth may be wasted on the young, but it's no longer their exclusive property. In recent years, scientists have found that it's possible to keep yourself younger than your chronological age might suggest, just by adopting some easy lifestyle changes and avoiding some common habits that are prematurely aging. Read on to find out more—and to ensure your health and the health of others, don't miss these Sure Signs You May Have Already Had COVID.
SCIENCE・9 DAYS AGO
natureworldnews.com

Nuclear war would lead to a lot of immediate deaths, but smoke from the ensuing fires would also prompt climate change that could persist for up to 15 years. Eventually, this may threaten the production of food and human health all over the world, as per a study conducted by researchers at the National Center for Atmospheric Research, Rutgers University, and other institutions.
SCIENCE・8 DAYS AGO
Knowridge Science Report

In a new study from King’s College London and elsewhere, researchers found that low levels of electrical current can be used to inhibit pain signals in nerves from ever reaching the brain. This results in a strong decrease in the levels of pain experienced by people. Previous studies have shown...
HEALTH・29 DAYS AGO
Birmingham Star

Comparing brains to computers is a long and dearly held analogy in both neuroscience and computer science. It’s not hard to see why. Our brains can perform many of the tasks we want computers to handle with an easy, mysterious grace. So, it goes, understanding the inner workings of our minds can help us build better computers; and those computers can help us better understand our own minds. Also, if brains are like computers, knowing how much computation it takes them to do what they do can help us predict when machines will match minds.
COMPUTERS・13 DAYS AGO
The Independent

Disregarding their unappealing habit of sucking blood from live victims, vampire bats increasingly appear to be emerging as a challenger to humans in their efforts at operating a civil society, with recent research revealing an extraordinary level of cooperation and resourcefulness among colonies. These include: members of the species self-isolating...
WILDLIFE・1 DAY AGO