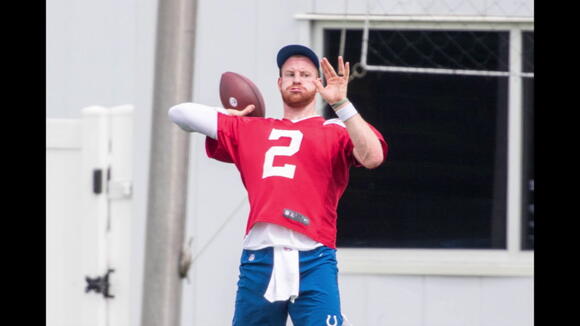 Sports Illustrated's Raider Maven goes behind enemy lines to get the latest information on the Raiders' upcoming AFC opponents for the 2021 NFL season straight from the source covering them.

This game may have finished the season, but with another week added to the schedule, the Raiders are heading to Indianapolis on Week 17.

Jake Arthur has covered the Indianapolis Colts for nearly a decade, and he is now the Senior Analyst for Sports Illustrated Horseshoe Huddle. He recently joined Raider Maven's Editor and Publisher Hondo Carpenter on the radio to inform Raider nation what the Colts are up to before training camp. Carpenter was co-hosting with Clay Baker on the "Pritch & Clay" morning show on Raider Nation Radio (LINK TO LISTEN LIVE).

"This is just the perfect place for it. It's really revealed how close Frank Reich and Carson Wentz were in their days in Philly, and just how they feel about each other and how well they work together. It just seems like this is really gonna work out," Arthur said.

Carson Wentz was traded this offseason from Philadelphia, reuniting with his old offensive coordinator Frank Reich. Everyone in the organization expects Wentz to return to his old form when he led the Eagles to the Super Bowl.

Wentz will be the Colts' biggest X-factor this season. He comes into a team that is well built and has no significant concerns offensively.

"The Colts don't have a bunch of high superstar names on the offense but they've kind of got a deep, deep group of guys who are dependable," Arthur added. "They've got two or three quality tight ends, their running game was really good. Pretty much everyone in the receiver corps is capable of at least moving the chains."

Last year's match-up against the Colts exposed the Raiders' rushing defense, as Jonathan Taylor ran for 150 yards and two touchdowns.

The Colts' defense does not see any significant changes. This young, athletic group is led by linebacker Darius Leonard, who has arguably become one of the best linebackers in the league. He finished last year's match-up with 11 tackles.

DeForest Buckner was a steal and is expected to return to his Pro Bowl form and help this team push for a deep playoff run.

According to Arthur, the floor for these Colts are 11 wins while the ceiling is 12. The Colts will be in contention to make the playoffs. The AFC South is up for grabs between Colts and the Tennessee Titans. The Jacksonville Jaguars and the Houston Texans find themselves at the bottom of the division and the league.

Being so late into the season, this game will have many implications for both teams as they'll try to push their way into the playoffs.

Wentz should build confidence moving forward, but the Colts' rushing attack will need to be stopped if the Raiders plan to leave Indy with a win and a spot into the playoffs.

Want the latest breaking Las Vegas Raiders news delivered straight to your email for FREE? Sign up for the DAILY Raiders Nation newsletter when you CLICK THE FOLLOW button on the main page. Don't miss any of the latest up to the second updates for your Las Vegas Raiders when you follow on Twitter @HondoCarpenter

We’re just days away from the start of the 2021 NFL season but teams are still tweaking their rosters a but. For the Las Vegas Raiders, those tweaks have led to a surprise cut on Monday. According to NFL insider Tom Pelissero, the Raiders waiving second-year linebacker Tanner Muse. And...
NFL・16 DAYS AGO
fastphillysports.com

Colts QB Carson Wentz is on the COVID list, and we all assume that he has not been vaccinated against the virus, unlike the vast majority of NFL players, who want to avoid a forfeit. Indy Star columnist Gregg Doyel has seen enough of Wentz, whom he bashed in his...
NFL・21 DAYS AGO
Fox Sports Radio

Ben Maller: “People were still retroactively condemning the Indianapolis fans who were at that exhibition game for their ‘harsh’ treatment. ‘iT’s nOt fAiR!’, ‘iT’s nOt rIgHt!’ Now that time has passed, did Andrew Luck deserve getting booed from the Colts fans? I’m nodding my head ‘YES’ on this one. He absolutely deserved what he got and it was a completely warranted response by the Indianapolis fans. Andrew Luck BOTCHED that entire episode. He deserved to take a shower in boos and he got it. Timing is everything, and this was the ‘fumblerooski’ the way this was handled. This was not the time nor the place. If Luck was truly defeated at the game of football and he wanted to quit, you do that at the END of a season. You don’t do that a couple weeks before the start of the regular season. Not after you’ve done the offseason program and gone through 85% of training camp, and the season is on the horizon. You talk about leaving the Colts holding the bag. Andrew Luck was ahead of his time, he got flack, but it is now socially acceptable to be a quitter. You’re a hero if you’re a quitter and you become a powerful figure in the sporting world. If Luck had to do it over again, what he should have done was use the get out of criticism card, and said ‘I can’t play anymore, I’ve got mental illness.’ If only he had done that everyone would have shut up! The same usual cockroaches will come out and rush to your defense. If you say anything bad about Simone Biles or Naomi Osaka you’re a ‘HEATHEN’ or you’re an ‘OGRE.'" (Full Video Above)
NFL・27 DAYS AGO
Sports Illustrated

INDIANAPOLIS – Carson Wentz has played through a lot in his football career, but he knew this was an injury that was going to knock him out of Sunday’s game. It took the 11th hit against Wentz on Sunday—marking an astonishing 21 for the season—that finally sent him to the sideline for good.
NFL・3 DAYS AGO
The Big Lead

Carson Wentz went down with another nasty-looking injury in yesterday's loss to the Los Angeles Rams and it throws the Indianapolis Colts' year into even bleaker territory. A three-game road trip to Tennessee, Miami and Baltimore could mean playoff hopes are fully extinguished before pumpkin spice latte season hits mid-stride. It's a disappointing turn of events but not a surprising one as the one thing everyone knows about Wentz is that, whether it's terrible luck or structural weakness, he tends to be unavailable when teams need him.
NFL・2 DAYS AGO
USA TODAY

Peyton and Eli Manning had some quips about the Patriots and welcomed Rob Gronkowski and Pat McAfee on their second Monday Night Football broadcast.
NFL・2 DAYS AGO
Asbury Park Press

The Seattle Seahawks and Indianapolis Colts meet Sunday at Lucas Oil Stadium in Indianapolis. Kickoff is scheduled for 1 p.m. ET and the game is televised on FOX. Below, we look at the Seahawks vs. Colts odds and lines, and make our best NFL picks, predictions and bets. The Seahawks...
NFL・12 DAYS AGO

NFL plans ‘Hard Knocks’ announcement during TNF originally appeared on NBC Sports Washington. The series "Hard Knocks" soon will make its regular season debut. It was announced during halftime of Thursday Night Football that the NFL Films and HBO series, which for the last 20 years has offered a behind-the-scenes look at a team during preseason, will have an in-season edition covering the Indianapolis Colts beginning on Nov. 17.
NFL・6 DAYS AGO
USA TODAY Sports Media Group

Behind Enemy Lines: 5 questions with Raiders Wire ahead of Week 1

The Baltimore Ravens are set to take on the Las Vegas Raiders in their opening game of the 2021 season. They’ll be under the bright lights of Monday Night Football, which will be big test early on in the year. Baltimore has dealt with a lot over the last few...
NFL・11 DAYS AGO
houstonmirror.com

COMING IN NOVEMBER - Hard Knocks In Season: The Indianapolis Colts

NEW YORK, NY - For the first time in the history of sports television's most acclaimed sports reality franchise, HARD KNOCKS will present a multi-episode in-season edition when HBO Sports and NFL FILMS team up for HARD KNOCKS IN SEASON: THE INDIANAPOLIS COLTS this fall for an all-new primetime docuseries on the AFC South team.
NFL・5 DAYS AGO

What the 44-year-old Tom Brady is doing for the Buccaneers is one of the most remarkable accomplishments in modern sports.
NFL・2 DAYS AGO
USA TODAY

While Derek Carr has the Raiders off to a 2-0 start, Lamar Jackson finally got the best of Patrick Mahomes and the Chiefs.
NFL・2 DAYS AGO
USA TODAY

Indianapolis Colts quarterback Carson Wentz said he's "doing everything he can" to be able to play Sunday against the Tennessee Titans.
NFL・12 HOURS AGO
USA TODAY

The Colts will map out a treatment plan for injured quarterback Carson Wentz this week. Jacob Eason will start if Wentz can't play.
NFL・2 DAYS AGO
Sportsnaut

The NFL injury report is always filled with some of the game’s best stars, leaving fans and fantasy football managers
NFL・1 DAY AGO
Sportsnaut