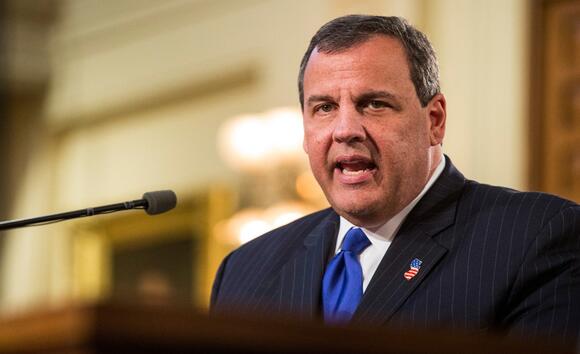 Former New Jersey Gov. Chris Christie (R) advised officials working to convince unvaccinated Americans to receive a coronavirus inoculation to focus on explaining the facts about vaccines rather than mandates.

"The vaccines do work," Christie said Sunday on ABC's "This Week." "Every focus group I've been in, Republicans who are not vaccinated, you have to walk them through the logic of this."

Christie added that vaccine-hesitant Americans "don't want to be indoctrinated."

"They're willing to be vaccinated," he added.

The former governor of New Jersey said leaders in the U.S. have "fallen down" in their messaging campaign on vaccinations.

"They're just saying, 'Get vaccinated,' " he said.

The Republican said he recently spent time with a conservative friend who he said told him that he doesn't "want the government telling me what I have to do."

"These folks do not respond to be ordered to do those things. It's a sort of libertarian response to this," Christie said. "I walked him through the facts of this and he said, 'OK, I'm going to go get vaccinated.' That's what we need to do."

With the highly contagious delta variant now spreading through the United States and daily coronavirus cases across the country rising, public health officials say a lack of vaccinations among hesitant or unwilling Americans is driving the surge.

Recent polling finds nearly 30 percent of Republicans say they won't get vaccinated, sparking several prominent conservative politicians and media figures to publicly announce they have received a shot and urging others to do so.

The White House is facing new pressure to mandate people who work in public schools or universities to get a vaccine as students prepare to return in the fall.

Christie contracted the coronavirus and was hospitalized late last year, and he later said he was wrong for not wearing a mask in public before being vaccinated.

how many thousands illegal are being displaced all thru the united states with out being tested and just dropped off here their and every where? by the thousands on a daily basic.. and it's completely uncontrolled. Constance crossing and camping no testing ..GO DOWN TO THE BORDERS AN PUSH YOUR SHOTS / SO CALLED VACCINE GET THOSE PEOPLE VACCINATED THAT ARE COMING IN FROM EVERY WALK OF LIFE ..

If this administration would stop cramming it down people’s throats and also stop lying about the vaccine, more people might listen.

really you say it works???a friend of mines daughter has it now for the 3rd time since February and she has had BOTH SHOTand you say she's safe, SAFE FROM WHAT

President Biden declared war on nearly 80 million unvaccinated Americans as well as GOP governors, claiming “pandemic politics” actions are undermining efforts as he unveiled the most aggressive and unconstitutional COVID vaccine mandates that will force 100 million federal government workers to get the shots or lose their jobs while using his sweeping power of the office to impose stringent new mandate rules on private sector businesses.
PRESIDENTIAL ELECTION・14 DAYS AGO
WashingtonExaminer

Chris Christie comes back to reality

No leading Republican did more to legitimize Donald Trump, as he was battling to secure the party’s nomination in 2016, than Chris Christie. And yet this week, the former New Jersey governor took dead aim at both Trump and his more ardent followers. Speaking at the Ronald Reagan Presidential Library,...
POLITICS・12 DAYS AGO
Daily Free Press

Last Thursday, former Republican New Jersey Governor Chris Christie gave a speech at the Reagan Library that reminded me of why he inspired so much excitement in Republicans just a decade ago. Christie discussed the party’s future and scolded Republicans plenty, including indirect shots at former President Donald J. Trump.
POLITICS・8 DAYS AGO

Democrats are turning to vaccine requirements and Covid mandates in a tricky political environment.
VIRGINIA STATE・12 HOURS AGO
Daily Beast

This $100,000 Donation by Matt Gaetz Raises All the Eyebrows

On the day Donald Trump’s second impeachment trial began in the Senate, the campaign for embattled Rep. Matt Gaetz (R-FL)—reportedly under federal investigation since the summer for alleged sex crimes with an underage teen—made by far its largest ever political contribution: $100,000 to a mysterious nonprofit created to defend the then-president.
CHARITIES・4 DAYS AGO
CBS News

On Tuesday, Florida Governor Ron DeSantis announced that Dr. Joseph Ladapo will be the state's new surgeon general and secretary of the state's health department. "Joe has had a remarkable academic and medical career," DeSantis said at a news conference. "We feel that Joe is just the right guy for the job."
FLORIDA STATE・1 DAY AGO
FOX 17 News West Michigan

The recent front-page stories regarding vaccinations were so slanted to shame and blame the unvaccinated that I am compelled to write. Let me be clear: I am not an anti-vaxxer or whatever label is applied. I have been vaccinated many times in my life. I don’t believe COVID shots should be mandated. If you want the jab, by all means, go for it. If you don’t, then the risk is yours and yours alone.
PHARMACEUTICALS・2 DAYS AGO
New Jersey Monitor

Two-year-old toddlers aren’t known for being good listeners or keeping their hands to themselves. Now, under Gov. Phil Murphy’s new mask mandate, they’ll be expected to keep their mouths and noses covered for hours at a time. Murphy’s Monday announcement that children ages 2 and up will need to wear masks in all day care […] The post Republicans slam Murphy’s masking requirement for 2-year-olds in day care appeared first on New Jersey Monitor.
POLITICS・2 DAYS AGO
WXYZ Detroit - 7 Action News

Lawmakers OK $55B budget bills; $7.5B in virus relief left

Michigan lawmakers who finished passing the state budget Wednesday will next turn to allocating an unprecedented amount of federal COVID-19 rescue funding — money that largely is flexible and can be spent however the state decides.
PUBLIC HEALTH・1 DAY AGO
Ohio Capital Journal

The Republican Speaker of the Ohio House, under mounting pressure from the nascent anti-vaccination movement within the GOP, said his caucus is soon to unveil consensus legislation to ban vaccine mandates. Speaker Bob Cupp, R-Lima, said to reporters Wednesday that House leadership is in the “final stages” of putting together a bill to erect legal […] The post Ohio House Speaker leans into ‘medical freedom’ appeared first on Ohio Capital Journal.
HEALTH・7 HOURS AGO

As mandates grow, sites connect the unvaccinated to jobs that don't require it

HARRISBURG, Pa. — As more companies and industries implement vaccine mandates, new sites are popping up to connect prospective employees who don’t want the COVID-19 jab with jobs that don’t require vaccination. Job boards for each state have been posted on Gab, a social networking site popular with some conservatives...
HARRISBURG, PA・4 HOURS AGO
The US Sun

MILLIONS of eligible Americans will receive a second round of the Golden State Stimulus II payment worth $1,100, the California Franchise Tax Board announced this week. The payments, released Friday, September 17, will reach direct deposit recipients first. To qualify for the second round of payment, you must file your...
NEW YORK CITY, NY・6 DAYS AGO
The Independent

If Amy Coney Barrett means what she just said, she should resign from the Supreme Court right now

While speaking at a lecture hosted by the University of Lousville’s McConnell Center, Supreme Court Justice Amy Coney Barrett expressed faux concern over the American public’s belief that the highest court in the country has become partisan. After she was introduced by the Republican Senate Minority Leader and proud partisan goblin Mitch McConnell (R-KY) — and no, even Veep writers couldn’t have made this mess up — Barrett said justices should be “hyper-vigilant to make sure they’re not letting personal biases creep into their decisions, since judges are people, too.” She went on to insist that “judicial philosophies are not...
CONGRESS & COURTS・10 DAYS AGO
news4sanantonio.com

The Biden administration has been ensnared once again by another crisis at the southern border, this time with thousands of Haitian migrants near Del Rio, Texas. The state’s governor, Greg Abbott appeared on "The Ingraham Angle" to discuss the situation. GOV. GREG ABBOTT: "The Biden administration refuses to even pretend...
DEL RIO, TX・3 DAYS AGO
Indy100

Millions of people in the United States have lost jobs amid the coronavirus pandemic. with Covid enhanced unemployment benefits ending this week. Yet, despite this, Senator Ted Cruz (R-Texas), decided to dish out some advice for Americans: get a job. The Republican senator shared a link to a ABC News...
CONGRESS & COURTS・15 DAYS AGO
WashingtonExaminer

DEL RIO, Texas — The Biden administration has requested the Pentagon send the military to the southern border to help regain control after thousands of Haitian migrants swarmed over the Rio Grande into Texas. The admission was the first time Homeland Security Secretary Alejandro Mayorkas has confirmed DHS is seeking...
DEL RIO, TX・3 DAYS AGO
southarkansassun.com

Legislators want to raise enough money from business taxes to fund the $1,400 stimulus payments, so two more stimulus checks may be on the way. In a recently published article in WBEX News, Democrats are about to support not one, but two more $1,400 checks in the near future, if they so choose. Following a recent vote in the House of Representatives to approve a $3.5 trillion budget plan, the party in charge of both Congress and the White House is now ready to move on to a social spending program.
CONGRESS & COURTS・16 DAYS AGO