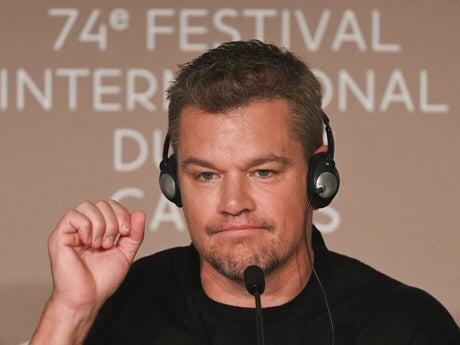 Matt Damon has said that he “worries” about his new film Stillwater being potentially mis-marketed as a Taken -style thriller.

Stillwater is the latest drama from Spotlight director Tom McCarthy , and sees Damon play Bill Baker, a “roughneck from Oklahoma” who tries to exonerate his daughter from a murder charge while she is imprisoned in France.

Damon discussed the film on Marc Maron ’s WTF podcast. Maron introduced the film by saying: “When my producer told me about the movie, and what it’s about, it’s a guy who goes to save his daughter, I’m like, ‘Oh, it’s gonna be a franchise thing?”

“That’s the thing. It feels like it’s gonna be a Liam Neeson movie, right?” replied Damon.

“That’s why I worry if they sell it too much like a thriller. It’s a thriller set-up, but it really is a drama.”

The podcast host then asked Damon whether he had a “discussion” about how the film would be sold to audiences, and whether the film’s writer was upset about how it had been marketed.

“No, no, no, this is me kind of lobbing a grenade from the sideline,” Damon responded. “I’m not a producer on the movie. I’m just an actor on this one.

“Listen: there are always these debates about, do you bait and switch? Do you try and get people in the theatre and then they’re so wowed by the movie...? But I’ve never, ever, ever believed that. I think you gotta be completely honest with the audience. This is what this movie is.”

The film has earned broadly positive reviews from critics, with Damon’s performance often singled out for particular praise.

Stillwater is out in UK cinemas on 6 August.

Damon is an insult to this country, he spent time with an American family to play an American?What a stretch?

No worries Matt, everyone knows you're a libtard. Plus who wants to promote Hollyweird anyways.

8 movies leaving Netflix you have to watch before August ends

Before the month ends, check out movies like "The Social Network," "The Big Lebowski," and "Election."
MOVIES・22 DAYS AGO
d1softballnews.com

About ten years ago The Stillwater Girl, directed by Tom McCarthy (Oscar winner for Spotlight) and presented out of competition at the Cannes Film Festival, it should have been a film nourished by the Mediterranean noirs of writers such as Andrea Camilleri, Massimo Carlotto and Jean-Claude Izzo, the latter author of a trilogy set just in Marseille, a city that the director considered the perfect location for a not entirely convincing story. The meeting with two French screenwriters, Thomas Bidegain and Noé Debré, reflections on the collapse of American moral authority during the Trump administration, the fascination with the court case of Amanda Knox, accused in 2007 in Italy of the crime of Meredith Kercher, and the collaboration of Matt Damon allowed him to give body and soul to a film that Universal will distribute in Italian cinemas today, 9 September.
MOVIES・13 DAYS AGO
GQMagazine

The Evolution of Matt Damon

No one notices the masked man sitting on a bench at the back of the Malibu Seafood Fresh Fish Market & Patio Café’s covered seating area. Nobody catches—floating in the warm ocean breeze above the drone of the cars on the Pacific Coast Highway and the smush of the crashing waves beyond—any of the telltale snippets that might prod them to look twice:
NEW YORK CITY, NY・14 DAYS AGO
codelist.biz

Matt Damon was also hit by the social media hype. However, he only has a “very private Instagram account”. Is Matt Damon (50) now conquering social media? As the actor revealed in an interview with GQ magazine, he has a “very private Instagram account”. He mainly uses this to keep in touch with close friends. “I have 76 followers and I’ve made 40 posts since 2013,” says Damon. His most recent post is a photo of his 15-year-old daughter Isabella, who holds up her middle finger: “She does that now every time we take a photo of her.”
CELEBRITIES・10 DAYS AGO

Blacklight, an upcoming action thriller starring Liam Neeson, has released its first image. Blacklight will tell the story of an FBI fixer who gets in way over his head after getting involved in a deadly conspiracy. The film is directed by Mark Williams from a script by Nick May. Williams directed last year's Neeson vehicle, Honest Thief. On top of Neeson, Blacklight also stars Aidan Quinn (Elementary), Emmy Raver-Lampman (The Umbrella Academy), and Taylor John Smith (Sharp Objects).
MOVIES・20 HOURS AGO
AOL Corp

Matt Damon may not have any public social media accounts, but that doesn't mean the 50-year-old actor isn't keeping up with his family and friends online. In a new cover story for GQ, Damon reveals that he has "a very private Instagram account." “I have 76 followers and I’ve done...
CELEBRITIES・13 DAYS AGO
d1softballnews.com

The Stillwater Girl: Good Matt Damon fights for his daughter

P.presented at the last Cannes Film Festival, The Stillwater Girl directed by Tom McCarthy (The Spotlight case) is released today in Italian cinemas after a series of controversy launched by Amanda Knox – convicted, and then acquitted, for the murder of Meredith Kercher in Perugia in 2007. Self in fact...
MOVIES・12 DAYS AGO
weisradio.com

Matt Damon has finally joined Instagram, but don’t expect to find his account anytime soon. Speaking with GQ, the 50-year old actor confessed that the reason he’s never joined any social media platforms is because he “just never saw the point [of them.]”. “And I feel better and better about...
CELEBRITIES・13 DAYS AGO

Jodie Comer looked ready for battle as she appeared on horseback in a new image from her upcoming film The Last Duel. The Killing Eve actress stars alongside Matt Damon, Ben Affleck and Adam Driver in the historical drama directed by Ridley Scott which is set to premiere at The Venice Film Festival on Friday, September 10.
MOVIES・14 DAYS AGO
ravallirepublic.com

Matt Damon reflects on 'painful' backlash over past #MeToo comments

Back in December 2017, the Jason Bourne actor called for a "spectrum of behavior" analysis in regards to sexual misconduct cases noting that some are more serious than others. After the statements hit headlines with Damon accused of being "tone-deaf" in his understanding of abuse, he issued a public apology.
CELEBRITIES・12 DAYS AGO
codelist.biz

You have to look carefully to see Matt Damon. He is wearing a yellow vest and a hard hat, his face is hidden behind sunglasses and a thick beard. Bill Baker, the hero of Stillwater, cleans up. He stands in a landscape of rubble left by a tornado. Dismantles walls...
SOCCER・13 DAYS AGO
Yardbarker

The coverage of Matt Damon has been exhaustive this summer — well, over the last 25 years, really, but especially this summer with his strange LGBTQ+ slur controversy and the starkly contrasting five-minute standing ovation for Stillwater at Cannes. And yet, as the October cover star for GQ, Damon still...
CELEBRITIES・13 DAYS AGO

Matt Damon has never embraced social media. Like many celebrities determined to keep their private lives private, he's shied away from opening that door to the public. Recently, in a great interview with GQ, he explains his choices and reveals that he does, indeed have a secret Instagram account. And fans believe they've discovered what Matt Damon is hiding.
CELEBRITIES・13 DAYS AGO
Complex

Matt Damon revealed his permanent tribute to his good friend Heath Ledger. In his new GQ cover story, the Oscar-winning writer/actor opened up about his collection of arm tattoos, and how they each represent someone important in his life. Damon said he got his first two tats in 2013, after his wife, Luciana Barroso, brought up the idea.
CELEBRITIES・13 DAYS AGO
The Independent

Matt Damon’s new film The Last Duel divides critics: ‘Like Game of Thrones with a soupçon of Monty Python’

The first reviews for Matt Damon’s new film The Last Duel are in, and the response has been decidedly mixed. Directed by Ridley Scott, The Last Duel is a historical drama set during the Hundred Years War, which stars Damon as a knight who fights in France’s last-ever legally sanctioned duel.
MOVIES・11 DAYS AGO
mediaite.com

Matt Damon fans have managed to sleuth out his secret Instagram account. While the Stillwater star is not very active on social media, as he “never saw the point,” he admitted to having “a very private Instagram account,” during a recent profile for GQ. “I have 76 followers and I’ve...
CELEBRITIES・13 DAYS AGO

“Stillwater” with Matt Damon: The Angel with the Malocher eyes

E.The tough “Roughnecks”, as the tirelessly working but lazy oil drills in Oklahoma are called, first had doubts when Matt Damon came up to them to do a bit of role studies. They worried that Hollywood was trying to denigrate them again, as it did back in 2012, in “Promised Land” directed by John Krasinski.
STILLWATER, OK・14 DAYS AGO
AOL Corp

Before the release of 1997’s “Good Will Hunting,” best friends Matt Damon and Ben Affleck were a couple of 20-something actors and aspiring writers still hoping for a huge breakout experience in Hollywood. After its release, they were legitimate big screen stars and the youngest ever winners of the Academy Award for best original screenplay.
CELEBRITIES・13 DAYS AGO
hotnewhiphop.com

Matt Damon Opens Up About Sentimental Heath Ledger Tattoo, “He Was Really Special”

Like so many others, Matt Damon chooses to get tattoos that commemorate the important people in his life. When he sat down with GQ for his most recent cover story interview, the 50-year-old opened up about the permanent tributes he’s gotten inked. As it turns out, Damon’s wife, Luciana Barroso,...
CELEBRITIES・11 DAYS AGO