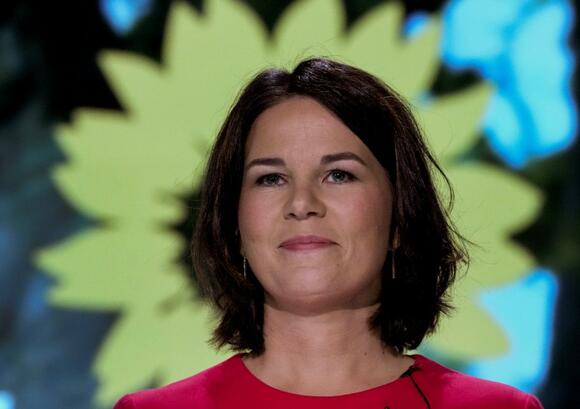 German-Russian energy ties are more entrenched than just Nord Stream 2, but can the urgency of climate change give Baerbock the boost she needs?

After Germany faced a series of devastating floods, fighting climate change might become a bigger priority. This can dramatically affect the upcoming September elections and give Annalena Baerbock, the Greens candidate, a boost in the polls.

If the Greens rise to power, how will this change Germany's policies toward Russia? Baerbock has campaigned on the promise to withdraw political support for the Nord Stream 2 pipeline and to take a tougher stance on Russia. But will she be able to do it? Probably not.

The problem that Baerbock will face is much larger than the cancellation of just one pipeline. She will need to disengage Germany from Russian energy. Like any industrialized country, Germany needs an abundance of energy, and its economy has been built on cheap and convenient access to Russian resources: no country other than Russia can provide the necessary volumes at the right price. Norway, another prominent natural gas exporter to Germany, simply does not have the needed capacity, while imports of U.S. and Qatari Liquified Natural Gas (LNG) tend to be more expensive.

Meanwhile, BASF, a major German petrochemical company—the largest in Europe—has very close ties with Russian energy giant Gazprom. Since 2003, BASF's full subsidiary, Wintershall, a major German oil and gas producer, has had access to lucrative gas fields in Western Siberia. It continues to produce gas from Siberia and send it back home to Germany. Petrochemical production in Germany is thriving.

More from The National Interest The EU Needs to Think Long-Term in Its Relationship with Russia Pipeline Politics: What Will Energy Diplomacy Look Like After the German Elections? Is Germany's Bipartite Russia Policy Contradictory?

Meanwhile, Gazprom and Wintershall have had numerous asset swaps and Gazprom now owns several of the largest German gas stores. Germany and other European countries rely heavily on these storages during shortages.

In May 2019, the merger of German oil and gas companies Wintershall and DEA came from the consolidation of BASF capital and Russian money. A new oil and gas company, WIntershall DEA, was born with BASF (sixty-seven percent) and Letter One (thirty-three percent) as shareholders. Letter One was a company sponsored by a Russian billionaire, Mikhail Fridman, who has close ties to Russian president Vladimir Putin. Russian billionaires do not tend to be independent business people but holders and managers of Kremlin money.  To meet Western standards, Fridman hired a former BP CEO, Lord Brown, to run the company. Lord Brown changed Letter One to DEA, registered it in Germany, and merged it with the Wintershall. By 2021 the company became a major European oil and gas producer. Whether a newly-elected Chancellor will be willing or able to fight these powerful business interests remains to be seen.

It can be argued, however, that the urgency of climate change will help Annalena Baerdock to force Germany's shift away from oil and gas. While the argument has a lot of merits, it has to be checked by reality. First, the petrochemical industry remains in demand for the foreseeable future, and gas will be needed as a feedstock.  Second, Germany's auto industry, which is shifting to electric cars, will continue to require an abundance of electricity. Currently, wind and coal are the leading electricity producers in Germany but coal has to be replaced. Gas will be the easiest choice for replacement. Third, the hydrogen that Germany currently pushing for will need to be produced as well. The cheapest and fastest way to make it is from natural gas.

Ironically, in order to substitute oil and gas with green energy, Germany will still need massive inflows of natural gas—at least for the transition period. And this period might be unexpectedly long. During that period, the essence of the Russian – German relationship will remain the same: Germany will need natural gas, and Russia will be willing to deliver.

The Russian state TV host agreed with Vladimir Putin that Russia would be prepared to use nuclear weapons if they felt it was necessary to defend their country.
MILITARY・2 DAYS AGO
Daily Mail

Vladimir Putin has escaped to his secret lakeside 'palace' amid brutal suppression of anti-mobilisation demonstrations in Moscow and St Petersburg. Despite denials from the Kremlin, Putin appears to have vanished on holiday to his 'most secret official dacha' in northern Russia. The residence, nestled in the forests of the Valdai...
PROTESTS・21 HOURS AGO
Business Insider

An ex-US Army general who witnessed Russia's basic training of recruits says it was awful, and the 'newbies' being drafted face disaster on the front line

A former US Army general said that Russia's announced mobilization of 300,000 reservists was a "jaw-dropping" sign of weakness. Mark Hertling, who commanded the US Army Europe, explained in a Twitter thread that he has personally witnessed how the Russian army is "poorly led and poorly trained." The poor training,...
MILITARY・1 DAY AGO
Newsweek

The upcoming referendums being held by Russia-backed separatists in Ukraine may give Russian President Vladimir Putin what he needs to justify a nuclear strike. This week, Russian state-run news agency Tass reported that separatists in four territories of the Donbas region will hold referendums on joining Russia from September 23 to 27. Such votes had previously been prohibited by law from taking place.
POLITICS・1 DAY AGO

Vladimir Putin’s defense minister sent a clear message to the people of Russia on Wednesday: Their country is at war not just with Ukraine, but with the entirety of the West. “I cannot but emphasize the fact that today, we are at war not so much with Ukraine and...
POLITICS・3 DAYS AGO
The Associated Press

DUBAI, United Arab Emirates (AP) — Iran’s Foreign Ministry said Sunday it summoned Britain’s ambassador to protest what it described as a hostile atmosphere created by London-based Farsi language media outlets. The move comes amid violent unrest in Iran triggered by the death of a young woman in police custody. The state-run IRNA news agency reported the ministry also summoned Norway’s ambassador to Iran and strongly protested recent remarks by the president of the Norwegian parliament, Masud Gharahkhani. The death of 22-year-old Mahsa Amini in custody after being detained by Iranian morality police launched unrest across Iran’s provinces and the capital of Tehran. Protests over Amini’s death have spread across at least 46 cities, towns and villages in Iran. State TV has suggested that at least 41 protesters and police have been killed since the protests began Sept. 17. An Associated Press count of official statements by authorities tallied at least 13 dead, with more than 1,200 demonstrators arrested.
PROTESTS・39 MINUTES AGO