Michael Strahan’s son flies mostly under the radar; however, he was pictured in vacation photos posted by his father, whom he resembles a great deal. Get acquainted with the lowkey junior Strahan.

Michael Strahan recently enjoyed a vacation with his family and friends, and fortunately for his fans, he shared some shots from the joy-filled getaway that showcased how much fun they had together.

It also gave his fans a chance to get a good look at his rarely sighted only son, Michael Strahan Jr. The 26–year–old was pictured posing alongside his sisters as they sat down to enjoy a meal.

There were three men in the first picture Michael Sr shared, but the close resemblance between father and son made it easy to pinpoint who was who among them. The third seemed to be a friend of Michael Sr.

Another picture the former NFL star shared was one that captured him posing with his twin daughters, who wore happy smiles, glad to be able to enjoy more time with their beloved papa.

It is no secret that Michael enjoys spending time with all four of his children, and this vacation is just one of many he has taken with them in tow, and when he is not taking exotic trips with them, they actively participate in relatively mundane activities like enjoying dinner together.

His Instagram page is filled with photos that immortalized such moments. Keep reading to find out more about his kids and the women he shares them with. 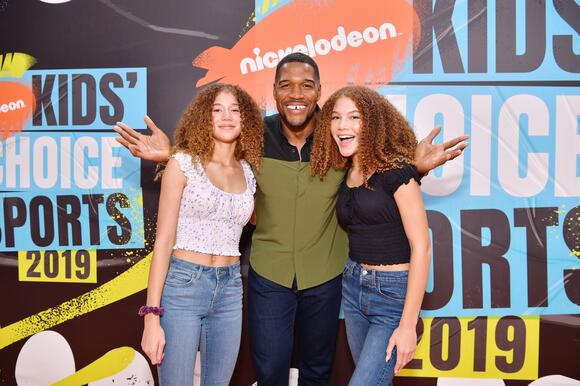 The first woman Michael Strahan married was an interior designer named Wanda Hutchins. The two met when he was 17 and living in Germany, where his father was stationed.

He was 20 when they tied the knot in 1992 and had two kids together before their divorce in 1996 after four years of marriage. They remained close friends as they made efforts to co-parent their children who stayed behind in Germany with their mother.

Despite the split, Michael made sure to keep up with his responsibilities as a father, constantly shuttling between Germany and the US to make memories with his kids. When they got old enough, they attended high school in Houston, Texas, Strahan’s hometown.

Michael found love again — or thought he did — with a woman he met at a salon. Her name is Jean Muggli, and they tied the knot in 1999.

They finally settled, in November 2020, for a shared custody arrangement. By 2004, they welcomed their twin daughters Isabella and Sophia, but he filed for divorce from her some months later, and the split was rather acrimonious.

Michael accused her of emotionally and physically abusing their daughters, but she vehemently denied the allegation. After he filed for divorce, she claimed he had domestically abused her after an argument over money.

He also denied the accusation, and in a statement he released at the time, he revealed his desire to end the marriage “and with dignity.” Most of 2020 passed with the two battling over who gets custody of their daughters.

They finally settled, in November 2020, for a shared custody arrangement that sees them alternate weeks of living with the girls. So far, it seems to have been working out.

Tanita is Michael’s eldest child and daughter. She was the only daughter he had with his first wife and was born the year before he was drafted to the New York Giants.

She is an artist who enjoys painting and sharing her works on her social media feeds. The talented woman recently started putting her pieces up for sale, and her father has been right there supporting her.

Michael Strahan Jr is Michael’s second child with Hutchins. They welcomed him in 1995, just when his father’s football career was taking off.

He is an educated graduate of the University of Texas at San Antonio and has also appeared on GMA as a guest alongside his father in the past.

It could be argued that these two are the very apple of Michael Sr’s eyes, but in truth, he has no favorites. Isabella and her sister Sophia were born in 2004, making them half-sisters to Tanita and Michael Jr.

The two girls are absolutely gorgeous and often share pictures of themselves on their respective social media feeds. Being born into a rich home, they have lived privileged lives, and their snaps often display locations from around the world.

Congratulations on continuing to be a supportive and involved dad no matter what else happens. Being in your children's life is the absolute best gift they'll ever receive. God blesz

Patty Duke was abandoned by her parents and forced to live with her managers for her career's sake. She kept trying to please them to avoid being sent off again. Most people knew Patty Duke as an impressive actress, recipient of many awards. But before achieving fame and fortune, she was just Anna Marie Duke, a child actress abandoned by her mom and abused by her managers.
NEW YORK CITY, NY・3 DAYS AGO
Amomama

Monica Calhoun became popular after playing Mia in "The Best Man," but these days, the 50-year-old enjoys life as a single mom, caring for her special needs son. Monica Calhoun has gone about her life as a single mom to her blind son with pride. However, the actress does not seem to have let things get in her way, as she recently shared a new picture showing she still has her groove.
CELEBRITIES・3 DAYS AGO
Amomama

Before their lavish wedding, NBA legend Magic Johnson tried to call off his wedding to Cookie three times but was successful only twice. Now they have been married for thirty years. See their heart-melting anniversary messages. Lakers champion Magic Johnson found a brilliant woman, Cookie, to call his own in...
NBA・3 DAYS AGO
Amomama

Venus Williams has enjoyed a storied career in lawn tennis and is regarded as one of the best players ever to play the game. However, she has never been married and has no child of her own. Find out why. Venus Williams is the older of the famous Williams sisters,...
NFL・3 DAYS AGO

Michael Strahan may be recognised now as a popular member of the Good Morning America team, but before his daytime TV success, he was a football star. The 49-year-old started playing professional football for the NFL when he was just 17, even winning a Super Bowl. Last month, he revealed...
NFL・8 DAYS AGO
Hello Magazine

Michael Strahan has opened up about something he says he has never spoken publicly about before. The Good Morning America host has revealed his personal anguish before fame and admitted there were times he felt utterly alone. The former NFL player shared an emotional message with fans in the second...
NFL・22 HOURS AGO
Sports Illustrated

Good Morning America anchor Michael Strahan is teaming up with SMAC Entertainment’s Constance Schwartz-Morini to produce a documentary about the Bishop Sycamore football program in Ohio. The documentary will focus on how the school was founded, obstacles players faced along the way and their current predicament. Also, Strahan and company have secured exclusive access to former Bishop Sycamore coach Roy Johnson, who was fired for a myriad of reasons.
TV & VIDEOS・10 DAYS AGO

Michael Strahan celebrated Labor Day by eating. Like eating big. The NFL Hall of Famer, Fox Sports analyst and Good Morning America co-host opted to share what he was eating Monday morning. Michael Strahan, obviously, believes that a big breakfast is a key to your day. He listened to his mother growing up.
NFL・12 DAYS AGO
NFL

Michael Strahan reflects on the events of 9/11, 20 years later

Former NFL DE Michael Strahan reflects on the events of September 11th, 20 years later. A special thanks to the 9/11 Memorial & Museum. Visit their website for more information:https://www.911memorial.org/visit/museum.
NFL・8 DAYS AGO
WWD

Click here to read the full article. Michael Strahan cares about his skin but he doesn’t want to fuss over it. And so the former athlete and entrepreneur is expanding his brand of tailored clothing, athleisure, denim and accessories into skin care this fall.More from WWDPhotos of Celebrities Wearing Pantone's Spring 2022 ColorsPantone's 2022 New York Fashion Week Color PaletteDerek Lamb 10 Crosby's Anniversary Capsule Collection Five products will launch later this year in-store and online with Men’s Wearhouse, a key partner for the Michael Strahan collection. It will also be available at other specialty stores in the U.S. “How you present yourself...
BEAUTY & FASHION・11 DAYS AGO
Outsider.com

There’s a lot that the world of football just can’t seem to get right this year. Between boring them to death with Ed Sheeran’s performance for kick-off and then dousing them in sewage, it’s been a little rough. Even Eli Manning faced a hilarious blunder, but he took it head-on like a champ. It looks like the torch is handed off to Mr. Michael Strahan now to get us back on track for a year of tailgates, bonfires, and football.
NFL・2 DAYS AGO

Michael Strahan Says He Was ‘Just Surviving’ In High School

Michael Strahan is opening up about his earlier years in football and life. On Thursday (Sept. 16), the former NFL star-turned Good Morning America host shared a clip from his episode of Uninterrupted’s ESPN series More Than an Athlete. In the video, the 49-year-old reflects on his path from childhood in German to New York Giants defensive end, and eventually, television personality.
NFL・1 DAY AGO
Hello Magazine

Beyoncé is notoriously private when it comes to her family life but delighted fans on Monday after sharing a rare photo with her youngest daughter Rumi. The Black Parade hitmaker took to Instagram to share a series of snapshots from her vacation, and it looked liked they were having the best time!
CELEBRITIES・5 DAYS AGO
Amomama

Michael Jordan's daughter, Jasmine Jordan began the new week with a trip to the zoo, then she shared photos flaunting her enviable legs in a black dress while posing near a gigantic diplodocus. Jasmine Jordan is Michael Jordan's oldest daughter and last child from his first marriage. The young lady...
CELEBRITIES・21 DAYS AGO
Hello Magazine

Carrie Underwood appears to have welcomed a new guest into her household – and it has quickly become a member of the family. The country superstar shared a rare video of her sons, Isaiah, six, and Jacob, two, on Monday, playing with a frog that has been "hanging" around the family home.
FAMILY RELATIONSHIPS・4 DAYS AGO
Closer Weekly

Tom Cruise and Nicole Kidman are no longer together, but the A-listers are the parents of their two kids, Isabella Cruise and Connor Cruise. Although fans sometimes forget about the ex-pair’s relationship, Tom and Nicole’s rare family photos prove they once shared special memories. The Top Gun star and the...
RELATIONSHIPS・10 DAYS AGO
Hello Magazine

Kelly Ripa shares rare family photo of her three children – and it's bittersweet!

Kelly Ripa is a doting mom to three grown-up children, and at the start of the month she reflected on new beginnings. Now that she and Mark Consuelos are empty nesters, the Live with Kelly and Ryan star looked back at a time when all her children were being taken to school together.
FAMILY RELATIONSHIPS・14 DAYS AGO
Amomama

Jeannie Mai and her ex-husband, Freddy Harteis' marriage ended terribly. However, a few years after their divorce, the pair are happy after finding love again. Let's look into the circumstances surrounding their marriages. Jeannie Mai remains one of the most talked-about television presenters and stylists in America. Over the years,...
RELATIONSHIP ADVICE・6 DAYS AGO