House of the Dragon: Olivia Cooke teases details about role in Game of Thrones spin-off series 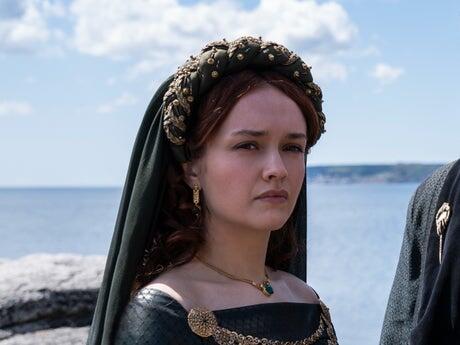 Olivia Cooke has given her first interview about her new role in the Game of Thrones spin-off series House of the Dragon .

In the forthcoming show, the actor plays Alicent Hightower, a queen who goes up against a Targaryen for control of the Throne.

House of the Dragon will be based on George RR Martin ’s most recent Thrones book, Fire & Blood .

Speaking to Collider , Cooke said: “I don’t know if I can say anything without really giving it away.

“She’s very complex and I think people are gonna want to see the worst in her,” she continued. “What’s amazing about Game of Thrones , like we saw in the past series, is that one season, you hate a character, and the next, you absolutely love them and will go to the ends of the earth for them.”

The Ready Player One star also said that it helped that the story is set 100 years before the events of Game of Thrones.

“We’re in the world of Game of Thrones , but you can also put yourself in a different headspace as well and know that, for an actor, you don’t have to necessarily follow on from what anyone else is doing,” she said.

“But at the same time, yeah, it’s utterly bizarre, after the year or year and a half, of f***ing 10 years that we’ve had, looking down and just being like, ‘What am I wearing? What am I doing? This is mad.’”

House of the Dragon is expected to air in 2022.

Sept. 16 (UPI) -- Hannah Waddingham says she "loved" her role as the "shame nun" on Game of Thrones. The 47-year-old actress discussed her role as Septa Unella and her friendship with her Game of Thrones co-star Lena Headey during Wednesday's episode of Jimmy Kimmel Live!. Waddingham played Unella, the...
CELEBRITIES・9 DAYS AGO
Daily Mail

House Of The Dragon: Actor brandishes a spear as others are tied to wooden spikes for another day of filming Game of Thrones prequel

Game of Thrones fans are waiting eagerly for House Of The Dragon, the prequel series which takes place 300 years before the HBO hit. And filming for the upcoming show continued on Wednesday as cast and crew gathered at Holywell Bay in Cornwall. One male actor was dressed in flowing...
MOVIES・10 DAYS AGO
epicstream.com

A while ago, it was announced that Netflix is working on a new live-action Addams Family series called Wednesday that will be directed by Tim Burton and written by Smallville creators Al Gough and Miles Millar. You star Jenny Ortega is set to play Wednesday Addams and now we find out that someone from Westeros is joining the series.
TV SERIES・11 DAYS AGO
The US Sun

ON SET pictures from the Game of Thrones prequel House of Dragon show bloody prisoners bound and battered. Proving it's not one for the faint-hearted, fans of the fantasy books can prepare to enjoy an abundance of gore and ghastly sights. The prequel to the popular HBO series started filming...
TV SERIES・10 DAYS AGO

House Of The Dragon: Filming Underway In Cornwall On Game Of Thrones Prequel

Game of Thrones fans, get excited – House of The Dragon is now in production, and the dramatic new scenes have been spotted being filmed underway here in Blighty. The new series, which is a prequel to the hugely popular HBO drama, will be focusing on the origins of the House of Targaryen, and has already attracted some of Britain’s acting heavyweights such as Matt Smith, Rhys Ifans and Emma D’Arcy.
TV SERIES・10 DAYS AGO
The Independent

Kit Harington has revealed that he turned down a superhero role while he was starring in Game Of Thrones. Harrington is due to appear in upcoming Marvel film Eternals, where he is set to play one of the few human characters in the film, Dane Whitman – known in the comic book series as Black Knight.Speaking to Total Film, Harington said he turned down an offer to play a superhero character previously, because he was still appearing in the hit HBO series playing Jon Snow.“I won’t mention what it was, but yeah, there was one other [superhero film] that I...
MOVIES・9 DAYS AGO
asapland.com

Game of Thrones show runners speak about the final season

Game of Thrones showrunners speak about the final season. Game of Thrones has captured largest part of people’s choice. Everyone is under its spell due to its tremendous work. Game of Thrones has gained special love of its audiences because the politics, sexual scenes, games all are so passionate. It has completed 8 seasons and every season will keep you engaged with its story and everything.
TV SERIES・7 DAYS AGO
Winter is Coming

Do you need to watch Game of Thrones to understand House of the Dragon?

When House of the Dragon arrives on HBO in 2022 it will be a big moment for Game of Thrones fans who have been eagerly awaiting the new series. But for anyone who hasn’t watched Game of Thrones (and there are quite a few people out there who haven’t) it’s not necessary to binge the original series in order to enjoy the new show.
TV SERIES・10 DAYS AGO

If you're going through fantasy withdrawals, have no fear: "The Wheel of Time" and "The Witcher" are here to transport you to other realms, where swordplay and magic are on tap. Since "Game of Thrones" went off the air in 2019, there's been a sizable gap to fill in terms...
TV SERIES・7 DAYS AGO
Gamespot

The Batman is scheduled for a March 2022 release date, but Warner Bros. is already excited enough about the film that it's begun looking at spin-off series. A series centered on the Penguin, as portrayed in The Batman by Colin Ferrell, is in development at HBO Max, Variety reports. This...
TV & VIDEOS・12 DAYS AGO
Daily Mail

Matt Smith looked well and truly in character as Prince Daemon Targaryen as he filmed scenes for House Of The Dragon at Kynance Cove in Cornwall. The actor, 38, looked worlds away from his usual self as he sported a mane of bleach blonde hair for the role in the Game Of Thrones prequel series.
MOVIES・5 DAYS AGO
lakers365.com

Basketball Is to HBO’s New Lakers Series What Dragons Were to Game of Thrones, Says Writer

Not a whole lot is known about HBO's untitled Los Angeles Lakers limited series based on the book Showtime: Magic, Kareem, Riley and the Los Angeles Lakers Dynasty of the 1980s. The sports drama is being developed by Adam McKay (Vice, The Big Short), Jim Hecht (Ice Age: The Meltdown) and Max Borenstein (Worth, Godzilla vs. Kong) and has assembled an impressive cast of talent ranging from John C. Reilly (Jerry Buss) and Adrien Brody (Pat Riley) to Sally Field (Jessie Buss) and Jason Segel (Paul W...
LOS ANGELES, CA・4 DAYS AGO

Hall, who had a minor role on Game of Thrones playing Hugh of the Vale in two episodes, will play twins on the prequel series. Also joining the cast are Ryan Corr, David Horovitch, Matthew Needham, Bill Paterson and Gavin Spokes.
TV SERIES・1 DAY AGO
imdb.com

The world of Westeros continues to grow as the long-awaited Game of Thrones prequel, House of the Dragon, adds more members to its clan. HBO has announced that seven new members have joined the cast of the highly-anticipated drama series, including Ryan Corr, Jefferson Hall, David Horovitch, Graham McTavish, Matthew Needham, Bill Paterson, and Gavin Spokes. These seven new cast members join an already stacked cast for the series, set to premiere in 2022.
TV SERIES・1 DAY AGO
NME

House Of The Dragon, the upcoming prequel to HBO‘s Game Of Thrones, has announced seven new additions to its ensemble cast. The 10-episode series is currently filming, and is due to reach the streaming service in January 2022. Joining the show are Ryan Corr, Jefferson Hall (Vikings, Devs), David Horovitch,...
TV SERIES・1 DAY AGO
thebrag.com

Aussie actor Ryan Corr is among the seven new cast members announced for House of the Dragon, the upcoming prequel to Game of Thrones. Corr, who has previously starred in local TV series like Packed to the Rafters and Bloom, will portray the character of Ser Harwin ‘Breakbones’ Strong in the new HBO series.
MOVIES・1 DAY AGO
wegotthiscovered.com

A Song of Ice and Fire writer and the man behind the creation of Westeros has revealed that the upcoming spinoff show to HBO’s Game of Thrones will feature 17 dragons. You heard it, folks. It seems that the network is pulling out all the big stops for the prequel series, currently in production and titled House of the Dragon. We all remember a time where the first few seasons of the original show could barely set aside the budget for Daenerys’s three small dragons, let alone 17 fully grown ones. George R.R. Martin’s fictional universe has come a long way since then, and expectations are high for the live-action adaptation of the period known as the Dance of the Dragons.
TV SERIES・1 DAY AGO