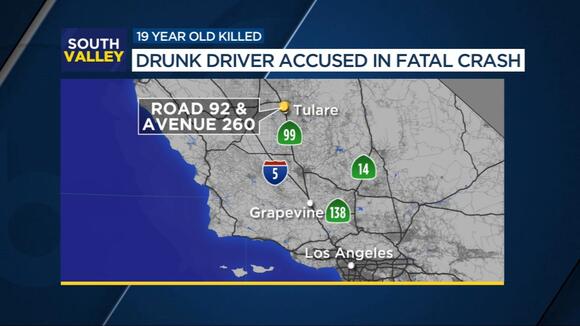 An intoxicated driver caused a deadly crash just outside Tulare that killed a teenager and left another with major injuries, the California Highway Patrol says. The crash happened on Road 92 and Avenue 260 just outside Tulare about 10:45 on Saturday night. Officers say the suspect, 21-year-old Jerry Diaz Avila from Tulare, was driving north on Road 92 with a 19-year-old woman from Hanford in the passenger seat when he crossed directly into oncoming traffic. Their vehicle crashed head-on with a pickup truck being driven by a 19-year-old man from Visalia. The victim in the pickup truck was thrown out from his vehicle and died on scene from his injuries. The 19-year-old passenger in Avila's vehicle has major injuries. CHP officers have not yet released details on her condition. The CHP says Diaz was found to be under the influence of alcohol during the crash. He has been booked in jail and is facing drunk driving and manslaughter charges. Authorities have not yet identified the victims.

My condolences to the family. This is all to familiar for me. There needs to be stricter laws on driving under the influence. Manslaughter let’s them off easy. Their selfish decision changed the lives of the families that are left behind forever. They say the pain gets better with time. The truth is you just learn to live with it.

Police say a Honda Civic was eastbound on Barstow when it veered to the right side of the street, over the sidewalk and struck a tree.
FRESNO, CA・4 HOURS AGO
ABC30 Central Valley

The Merced County Sheriff's Office is investigating after a man was killed at Hilmar restaurant on Sunday.
HILMAR, CA・3 HOURS AGO
ABC30 Central Valley

A man is dead and another is in critical condition following a shooting in central Fresno.
FRESNO, CA・15 HOURS AGO

TULARE COUNTY, Calif. (KFSN) -- Detectives are investigating a shooting in the South Valley. Tulare County sheriff's deputies responded to calls of a robbery along Highway 99 in Goshen around 5 on Sunday morning. When deputies arrived at the crime scene near Highway 99, they found a man who had...
TULARE COUNTY, CA・1 DAY AGO
ABC30 Central Valley

Man arrested for punching Visalia police officer in the face

When the Visalia police officer got out of his car, 32-year-old Rhys Enloe allegedly ran up and punched him in the face.
VISALIA, CA・1 DAY AGO
ABC30 Central Valley

Fresno police now say there could be some gang ties connected to the violence.
FRESNO, CA・1 DAY AGO
ABC30 Central Valley

Know the Road with the CHP: How close can I park to a driveway?

How close are you legally allowed to park to the opening of a driveway?
TRAFFIC・2 DAYS AGO

When officers arrived they found a man in his 30s lying on the sidewalk with several gunshot wounds.
FRESNO, CA・1 DAY AGO
ABC30 Central Valley

The Fresno County Sheriff's Office says the boy told other students he had a gun in his backpack and was planning to shoot a teacher.
KINGSBURG, CA・2 DAYS AGO
ABC30 Central Valley

A 22-year-old man is in critical condition after he was found shot in the head in southwest Fresno.
FRESNO, CA・1 DAY AGO

TULARE COUNTY, Calif. (KFSN) -- The Tulare County Sheriff's Office on Saturday issued fresh evacuation orders for some communities near the Windy Fire in Sequoia National Forest. The communities of Ponderosa and Quaking Aspen have been ordered to evacuate immediately. A temporary evacuation point has been set up at Porterville...
TULARE COUNTY, CA・21 HOURS AGO
ABC30 Central Valley

Police searching for suspect in series of northwest Fresno robberies

Police investigating shooting in northeast Fresno, nearby school on lockdown

Authorities say that shots were fired around 2 pm near Herndon and Bond. Shortly after, a shooting victim arrived at Saint Agnes Hospital.
FRESNO, CA・3 DAYS AGO
ABC30 Central Valley

Construction underway on stretch of Highway 41 in Madera County

Caltrans officials said crews will remove and replace pavement, seal cracks in the road and upgrade existing road signs along a 21-mile stretch of Highway 41.
1 HOUR AGO
ABC30 Central Valley

FRESNO, Calif. (KFSN) -- Joseph Shepherd was sentenced on Friday to 31 years to life for the murder of Andrew Alvarez. Back on July 13, a jury found Shepherd guilty of second-degree murder for stabbing Alvarez. The sentence comes more than 16 years after the crime and seven years after...
FRESNO, CA・2 DAYS AGO
ABC30 Central Valley

Police say 40-year-old Rocky Patrick Munoz was involved in the murder of 38-year-old Dominic Harris, who was found shot near West Hemlock and South Woodland in Visalia on September 7.
VISALIA, CA・4 DAYS AGO
ABC30 Central Valley