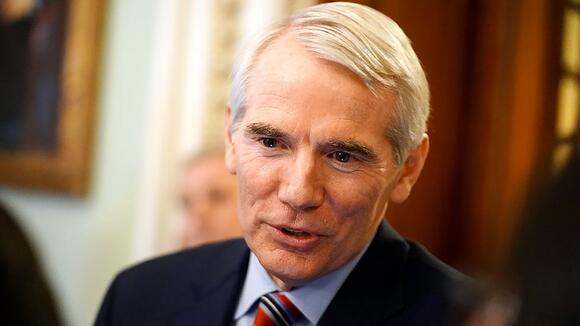 Republican Sen. Rob Portman (Ohio), the lead GOP negotiator on infrastructure, said Sunday that he is “not happy” about Speaker Nancy Pelosi ’s (D-Calif.) plan to delay a vote on the bipartisan infrastructure deal until a larger reconciliation package is passed.

“The infrastructure bill has nothing to do with the reckless tax-and-spend extravaganza that she's talking about. ... So, no, I’m not happy with what she said because it's inconsistent with the agreement that we have on a bipartisan basis,” Portman told host George Stephanopoulos on ABC’s “This Week.”

When pressed on if that means Congress may not end up passing an infrastructure package, Portman said, "Well, if she has her way, we could. I’m not sure what the future is on reconciliation."

"I know that the bipartisan infrastructure package is very popular among the American people and in the United States Congress because it makes sense. We need it badly," he added.

Portman then knocked Pelosi for potentially "blocking" the passage of the bipartisan deal.

“It's been totally bipartisan from the start. It's the way we ought to be doing things here in Washington to get stuff done, and I can’t believe the Speaker of the House would be blocking it,” he added.

Pelosi on Sunday doubled down on her decision to delay a vote on the bipartisan deal until the Senate passes a larger infrastructure package through reconciliation.

“I won’t put it on the floor until we have ... the rest of the initiative,” she told Stephanopoulos in a separate interview.

Portman on Sunday also said infrastructure negotiators are “about 90 percent of the way there” when asked if there is a deal.

“We’re going to legislate the language with colleagues and with staff, and I feel good about getting that done this week,” Portman added.

He said the final issue outstanding is mass transit before pinning the blame on Democrats.

“We’re not getting much response from the Democrats on it,” Portman said.

“That's the one issue that’s outstanding, frankly, at this point," he added. "My hope is that we'll see progress on that yet today.”

Meanwhile the Chinese develop the worlds fastest passenger train while our roads and bridges fail from decay! Our Congress is getting nothing done for our country because of political party animosity! Infrastructure is roads bridges railroads shipping airlines etc, NOT social programs!

Just fix the infrastructure nothing else. Roads bridges railways electrical gride Spend a trillion if that's what's needed. Then work on other projects that need to be addressed. President Eisenhower did that in the 50s.. times have changed and we need a complete overhaul of our infrastructure. But the frigging WOKE don't care about this country. Wake up America.. Not WOKE up..Wake up citizens.

WASHINGTON – A Republican senator has forced a delay of a key vote on Suffolk County District Attorney Rachael Rollins’s nomination to be the next US attorney for Massachusetts to give him time to lobby his colleagues to oppose her. The move by Senator Tom Cotton, confirmed by an aide,...
SUFFOLK COUNTY, MA・20 HOURS AGO
arcamax.com

Editorial: Politically bankrupt: Senate Republicans are happy for the US to default on its debt

Journey with us, if you will, all the way back to August 2019. In a budget deal passed by Congress and signed by President Donald Trump, Washington suspended the U.S. debt limit for two years — two years in which Republicans refrained from pitching a fit every time the U.S. needed to borrow more money.
CONGRESS & COURTS・17 HOURS AGO
kusi.com

(WASHINGTON) — Democratic House and Senate leaders on Thursday announced they and the White House have reached agreement on a “framework” that will pay for most, if not all, of the massive $3.5 trillion human infrastructure bill — a move meant to mitigate concerns from moderate and centrist Democrats opposed to the hefty price tag.
CONGRESS & COURTS・17 HOURS AGO

COLUMBUS (WCMH) –The newest Republican to enter the race to represent Ohio in the U.S. Senate is the only GOP candidate who is not trying to win the endorsement of former President Donald Trump. Ohio Senator Matt Dolan said the only endorsement he needs is that of Ohio voters. Hours...
COLUMBUS, OH・1 DAY AGO
Reuters

WASHINGTON (Reuters) - The two top Democrats in the U.S. Congress announced a revenue deal on Thursday that they said would pay for President Joe Biden’s social spending agenda, marking a major step forward in their effort to enact sweeping legislation. “The White House, the House and the Senate have...
CONGRESS & COURTS・6 HOURS AGO
New York Post

Manchin, Sinema and even the Squad might just stop the $3.5T monstrosity

Can Joe Manchin and Kyrsten Sinema save America from ruin? All of Washington is watching as Monday’s deadline approaches for a House showdown over the bipartisan infrastructure bill passed by the Senate. Moderate and progressive Democrats are each trying to call the other’s bluff. The question is whether one side blinks or both cut a deal. If neither happens, that will be good news for fiscal sanity and bad news for President Biden’s agenda.
CONGRESS & COURTS・21 HOURS AGO
The Independent

House SpeakerNancy Pelosi chided Republicans for not voting to raise the debt limit on Thursday, asking why Democrats always need to be more responsible.The House Speaker hosted Senate Majority Leader Chuck Schumer and Treasury Secretary Janet Yellen during her weekly press conference. On Tuesday, the House voted to extend the debt limit until December 2022 and keep the government open until 3 December of this year.“They voted to shut down government and not honour the full faith and credit of the United States of America,” Ms Pelosi said, noting that the bill included disaster relief for those affected by...
PRESIDENTIAL ELECTION・3 HOURS AGO

The House passed a bill Tuesday that would temporarily fund the government and suspend the debt limit. The legislation could fail in the Senate, as Minority Leader Mitch McConnell says Republicans will vote against raising the debt ceiling. The government would shut down on Oct. 1 and the U.S. would...
CONGRESS & COURTS・1 DAY AGO
FOXBusiness

There are just four days until Democrats' tentative deadline to vote on the bipartisan infrastructure bill in the House, and moderates and progressives are still in a standoff over what to send to President Biden's desk and when. Democratic leadership, along with rank-and-file members of both wings of the party,...
PRESIDENTIAL ELECTION・10 HOURS AGO
Washington Examiner

The GOP wants to force Democrats to raise the debt ceiling alone, but there's no guarantee Democrats can pull it off. The stakes are economic chaos.
CONGRESS & COURTS・1 HOUR AGO

Several said in interviews that they’ll do whatever it takes to keep the government open — which would almost certainly involve starting negotiations with resistant Republicans.
PRESIDENTIAL ELECTION・23 HOURS AGO
Markets Insider

Even former GOP treasury secretaries reportedly tried to get Mitch McConnell to help avoid a debt default. He refused.

Treasury Secs. Steve Mnuchin and Henry Paulson warned McConnell of the consequences of not raising the debt ceiling as the US approaches default.
CONGRESS & COURTS・1 DAY AGO
The Independent

With a personal push, President Joe Biden pressed fellow Democrats to hasten work on his big “build back better” agenda, telling them to come up with a final framework and their best topline budget figure as the party labors to bridge its divisions in Congress ahead of crucial voting deadlines.Biden and Democratic House and Senate lawmakers met for hours of back-to-back-to-back private White House sessions stretching into Wednesday evening, convened at a pivotal juncture for Biden's $3.5 trillion package as lawmakers struggle to draft details of the ambitious effort. With Republicans solidly opposed, Democratic leaders are counting on the...
PRESIDENTIAL ELECTION・17 HOURS AGO
erienewsnow.com

House and Senate Democratic leaders say they've reached a deal with the Biden administration on options for paying for the Democrats' massive plan to expand the social safety net. But it quickly became clear that the deal lacked many specifics, needed to be sold to Congress and required ample negotiating to get broad consensus within their party.
CONGRESS & COURTS・5 HOURS AGO

US President Joe Biden met Wednesday with the warring wings of his Democratic Party in an effort to save his troubled economic plans. The White House said in a statement Biden held three "productive and candid" meetings with two dozen members of Congress, as he dives in to try and settle an internal party squabble threatening to sink his ambitious social spending and infrastructure agenda. One meeting featured the two most powerful Democrats, House Speaker Nancy Pelosi and Senate Majority Leader Chuck Schumer. Both are close Biden allies but are struggling to get their ranks in line behind the economic plans. Biden then met with a group of moderate Democrats, including senators Joe Manchin and Kyrsten Sinema, who have got cold feet about the huge price tag.
PRESIDENTIAL ELECTION・20 HOURS AGO
New York Post

Eleven Democratic senators are backing House progressives in their push to pass a massive $3.5 trillion spending bill as part of President Biden’s Build Back Better agenda, as the US Chamber of Commerce calls the spending an “existential threat” to the US’ economic recovery. On Wednesday, the group of lawmakers...
CONGRESS & COURTS・2 HOURS AGO
WashingtonExaminer

Democrats and Republicans are in a standoff over raising the debt ceiling and passing a $3.5 trillion infrastructure bill, widening the path toward a government shutdown and an unprecedented default on the national debt.
CONGRESS & COURTS・5 HOURS AGO
MarketWatch

As Democratic-run Washington works on getting the bipartisan infrastructure bill enacted, here are visual breakdowns for the long-awaited measure's spending categories, as well as its funding sources.
ALHAMBRA, CA・2 DAYS AGO