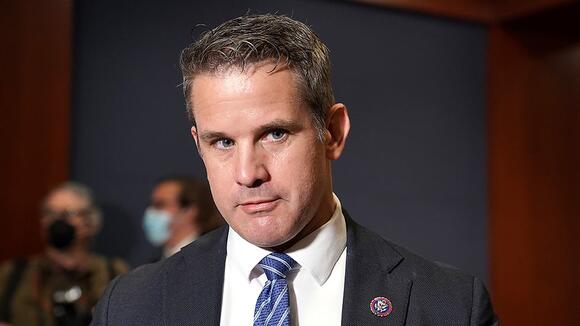 Speaker Nancy Pelosi (D-Calif.) on Sunday signaled that she plans to appoint GOP Rep Adam Kinzinger (Ill.) to the select committee investigating the Jan. 6 attack on the Capitol, saying “you could say that’s the direction I would be going.”

Pelosi told ABC’s “This Week” that she would not be making an announcement Sunday and that she needed to speak with Kinzinger, who has been outspoken in his criticism of former President Donald Trump .

But she also said “that would be my plan” when she was asked by host George Stephanopoulos about appointing more Republicans to the panel.

“Perhaps after I speak to Adam Kinzinger,” Pelosi said.

“I’m not about to announce it right this minute, but you could say that that is the direction that I would be going on,” Pelosi continued.

She said Kinzinger and other Republicans have “expressed an interest” to sit on the select committee.

Both Cheney and Kinzinger voted to impeach Trump for his role in inciting a mob that attacked the Capitol on Jan. 6 to stop the counting of Electoral College votes.

Drama relating to the Jan. 6 investigation unfolded last week after Pelosi rejected two of the Republican nominees to sit on the committee: Reps. Jim Jordan (Ohio) and Jim Banks (Ill.).

Pelosi defended her decision on Sunday, telling Stephanopoulos that Jordan and Banks “are people who would jeopardize the integrity of the investigation, and there’s no way I would tolerate their antics.”

House Minority Leader Kevin McCarthy (R-Calif.) responded to the move by yanking all five of his nominees from the committee.

House Speaker Nancy Pelosi pressured her caucus to keep insisting on a bipartisan vote to increase the debt ceiling as some high-ranking Democrats in the House start to entertain raising the limit without Republican support.
CONGRESS & COURTS・20 HOURS AGO
The Guardian

One of the seven Republican senators who voted to convict Donald Trump at his second impeachment trial warned on Sunday that the former president’s “bullying” of the party would lead to electoral defeat in next year’s midterms and beyond. Bill Cassidy of Louisiana was speaking days after the Ohio Republican...
NFL・1 DAY AGO
Daily Herald

Facts Matter: No one's cutting off Biden's mic, and a portion of a video attributed to Pelosi was faked

During a recent congressional hearing on the withdrawal from Afghanistan, Idaho Republican Sen. James Risch used his time for questioning to ask Secretary of State Antony Blinken about a conspiracy theory circulating through conservative media. "It's been widely reported that somebody has the ability to push the button and cut...
CONGRESS & COURTS・2 DAYS AGO
POLITICO

Inside Thompson and Cheney's Jan. 6 probe alliance — both genuine and strategic

In interviews with POLITICO, the Democrat and Republican leading the insurrection select committee revealed a surprisingly thriving partnership.
CONGRESS & COURTS・1 DAY AGO

Fewer than a dozen Republicans are expected to back the Senate-passed bill. But that number may go much higher in the coming days, depending on circumstances.
CONGRESS & COURTS・3 HOURS AGO
Axios

House Speaker Nancy Pelosi (D-Calif.) may need votes from an unlikely source — the Republican Party — if she hopes to pass the bipartisan infrastructure bill by next Monday, as she's promised Democratic centrists. Why it matters: With at least 20 progressives threatening to vote against the $1.2 trillion bipartisan...
CONGRESS & COURTS・11 HOURS AGO
Los Angeles Times

The House committee is playing for keeps against the GOP's falsehoods — that there was no insurrection, that the mob was peaceful and that the 2020 election was stolen.
LOS ANGELES, CA・1 DAY AGO
Newsweek

"The Republican Party will not get better unless you stand up," the congressman said in a message to fellow GOP lawmakers on Saturday.
PRESIDENTIAL ELECTION・2 DAYS AGO

House Speaker Nancy Pelosi was addressing the crisis of American democracy in the wake of the Capitol riot at a speech in London.
WORLD・3 DAYS AGO
MSNBC

Two words were so closely associated with Republican Rep. Anthony Gonzales that I started to think they were part of his name: "rising star." The Ohio congressman was a young former football star with an MBA from Stanford whose political career appeared to have limitless potential. That is, until January....
POTUS・3 DAYS AGO
Newsweek

Previously, the senator reportedly told Trump he had been "written off as dead" because of the U.S. Capitol riot.
POTUS・4 DAYS AGO

House Speaker Nancy Pelosi mocked the possibility of former President Donald Trump running again in 2024. The California Democrat made jabs at Trump during an event at Cambridge University on Thursday when talking about the Jan. 6 riot at the Capitol. "I reference him from time to time as 'What's-his-name,'"...
PRESIDENTIAL ELECTION・4 DAYS AGO
mediaite.com

Republican Congressman Anthony Gonzalez revealed to the New York Times’s Jonathan Martin that he will be retiring from Congress after this term, citing concerns over his and his family’s security from threats of violence from Trump loyalists. Martin appeared on CNN’s New Day and revealed that Reps. Cheney and Kinzinger could be next.
CONGRESS & COURTS・3 DAYS AGO
Newsweek

"It is time for the Republican Party to denounce militia-ism," the GOP lawmaker urged.
CONGRESS & COURTS・4 DAYS AGO
Newsweek

"You unelect these bastards, that's what you do. You don't give them another shot, another bite at the apple," Steele said
POTUS・4 DAYS AGO

So far, top Republicans are staying quiet about the Sept. 18 protest on the Hill in defense of some Capitol riot defendants.
U.S. POLITICS・6 DAYS AGO
New Jersey Globe

If you believe the latest Bob Woodward book, the United States has lost civilian control of its military — unless you count Nancy Pelosi, who seems to have been in control of everything since she became speaker in 2019 with the single-minded goal of bringing down Donald Trump. Everything has...
CONGRESS & COURTS・5 DAYS AGO
mediaite.com

Gaetz Takes a Shot at McCarthy Over Handling of Cheney and Kinzinger on ‘Stalinist’ 1/6 Committee, Says They ‘Are Not On Our Team Anymore’

Rep. Matt Gaetz criticized Minority Leader Kevin McCarthy for not removing Reps. Liz Cheney and Adam Kinzinger from their committee assignments after they agreed to serve on the select committee investigating the Capitol riot. That committee has asked telecommunications companies to preserve the phone records of certain Republican members of Congress.
CONGRESS & COURTS・6 DAYS AGO