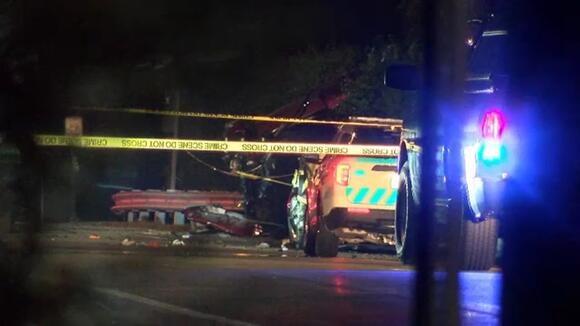 Five people were killed when two cars collided head-on in Suffolk County Saturday. Police said a Nissan Maxima was traveling westbound on Montauk Highway in Quogue around 11:19 p.m. when it veered into oncoming traffic and slammed into a Toyota Prius. The male driver of the Toyota, 32-year-old Farhan Zahid, and three male passengers were pronounced dead at the scene. The three male passengers were identified by police as Michael Farrell, 20, James Farrell, 25, and Ryan Kiess, 25. All three were from Manhasset, New York. One other passenger, 22-year-old Brianna Maglio, was injured and is listed in critical condition. The driver of the Nissan, 22-year-old Justin Mendez who was the only person in that vehicle, was pronounced dead at Southampton Hospital. Police said that excessive speed may have been a contributing factor. MORE NEWS: Suspected drunk driver charged in crash that killed mother, daughter

A man is facing manslaughter and driving while intoxicated charges following a crash that killed a mother and her young daughter in Queens Saturday.

It's true that so many fatal car, truck, etc accidents , are due to being impaired on Booze or Drugs........ The rest are probably due to Speeding, talking on cell phone, messed up roads and Other Bad drivers.

Has anyone noticed how unsafe the roads have become. Every other day in Suffolk people dieing in car accidents.

Pot, alcoholic, texting, talking on the phone, day dreaming, fast car, speeding,, and being in a foul mood which causes aggressive driving.

Hempstead police say they were called to South Franklin and Grove streets Monday at 4:50 p.m. to perform a welfare check on a woman who was slumped behind the steering wheel of a school bus.
NASSAU COUNTY, NY・1 DAY AGO
ABCNY

A bull that has been on the loose for more than two months after escaping from a slaughterhouse on Long Island has finally been captured, the Suffolk County SPCA said Thursday.
SUFFOLK COUNTY, NY・11 HOURS AGO
ABCNY

Teams are searching for a fifth day at a massive wilderness park to look for the boyfriend of Gabby Petito, the young woman who authorities say was killed while on a cross-country trip with him.
PUBLIC SAFETY・8 HOURS AGO

Police said about 200 people were at the barbecue in Claremont Park around 11:15 p.m. when a fight broke out among some of the attendees.
BRONX, NY・1 DAY AGO
ABCNY

The fire broke out on the sixth floor of the East 44th Street building just after 3:15 a.m.
ACCIDENTS・1 DAY AGO
ABCNY

Police are trying to identify a suspect in the shooting of an NYU student in Brooklyn.
BROOKLYN, NY・1 HOUR AGO
ABCNY

There were some frightening moments in Chinatown Thursday morning when a glass panel fell five stories and shattered on the ground below.
MANHATTAN, NY・13 HOURS AGO

Friends and community members are mourning the loss of a 78-year-old woman who was killed after a fire broke out at a small house in New Jersey on Tuesday.
THEATER & DANCE・2 DAYS AGO
ABCNY

Community mourning after man jumps from Yonkers building, lands on person below

A community in Westchester County is reeling after a distraught man took his own life by jumping off a building and landing on 61-year-old man, killing them both.
YONKERS, NY・2 DAYS AGO
ABCNY

Gabby Petito died by homicide, a coroner concluded while also confirming that the human remains found recently at a Wyoming national park were those of the 22-year-old woman. The manhunt continues for Brian Laundrie.
WYOMING STATE・1 DAY AGO
ABCNY

The 911 caller claimed he witnessed Laundrie hit Petito and chase her up and down a sidewalk in Utah.
MOAB, UT・3 DAYS AGO

Video shows a van pull up to the 18-year-old victim and a man pulls out a gun and points it at him.
QUEENS, NY・3 DAYS AGO
ABCNY

Dramatic video shows an explosion in the subway apparently caused by a bicycle being thrown on the tracks in Queens.
QUEENS, NY・2 DAYS AGO
ABCNY

A 78-year-old man collecting cans was assaulted and robbed on the Lower East Side, and authorities are hoping surveillance will lead to an arrest.
NEW YORK CITY, NY・3 DAYS AGO
ABCNY

A 67-year-old man beaten and robbed while walking home in New York City is speaking out about the frightening encounter.
NEW YORK CITY, NY・2 DAYS AGO
ABCNY

It happened Saturday at 9:18 p.m. inside of McLean Deli & Groceries on East 240th Street in Woodlawn Heights.
BRONX, NY・3 DAYS AGO
ABCNY

In this Eyewitness News exclusive interview, the 28-year-old victim says after the suspect shoved her, the suspect looked at the crowd and said "I have metal rods in my legs."
BROOKLYN, NY・2 DAYS AGO
ABCNY

At least a dozen FBI agents and police officers converged on the North Port, Florida, home Brian Laundrie shared with his parents. They left with a car and boxes of evidence, but where is he?
PUBLIC SAFETY・3 DAYS AGO