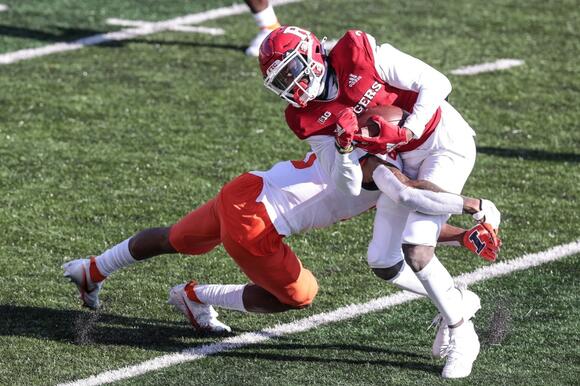 Rookie cornerback Nate Hobbs will be one of the many new faces joining the Las Vegas Raiders defense this season.

The 6-foot, 195-pound Kentucky native was signed by Las Vegas after being selected in the fifth round of the NFL Draft out of Illinois.

Hobbs had a less-than-ideal, injury-riddled senior season in which he started only five games after starting all 13 the season before. Yet, the cornerback still recorded 31 tackles. He also had a crucial interception against Rutgers in the final moments of the game that resulted in a game-winning field goal for the Fighting Illini.

Had it not been for injury, Hobbs probably would have gone earlier in the draft, especially when considering his junior year stats. Hobbs was selected All-Big Ten honorable mention. He also recorded a career-high 10 tackles against Wisconsin on Oct. 19, 2019.

Hobbs is used to excelling in a Cover 3 defense. This will likely play out in his favor under new Raiders defensive coordinator Gus Bradley. Bradley sticks to a Cover 3 scheme and is expected to implement it in Las Vegas.

Hobbs probably will have to work his way into a first-string role, but probably will serve at the outset in a reserve role in contributing to the defense.

Fortunately for Hobbs, his defensive experience and youth could be the key to his way in soon enough. Regardless, his presence on Coach Jon Gruden’s team should only prove to be beneficial.

Tell us what you think in the comment section below.

Want the latest breaking Las Vegas Raiders news delivered straight to you? CLICK THE FOLLOW button at the top of the page. Don't miss any of the latest up to the second updates for your Las Vegas Raiders when you follow on Twitter @HondoCarpenter, @HikaruKudo1 @BaydounDarin

We've gone over a number of players on the Las Vegas Raiders who are in a position to have bounce-back seasons in 2021. With the season now only a week away, it's time to look at Las Vegas Raiders who could potentially break out this year. When the Raiders drafted...
NFL・11 DAYS AGO
reviewjournal.com

The draft process that led Raiders to Nate Hobbs

It wasn’t as if the Raiders had a low grade on Nate Hobbs as they were stacking their 2021 draft board. But something wasn’t sitting well with a team scout after watching Hobbs work out at Illinois’ pro day last March. Nolan Nawrocki was at Illinois to evaluate Hobbs, a...
NFL・9 DAYS AGO
silverandblackpride.com

Jim Nagy has been a fan of Nate Hobbs for a quite a while and the longtime scout is thrilled to see the cornerback from Illinois enjoy the preseason success he has had for the Las Vegas Raiders. Simply put, the fifth-round pick has been the story of the preseason...
NFL・9 DAYS AGO
chatsports.com

HENDERSON, Nev. -- In his first real NFL action, Nate Hobbs' blindside sack of Geno Smith shook not only the Seattle Seahawks quarterback to his core, but woke up the entire Las Vegas Raiders sideline. A week later, Hobbs was simply a football player making a play, breaking off his...
NFL・9 DAYS AGO

Hobbs Is Latest Late Round Steal by Raiders

We’re just days away from the start of the 2021 NFL season but teams are still tweaking their rosters a but. For the Las Vegas Raiders, those tweaks have led to a surprise cut on Monday. According to NFL insider Tom Pelissero, the Raiders waiving second-year linebacker Tanner Muse. And...
NFL・11 DAYS AGO
TMZ.com

LSU football student staff member Kevione Faulk -- daughter of 3-time Super Bowl champion Kevin Faulk -- tragically passed away on Monday, the team announced. She was just 19 years old. The Tigers released a statement on Faulk's passing ... saying, "We are heartbroken with the passing of Kevione Faulk,...
NFL・3 DAYS AGO
SkySports

Brian Daboll will fill a head coaching vacancy in the NFL. Could be next year, could be the year after, could be any point in the next five years. When the time comes, it might/should/will be the reward for his role in nourishing and unlocking the talent of Josh Allen.
NFL・22 DAYS AGO

Moments ago, the Green Bay Packers made a notable cut involving one of their young wide receivers. It turns out the front office has waived Equanimeous St. Brown, per Ryan Wood of the Green Bay Press-Gazette. The Packers selected St. Brown in the sixth round of the 2018 NFL Draft....
NFL・17 DAYS AGO
The Spun

A notable wide receiver is officially on the open market this Tuesday. In a surprising turn of events, the Las Vegas Raiders have released John Brown. According to NFL Network insider Tom Pelissero, the Raiders actually released Brown because that was his request. It’s unclear what went on behind the scenes in Las Vegas.
NFL・17 DAYS AGO
SB Nation

It’s been almost two weeks since the Patriots cut Cam Newton, and now the QB has responded in one of the most frank, fascinating interviews pro football has ever seen. On Friday morning Newton released a 45 minute video titled “My Side Of The Story,” where he sat down with his father, Cecil Newton Sr. to discuss his process of getting cut.
NFL・7 DAYS AGO
The Spun

Head coach Nick Saban may not have been pleased with Alabama‘s season-opening win over Miami, but former Florida quarterback Tim Tebow sure was. Following the 44-13 win over the Hurricanes, Saban suggested his team didn’t play a full 60 minutes. Meanwhile, Tebow couldn’t stop gushing over the performance from quarterback Bryce Young.
ALABAMA STATE・6 DAYS AGO

Well the NFL season is officially upon us, because NFL “experts” are looking at double-digit NFL teams and ranking them ahead of the Seattle Seahawks. Seattle has notoriously and relentlessly fared badly in the garden variety power rankings throughout the years. This week is no exception. In fact, it seems like it’s getting worse.
NFL・8 DAYS AGO
ClutchPoints

The Tennessee Titans grabbed NFL headlines with their acquisition of superstar wide receiver Julio Jones. Even before the move, many pegged them as the favorites to repeat as division winners in the AFC South, given the Deshaun Watson fiasco ongoing with Houston Texans, and the big question mark surrounding how good Carson Wentz can be for the Indianapolis Colts.
NFL・6 DAYS AGO
The Spun

The Carolina Panthers agreed to a trade with the Las Vegas Raiders on Wednesday night that will send a veteran linebacker across the country just a few weeks before the start of the regular season. The Panthers announced that they sent linebacker Denzel Perryman and a 2022 seventh-round draft pick...
NFL・22 DAYS AGO
FOX Sports

Aaron Rodgers: 'They drafted my replacement so just let him play'

Aaron Rodgers' unhappiness in Green Bay was the major storyline throughout the NFL offseason. It started on the day of the NFL Draft when reports surfaced that Rodgers wished to be traded, kicking off a whirlwind of rumors and drama that continued throughout the summer. But Rodgers says he wouldn't...
NFL・5 DAYS AGO

Las Vegas Raiders head coach Jon Gruden has coached a plethora of talented players over the course of his career, but it appears the best player he has ever had the privilege of coaching is on his current roster. Following a thrilling win over the Baltimore Ravens on Monday night,...
NFL・3 DAYS AGO
ClutchPoints

Baltimore Ravens Lamar Jackson isn’t listening to any of the speculation that Jeremy Fowler of ESPN floated around. Fowler said that people around the league have told him: “This might be the year that everybody figures out Lamar Jackson.” The Ravens dynamic quarterback isn’t buying it. Via ESPN, Jackson kept...
NFL・24 DAYS AGO
The Spun

According to a report, USC has a “top choice” in mind to replace Clay Helton as head coach. He’s a man already familiar with Pac-12 territory. Per Scott Wolf of Inside USC, the Trojans’ No. 1 candidate is none other than Oregon head coach Mario Cristobal. Cristobal just scored the...
COLLEGE SPORTS・1 DAY AGO
NBC Sports

Where will Cam Newton play next? Here are five possible destinations

Bill Belichick stunned the football world on Tuesday when the New England Patriots released Cam Newton. Newton appeared to be ahead of rookie Mac Jones on the depth chart all summer after starting 15 games for the Patriots last year. In 2020, Newton had 20 total touchdowns (12 rushing, eight passing), 10 interceptions and 2,657 passing yards.
NFL・17 DAYS AGO