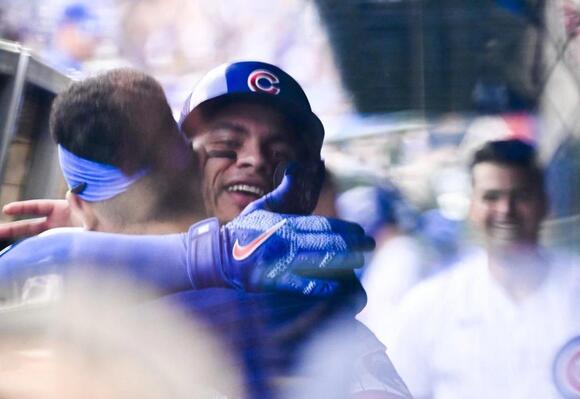 Daulton Varsho continued his assault on his father’s former team with a tiebreaking single as the visiting Arizona Diamondbacks scored three times in the seventh inning Saturday afternoon en route to a 7-3 victory over the Chicago Cubs.

The game was delayed 99 minutes in the middle of the ninth inning by lightning and heavy rain. Anthony Rizzo scored the Cubs’ final run on a wild pitch following the restart.

Varsho, the son of ex-Cubs outfielder Gary Varsho, homered at Wrigley Field for the second consecutive day and ran his string to three consecutive games with a long ball.

Diamondbacks right-hander Merrill Kelly (7-7) ran his unbeaten string to seven starts with six effective innings, allowing Arizona to draw even in the three-game series after taking an 8-3 loss 24 hours earlier.

Having rallied from a 2-0 deficit earlier, the Diamondbacks took command for good after reliever Andrew Chafin (0-2) walked Pavin Smith and Nick Ahmed to open the seventh.

Varsho followed with his go-ahead single to left, and pinch hitter Asdrubal Cabrera then laced a two-run double to right, giving Arizona a three-run lead and paving the way to a fifth win in the club’s past six games. 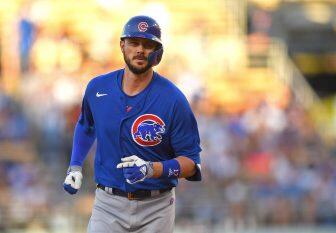 Cabrera had been activated off the injured list before the game. He missed the previous nine games due to a strained right hamstring.

He remained in the game at third base after his pinch-hitting assignment and added a second double in the ninth. Pinch hitter Andrew Young then beat the rain delay with a two-run homer, his sixth of the season, to complete the Arizona scoring.

Varsho’s homer, his fourth of the year, began Arizona’s rally in the fifth. The two-out, two-run shot off Cubs starter Alec Mills drew the visitors even at 2-2.

The 25-year-old finished with three RBIs, equaling the career high that he established with a double and a homer in the series opener. 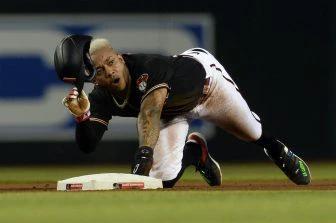 Mills was pulled after five innings, having allowed just the two runs and three hits. He walked two and struck out one.

Chicago built its early lead with single runs in the third and fourth. A double-play grounder by Javier Baez opened the scoring, before Willson Contreras smacked a homer, his 15th of the year, while leading off the fourth to make it 2-0.

Kelly benefitted from the seventh-inning uprising to win his fifth consecutive decision. He was charged with two runs on five hits, with one walk and six strikeouts.

Eduardo Escobar had two hits for the Diamondbacks, while Kris Bryant collected a single and a triple for Chicago.

Daulton Varsho had three hits, including a double and home run, and drove in four runs as the Arizona Diamondbacks snapped a six-game losing streak with a 7-3 victory against the host Seattle Mariners on Saturday night. Mitch Haniger and Jarred Kelenic went deep for the Mariners (77-65), who lost...
MLB・11 DAYS AGO
numberfire.com

Arizona Diamondbacks outfielder Daulton Varsho is sitting Friday in the team's game against the Seattle Mariners. Varsho is being replaced behind the plate by Carson Kelly against Mariners starter Marco Gonzales. In 231 plate appearances this season, Varsho has a .232 batting average with a .755 OPS, 9 home runs,...
MLB・12 DAYS AGO
MLB Game Highlights

Daulton Varsho finds the seats in right field for a two-run homer as Seth Beer comes around to score.
11 DAYS AGO

Houston Astros | D-backs vs. Astros Highlights - Kole Calhoun plated the go-ahead run and Daulton Varsho clubbed a two-run homer to give the D-backs a 6-4 win vs. Astros in extras

Kole Calhoun plated the go-ahead run and Daulton Varsho clubbed a two-run homer to give the D-backs a 6-4 win vs. Astros in extras.
4 DAYS AGO
Arizona Sports

HOUSTON (AP) — Kole Calhoun knocked in the go-ahead run with an RBI single and Daulton Varsho homered as the Arizona Diamondbacks scored three runs in the 10th inning for a 6-4 win over the Houston Astros on Saturday night. Calhoun hit a run-scoring single off Yimi García (3-9) through...
MLB・4 DAYS AGO
Houston Chronicle

Shohei Ohtani is rewriting history books and redefining traditional limits placed on ballplayers. He does it all with a reverence and respect that’s won the admiration of Astros manager Dusty Baker, who acknowledged it’s “tough not to like” the 27-year-old Japanese superstar. “He’s tough not to like because anybody that...
MLB・12 DAYS AGO
Golf Digest

We’ve seen some amusing bust-ups and dust-ups relating to the MLB’s new foreign substance checks this season. Max Scherzer and Sergio Romo threatened to get naked. Lance Lynn threw his belt at an umpire. Nothing on the level of George Brett popping his top after getting tossed for pine tar, but still pretty fun. None of those, uh, let’s call them enthusiastic exchanges, however, can compare to the tantrum former Cubs lefty Mike Montgomery threw in the KBO on Friday, bull rushing an umpire and beaning him with a rosin bag before ripping his shirt off and storming from the premises. Behold the insanity ...
MLB・13 DAYS AGO

We’re coming up on a month now since we sat back in horror and watched Jed Hoyer and the Chicago Cubs front office embark on a foundation-shaking fire sale at the trade deadline. It’s been a depressing time to say the least, as we’ve watched the Cubs win just four...
MLB・29 DAYS AGO
USA TODAY Sports Media Group

Henry Ramos has spent 11 seasons at various levels of minor-league baseball without a big-league appearance. Well, that’s about to change, and he’s going to have a lot to talk about with his new teammates in Arizona. While playing in Friday’s game for the Diamondbacks’ Triple-A affiliate Reno Aces, Ramos...
MLB・18 DAYS AGO
NBC Chicago

Playoff-minded Schwarber: Non-tender ‘better’ for career originally appeared on NBC Sports Chicago. Kyle Schwarber, the first homegrown core player kicked to the curb by the Cubs during their nine-month roster purge, watched Kris Bryant’s Wrigley Field homecoming Friday from the other side of town. Among other things, he wondered whether...
MLB・12 DAYS AGO
FanSided

As of this morning, the Seattle Mariners find themselves heading home after a six-game road trip that saw them sweep the Arizona Diamondbacks before dropping a tough series to the Houston Astros. Winning 4 of 6 in this stretch was probably the realistic expectation for this group, but losing the...
MLB・14 DAYS AGO

Detroit Tigers star Miguel Cabrera revealed that he aims to play at least two more seasons before he officially calls it a career. Cabrera is at the point of his career where it seems as if in every month, he manages to set a historic milestone. Just earlier this week, Cabrera became the 28th player in MLB history to record 500 career home runs.
MLB・28 DAYS AGO
NJ.com

The Los Angeles Dodgers claimed right-handers Jake Jewell and Ryan Meisinger off waivers from the Chicago Cubs on Tuesday. Both
MLB・23 DAYS AGO
detroitsportsnation.com

Tigers slugger Miguel Cabrera is Detroit’s nominee for the annual Roberto Clemente Award, which is given to the player who “best represents the game of baseball through extraordinary character, community involvement, philanthropy and positive contributions, both on and off the field.”. And to that end, Cabrera will be wearing a...
MLB・8 DAYS AGO

Chicago Cubs: 3 trades to help the outfield this offseason

(Photo by Steph Chambers/Getty Images) What a turn of events in the last week for the Chicago Cubs. Though the starting rotation is still pretty much in shambles, it goes to show that this team isn’t as bad as it seems when you get a decent start or two from a starting pitcher.
MLB・13 DAYS AGO
USA TODAY

After Rays OF Kevin Kiermaier swiped a scouting report card from a Blue Jays catcher on Monday, both benches emptied when he was hit by a pitch in Wednesday's game.
MLB・22 HOURS AGO
chatsports.com

Edmundo Sosa, Harrison Bader and Dylan Carlson each drove in two runs and the St. Louis Cardinals edged the visiting
MLB・3 DAYS AGO