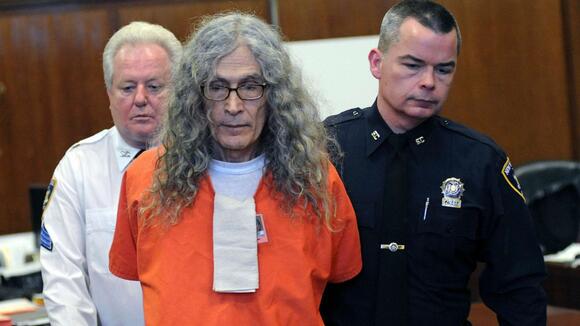 Alcala, 77, died of natural causes at 1:43 a.m. Saturday at a hospital in the community near Corcoran State Prison, the California Department of Corrections and Rehabilitation said in a statement.

Alcala was known as "The Dating Game" killer for his appearance as a winning contestant on the television game show in 1978.

MORE: A close call: How serial killer Rodney Alcala appeared on 'The Dating Game' and won

He was previously sentenced to death twice for the murder of Samsoe -- in 1980 and then again in 1986 -- though those sentences were later overturned in appeals and he was granted new trials.

Alcala also pleaded guilty to the murders of two other women in New York -- Cornelia Crilley in 1971 and Ellen Jane Hover in 1977. He was sentenced to 25 years to life in 2013.

He has been linked to or suspected of murders in other states. In 2016, he was charged by Wyoming prosecutors with the murder of 28-year-old Christine Ruth Thornton, who disappeared in 1978 when she was six months pregnant and whose body was found four years later, though authorities ultimately decided not to extradite him to Wyoming for trial due to his failing health.

Alcala's execution in California had been postponed indefinitely due to a moratorium on the death penalty instituted by the state in 2019.

A successful photographer, Alcala often would lure women and girls by approaching them on the street and offering to take their picture before attacking them, investigators said. While investigating the murder of Samsoe in 1979, investigators found hundreds of photographs in a Seattle storage locker belonging to Alcala of unidentified women, girls and boys, as well as jewelry believed to be trophies of some of his victims.

In 2010, the Huntington Beach Police Department released the photos taken by Alcala confiscated decades earlier to determine whether they may have been victimized by him. Prior to his death, he had not disclosed whether there were other victims.

Glad he is gone. The things he put so many people through. The hurt he caused so many families.

An alleged San Francisco Bay Area serial killer was convicted Tuesday of the murder of the daughter of former Stanford University athletic director Chuck Taylor nearly 50 years ago. A San Mateo County jury took about an hour to convict John Getreu of strangling Janet Taylor, 21, who was last...
CALIFORNIA STATE・8 DAYS AGO
People

A new Oxygen special produced by child safety activist Elizabeth Smart tells the story of Kara Robinson, a 15-year-old girl who was abducted and assaulted before escaping her captor in 2002. In 2002, Kara Robinson was abducted from her friend's front yard in Columbia, S.C., forced into a dark storage...
COLUMBIA, SC・9 DAYS AGO
reviewjournal.com

A man who has spent nearly 40 years on Nevada’s death row is ineligible for capital punishment and should be granted a new penalty hearing, the state’s high court has ruled. Samuel Howard, 73, was given the death penalty in 1983 after he was convicted of robbing Las Vegas dentist...
LAS VEGAS, NV・6 DAYS AGO
insideedition.com

A serial killer who reportedly researched serial killers, “Hannibal Lector” and ‘Silence of the Lambs” confessed to the brutal murders of two Pennsylvania women on Wednesday and was handed two life sentences without the possibility of parole, officials said. Harold David Haulman III pleaded guilty to two counts of first-degree...
PENNSYLVANIA STATE・13 DAYS AGO

Evil Lives Here is investigating the multiple crimes of serial rapist and killer Robert Brashers who destroyed the lives of many women and children across at least four states. Brashers first became known to the police when he was convicted in 1985 of beating and assaulting a woman in Port...
PORT SAINT LUCIE, FL・11 DAYS AGO
ABC30 Central Valley

A convicted killer got the longest possible punishment after he had no apologies Monday for the family of the young man he baited into a fight and stabbed to death.
FRESNO, CA・9 DAYS AGO
Rivy L

Dennis Rader's MugshotKansas Department of Corrections. Imagine you are getting your home security system installed by your friendly neighborhood Scout Leader. It’s unlikely that you would suspect him of also being a serial killer, unless, of course, you watch as many true crime shows as I do. The advantages that Dennis Lynn Rader’s professions gave him were immeasurable. He could case the joint in plain sight! Ironically enough, he would install systems for persons who were hoping to protect their homes and families from the BTK killer.
8 DAYS AGO
calmsage.com

Inside The Mind of A Serial Killer: What Turns A Man Into A Monster

A serial killer might not be a new word for many of us! From reading about them in newspapers to watching them in movies, people have either been fascinated or have felt deeply terrified by them. But have you ever wondered why serial killers kill? Why do some people become serial killers and most don’t? Most importantly, did you ever get a thought of what drives serial killers? These questions are not just a matter of concern for criminologists but for us too. After all, both nature (genetics) and nurture (environmental factors). While we have no control over the genetic factors, we certainly can help make the environmental factors better! So let us get into the mind of a serial killer and understand what “creates” a serial killer!
PUBLIC SAFETY・13 DAYS AGO

The former U.S. Border Patrol agent accused of killing four women and kidnapping another could have a jury selection process as soon as March. Juan David Ortiz appeared in the 406th District Court for a status hearing on Thursday morning. As per the defense counsel, they were satisfied with the discovery that was provided by the state, according to the hearing notes.
PUBLIC SAFETY・14 DAYS AGO
Newsweek

Who Is Serial Killer Guy Georges, Where Is He Now and Is He Still Alive?

Guy Georges is the focus of Netflix's new true-crime documentary "The Women and the Murderer."
ENTERTAINMENT・14 DAYS AGO
MassLive.com

SPRINGFIELD — Jury empanelment will begin Oct. 6 in the triple murder, kidnapping and rape trial of Stewart Weldon. Jurors will start being selected on that day while testimony is set to begin on Oct. 12 in Hampden Superior Court — or some alternative venue if environmental concerns at the Roderick Ireland Courthouse remain unresolved for some.
HAMPDEN COUNTY, MA・13 DAYS AGO
Norwich Bulletin

Edward A. Surratt left a trail of bodies starting in 1977 that dominated newspapers’ front pages and terrified a generation while his spurts of savagery astonished even veteran investigators. Earlier this year, the aging murderer confessed six slayings to Pennsylvania State Police, and the troopers are angling for more. Buoyed...
PENNSYLVANIA STATE・6 DAYS AGO
Pittsburgh Post-Gazette

Investigators over the years tried — and failed — to break Edward A. Surratt, whom they all described as a difficult suspect who despised law enforcement officers. It wasn’t until 2007, when a former homicide sergeant from Florida forged a bizarre relationship with the prolific murderer, that critical details finally emerged.
PUBLIC SAFETY・6 DAYS AGO
The Associated Press

Sheriff IDs woman found in 1977 as victim of serial killer

PASCAGOULA, Miss. (AP) — A Mississippi sheriff’s department said Tuesday that it has identified the skeletal remains of a woman found nearly 44 years ago, and investigators believe she was a victim of the now-deceased Samuel Little, the most prolific serial killer in U.S. history. Hunters found the woman’s remains...
JACKSON COUNTY, MS・2 DAYS AGO
mocomotive.com

On Friday, September 17, 2021, Jody James Malone Jr., 34, pled guilty to Continuous Sexual Abuse of a Child. The Honorable Judge Lisa Michalk in the 221st District Court sentenced Malone in accordance with his plea to 50 years in prison. This plea agreement resolved 11 child sexual abuse cases and spared numerous child sexual abuse victims from being required to testify in trial. Additionally, this particular plea will ensure that Malone spends the next 50 years in prison with no chance at parole. Malone will not be eligible for release from prison until 2070 when he is 84 years old.
PUBLIC SAFETY・3 DAYS AGO

Clara Birdlong said she was leaving Mississippi with a man to go to Florida in 1977, a friend told investigators with the Jackson County Sheriff’s Department last August. Her family never heard from her again. Despite a composite sketch of what she might have looked like, she remained a "Jane...
MISSISSIPPI STATE・2 DAYS AGO
Biloxi Sun Herald

After 40 years, skeletal remains known only as “Escatawpa Jane Doe” have been identified through DNA. The woman’s name was Clara Birdlong, and Jackson County Sheriff’s investigators believe she was murdered by serial killer Samuel Little, a news release from the Jackson County Sheriff’s Office says. Little confessed to more than 90 murders throughout the southeast before he died at age 80 in a California prison cell.
JACKSON COUNTY, MS・2 DAYS AGO
theadvocate.com

About a month after he was sentenced to life without parole for the killings of two Black men, convicted Baton Rouge serial killer Kenneth Gleason killed himself shortly after his transfer to the Louisiana State Penitentiary at Angola, prison officials say. A Department of Corrections spokesman said Gleason "committed suicide...
LOUISIANA STATE・1 DAY AGO
Midland Reporter-Telegram

Newly ID'd Jane Doe Could Be a Victim of U.S.' 'Most Prolific Serial Killer'

After 44 years, a woman known only as Escatawpa Jane Doe has been identified as Clara Birdlong of Leflore County, Mississippi, the Jackson County Sheriff’s Department announced Tuesday. Investigators believe she was murdered by Samuel Little, the so-called “most prolific serial killer” in U.S. history, who died in 2020. Two...
PUBLIC SAFETY・1 DAY AGO