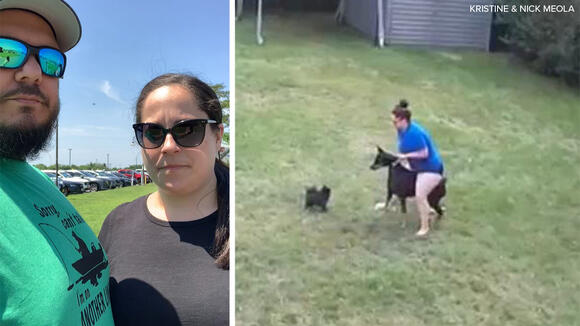 A woman from Long Island is sharing her story after fighting off a Doberman who tried to attack her little dog. Surveillance video captured the frightening incident outside Kristine Meola's home on Middle Island. Meola says she went outside with her Pomeranian named Ziggy to turn off her pool on Friday, and that's when she heard her next-door neighbor's Doberman at the fence. TOP NEWS | Runaway bull shuts down Long Island highway

Kristin Thorne reports from Moriches where a bull is on the loose.

She said it was a little aggressive and then she saw the Doberman come from underneath the fence and charge at Ziggy. Meola says she didn't know the other dog's intentions, so she rushed in and pulled the Doberman back by the collar.

That's when Meola screamed for her husband Nick, who came out and took their dog Ziggy into the house to safety. ALSO READ | Tens of thousands of New Yorkers are moving to Florida during COVID pandemic

Kristin Thorne has more on the New Yorkers who are making the move to Florida.

Kristine Meola says she then brought the Doberman back to her neighbor's home. ---------- * More Long Island news * Send us a news tip * Download the abc7NY app for breaking news alerts * Follow us on YouTube

Investigators have ramped up their search for a missing New Jersey woman who was last seen three months ago in the Yucca Valley area of San Bernardino County.
PUBLIC SAFETY・7 HOURS AGO
ABCNY

BLUE POINT, Long Island (WABC) -- Armed with lighters and freighted with sorrow, on Friday, residents of Blue Point resolved to find light in the dark tragedy. They lit candles for Gabby Petito in a memorial that stretched as far as the eye could see - to show her family they aren't alone.
BLUE POINT, NY・22 HOURS AGO
ABCNY

The deaths of two newborns discovered outside a Bronx apartment building last year has been ruled a homicide, but what led up to their tragic deaths remains a mystery.
BRONX, NY・3 HOURS AGO
ABCNY

The Bronx Homicide Squad held the funeral for the newborns at the East End Funeral Home on Gunhill Road Saturday morning.
BRONX, NY・3 HOURS AGO

A bull that has been on the loose for more than two months after escaping from a slaughterhouse on Long Island has finally been captured, the Suffolk County SPCA said Thursday.
SUFFOLK COUNTY, NY・2 DAYS AGO
ABCNY

Responding officers found the victim with a deep cut to the back of his head.
NEWARK, NJ・1 HOUR AGO
ABCNY

The attacker followed the 76-year-old man into the vestibule of the building and then put him into a chokehold.
PUBLIC SAFETY・1 DAY AGO
ABCNY

NORTH PORT, Florida (WABC) -- Search teams fanned out for a fourth day at a massive wilderness park to look for the boyfriend of Gabby Petito, the young woman who authorities say was killed while on a cross-country trip with him. Petito, 22, was reported missing Sept. 11 by her...
FLORIDA STATE・2 DAYS AGO
ABCNY

Police are trying to identify a suspect in the shooting of an NYU student in Brooklyn.
BROOKLYN, NY・1 DAY AGO
ABCNY

The Gabby Petito case has made national headlines, but there are also people who disappear in the Tri-State Area that don't garner the same attention.
NEW YORK CITY, NY・1 DAY AGO
ABCNY

Friends and community members are mourning the loss of a 78-year-old woman who was killed after a fire broke out at a small house in New Jersey on Tuesday.
THEATER & DANCE・3 DAYS AGO

NORTH PORT, Florida (WABC) -- A woman named Nina Celie Angelo took to her Instagram saying she witnessed Gabby Petito and Brian Laundrie get into an explosive argument at a Jackson, Wyoming restaurant. The Blue-Collar Restaurant Group confirmed to ABC News on Wednesday that they believe Petito and Laundrie were...
WYOMING STATE・2 DAYS AGO
ABCNY

Divers have been called to join in the search for 23-year-old Brian Laundrie. The search is centered around North Port, Florida, where investigators said Laundrie returned to his home on Sept. 1 without Petito but driving her 2012 Ford Transit.
FLORIDA STATE・3 DAYS AGO
ABCNY

Shea revealed Thursday that just 62% of police officers are vaccinated, one of the lowest among city agencies.
NEW YORK CITY, NY・1 DAY AGO
ABCNY

Gabby Petito died by homicide, a coroner concluded while also confirming that the human remains found recently at a Wyoming national park were those of the 22-year-old woman. The manhunt continues for Brian Laundrie.
WYOMING STATE・3 DAYS AGO

In the statement reported on August 12, the witness claims that the couple appeared to have some sort of dispute and recalls Petito punching Laundrie in the arm and face.
UTAH STATE・3 DAYS AGO
ABCNY

Police said about 200 people were at the barbecue in Claremont Park around 11:15 p.m. when a fight broke out among some of the attendees.
BRONX, NY・3 DAYS AGO
ABCNY

In this Eyewitness News exclusive interview, the 28-year-old victim says after the suspect shoved her, the suspect looked at the crowd and said "I have metal rods in my legs."
BROOKLYN, NY・4 DAYS AGO
ABCNY

Dramatic video shows an explosion in the subway apparently caused by a bicycle being thrown on the tracks in Queens.
QUEENS, NY・4 DAYS AGO