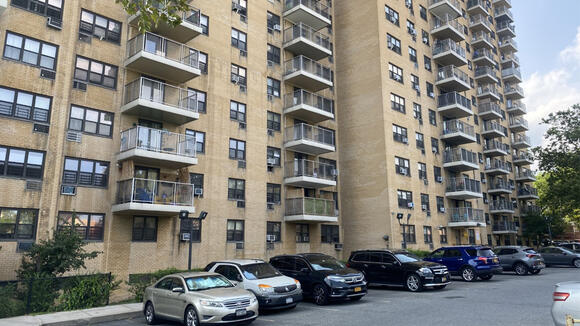 Candace McCowan reports from Flushing on the crash that critically injured a 4-year-old boy.

Police say a 4-year-old boy appeared to have fallen from a 10th floor balcony at the apartment complex. He was taken to Jacobi Medical Center in critical condition. It's unclear who else was at home when this happened. Some neighbors who were home at the time, heard the commotion. "I heard somebody say somebody fell. I brought my kid inside. I heard the ambulance and police cars come in," apartment building resident Mike said. ---------- * More Bronx news * Send us a news tip * Download the abc7NY app for breaking news alerts * Follow us on YouTube

The deaths of two newborns discovered outside a Bronx apartment building last year has been ruled a homicide, but what led up to their tragic deaths remains a mystery.
BRONX, NY・2 HOURS AGO
ABCNY

Responding officers found the victim with a deep cut to the back of his head.
NEWARK, NJ・16 HOURS AGO
ABCNY

Police are trying to identify a suspect in the shooting of an NYU student in Brooklyn.
BROOKLYN, NY・1 DAY AGO
ABCNY

Police said about 200 people were at the barbecue in Claremont Park around 11:15 p.m. when a fight broke out among some of the attendees.
BRONX, NY・3 DAYS AGO

Investigators have ramped up their search for a missing New Jersey woman who was last seen three months ago in the Yucca Valley area of San Bernardino County.
PUBLIC SAFETY・5 HOURS AGO
ABCNY

The Gabby Petito case has made national headlines, but there are also people who disappear in the Tri-State Area that don't garner the same attention.
NEW YORK CITY, NY・23 HOURS AGO
ABCNY

A 67-year-old man beaten and robbed while walking home in New York City is speaking out about the frightening encounter.
NEW YORK CITY, NY・4 DAYS AGO
ABCNY

In this Eyewitness News exclusive interview, the 28-year-old victim says after the suspect shoved her, the suspect looked at the crowd and said "I have metal rods in my legs."
BROOKLYN, NY・3 DAYS AGO

BLUE POINT, Long Island (WABC) -- Armed with lighters and freighted with sorrow, on Friday, residents of Blue Point resolved to find light in the dark tragedy. They lit candles for Gabby Petito in a memorial that stretched as far as the eye could see - to show her family they aren't alone.
BLUE POINT, NY・21 HOURS AGO
ABCNY

Shea revealed Thursday that just 62% of police officers are vaccinated, one of the lowest among city agencies.
NEW YORK CITY, NY・1 DAY AGO
ABCNY

An NYU student is recovering after being shot by a stray bullet on campus in Brooklyn Tuesday.
BROOKLYN, NY・3 DAYS AGO
ABCNY

The fire broke out on the sixth floor of the East 44th Street building just after 3:15 a.m.
ACCIDENTS・3 DAYS AGO
ABCNY

Hempstead police say they were called to South Franklin and Grove streets Monday at 4:50 p.m. to perform a welfare check on a woman who was slumped behind the steering wheel of a school bus.
NASSAU COUNTY, NY・3 DAYS AGO
ABCNY

Community mourning after man jumps from Yonkers building, lands on person below

A community in Westchester County is reeling after a distraught man took his own life by jumping off a building and landing on 61-year-old man, killing them both.
YONKERS, NY・3 DAYS AGO
ABCNY

There were some frightening moments in Chinatown Thursday morning when a glass panel fell five stories and shattered on the ground below.
MANHATTAN, NY・2 DAYS AGO
ABCNY

Dramatic video shows an explosion in the subway apparently caused by a bicycle being thrown on the tracks in Queens.
QUEENS, NY・4 DAYS AGO
ABCNY

In the statement reported on August 12, the witness claims that the couple appeared to have some sort of dispute and recalls Petito punching Laundrie in the arm and face.
UTAH STATE・3 DAYS AGO
ABCNY

WHITE PLAINS, Westchester County (WABC) -- A reputed gang member apologized to the family of 13-year-old Shamoya McKenzie before he was sentenced to 31 years in federal prison for gunning down the promising high school basketball star in a crime that shocked Mount Vernon. David Hardy had faced life in...
MOUNT VERNON, NY・4 DAYS AGO