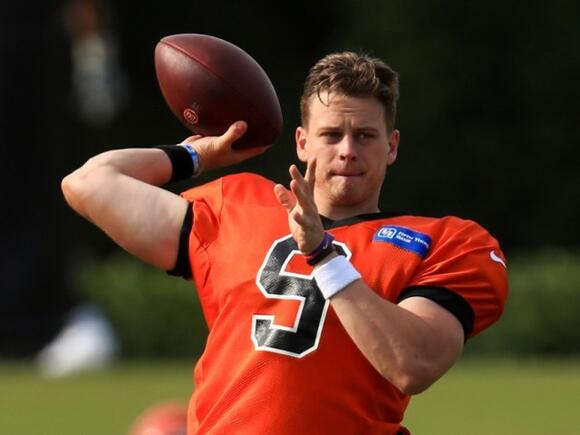 Chase, the star LSU receiver, former Burrow teammate and fifth overall draft pick, is one among a crowd of new faces in Bengals camp.

Riley Reiff, a free agent signee at tackle, will join some now-healthy players on what should be an improved offensive line.

Chicago Bears quarterback Andy Dalton did not return after suffering a knee injury in Sunday's game against the Cincinnati Bengals. Mike Florio of Pro Football Talk reported Sunday that the team doesn't believe it's a torn ACL and that the quarterback will get an MRI. NFL Network's Ian Rapoport reported...
NFL・9 DAYS AGO
USA Today

Cincinnati Bengals head coach Zac Taylor provided a pair of interesting injury updates the Monday after his team’s season-opening win over the Minnesota Vikings. Taylor told the media that No. 1 cornerback Trae Waynes probably won’t suit up in the team’s Week 2 game against the Chicago Bears. The bigger...
NFL・14 DAYS AGO
Sportsnaut

Are the Cleveland Browns pretenders or contenders? Now that their 2021 schedule is out, let's go through each game and see how they're likely to fare.
NFL・2 DAYS AGO
Yardbarker

Bengals quarterback Joe Burrow had an impressive showing in his season debut and first game back from knee reconstruction surgery. He completed 20-of-27 passes for 261 yards and two touchdowns. Burrow also found C.J. Uzomah for a 32 yard gain on 4th-and-inches to put Evan McPherson in position to kick the game winning field goal.
NFL・14 DAYS AGO

Film Review: How Joe Burrow and the Bengals Beat the Vikings in Week 1

The Bengals won their season opener for the first time since 2018 on Sunday when they beat the Vikings 27-24 in overtime. This is also the first overtime win for Cincinnati since 2015. They achieved this victory with an efficient passing game, a strong rushing attack, and a dominant interior pass rush. Let's watch film of these areas and see exactly how the Bengals won these three phases.
NFL・13 DAYS AGO
chatsports.com

Joe Burrow, Cincinnati Bengals (Photo by Andy Lyons/Getty Images) Joe Burrow made his return after a season-ending injury last year, and here are three key observations for the Cincinnati Bengals star quarterback. The Bengals got the win on Sunday against the Minnesota Vikings. As exciting as starting the season 1-0...
NFL・14 DAYS AGO
Cincinnati Herald

Last season when Joe Burrow sat on the ground rolling around in pain in the nations capital against the Washington Redskins, it wasn’t good. You could see the hopes of Bengal fans just deflate like a tire being punctured with a nail. It wasn’t like Cincinnati was going to contend for a Super Bowl or anything last season. But excitement and hope were brought back for the most hyped Bengal quarterback since Carson Palmer in 2003.
NFL・12 DAYS AGO
WKRC

Bengals Burrow said knee sore after opener: 'But I feel better than I have all camp'

CINCINNATI (WKRC) - Bengals quarterback Joe Burrow held a press conference on Wednesday to review his performance from this past Sunday's 27-24 overtime win over the Minnesota Vikings, preview this Sunday's game at the Chicago Bears and dealing with a road crowd after not dealing with one last season, how his body feels after getting hit for the first time in 10 months and more and here is the transcript:
NFL・13 DAYS AGO

With the Bears facing the Bengals' Joe Burrow, the topic of starting Justin Fields rages on

LAKE FOREST, Ill. – When the Chicago Bears host the Cincinnati Bengals on Sunday (1 p.m. ET, Fox), the spotlight will be on two young quarterbacks -- and two different approaches. Cincinnati’s Joe Burrow and Chicago’s Justin Fields both experienced top-end success in college: Burrow at LSU, where he won...
NFL・10 DAYS AGO
ClutchPoints

It has been a low-scoring affair between the Chicago Bears and Cincinnati Bengals at Soldier Field, and Roquan Smith just made the play of the game to date with huge interception of Joe Burrow. Smith returned the pick 53 yards for a touchdown to give the Bears a 17-3 lead.
NFL・9 DAYS AGO
Bengals.com

Media Roundtable: Bengals Resolve To Not Let The Bears Get Burrow

Bengals quarterback Joe Burrow, who has a winning record at home, seeks his first NFL road victory as the Bengals try replicate their postseason past in Sunday's matchup (1 p.m.-Cincinnati's Channel 19) at Soldier Field against the Bears. The Bengals followed up their first Opening Day victory under head coach...
NFL・9 DAYS AGO
KESQ

CHICAGO (AP) — Coming off one of his best games as a pro and facing a defense that struggled in a season-opening loss, Joe Burrow looked as if he might be in for another big outing. Instead, he threw three straight interceptions during a key stretch as the Cincinnati Bengals lost to the Chicago Bears 20-17. The 2019 Heisman Trophy winner never had a game like this as a pro or in college. He was not picked off more than once in his first 11 NFL games, and his high at Ohio State and LSU was two. Burrow was intercepted three times in the game. And it will be up to him to regroup from this.
NFL・9 DAYS AGO

The Cincinnati Bengals and Chicago Bears have announced their inactive players lists. Here are the players both teams will be without today:. The five Bengals who were inactive last week are also inactive today. Waynes (hamstring) is the only one dealing with a known injury. Fourth-round draft picks Shelvin and Smith seem to be on the outside looking in until injuries change the equation.
NFL・9 DAYS AGO
USA Today

Bengals coaches respond to critiques from Chase, Burrow and fans

After a week of upsets, the Week 3 schedule features just one game between teams with 2-0 records. It's early, but a possible NFC championship preview between the Buccaneers and Rams is the highlight of the schedule; a chance for Los Angeles to show it's for real with new quarterback Matthew Stafford. Should Tom Brady and Tampa Bay be underdogs in that one?
NFL・7 DAYS AGO
Chicago Tribune

Chicago Bears QB rewind: It is Justin Fields’ show now. The challenge will be winning through the inevitable rookie growing pains.

There’s no turning back now. (Unless there eventually is.) Justin Fields is the Week 3 starting quarterback for the Chicago Bears. (We presume. Probably.) Matt Nagy wouldn’t say any of that directly Monday morning, a day after the Bears slipped past the Cincinnati Bengals 20-17 at Soldier Field. But that’s the likely direction this is headed. For this week at least. Andy Dalton suffered a left ...
NFL・7 DAYS AGO
chatsports.com

Since Ben Roethlisberger joined the Pittsburgh Steelers as their first-round draft pick in 2004, the Cincinnati Bengals haven’t had much success against the black and yellow, only winning eight games vs. Pittsburgh when Big Ben has started. One of those eight wins came last year when Joe Burrow wasn’t the...
NFL・5 DAYS AGO
Santa Maria Times

PITTSBURGH (AP) — It's not enough to talk about changing the culture, something Zac Taylor started doing the moment he took over as Cincinnati Bengals head coach more than two years ago. At some point, the platitudes need to turn into something far more tangible. Something like Sunday's 24-10 win...
NFL・2 DAYS AGO
247Sports

With a pair of Burrow to Chase TD's, Bengals move to 2-1

In his rookie season a year ago, Cincinnati Bengals quarterback Joe Burrow started in 10 games before suffering a season-ending knee injury. And in all 10 games, Burrow threw 30 or more passes. There was even a 61-attempt day in week two of a 35-30 loss to the Cleveland Browns.
NFL・1 DAY AGO