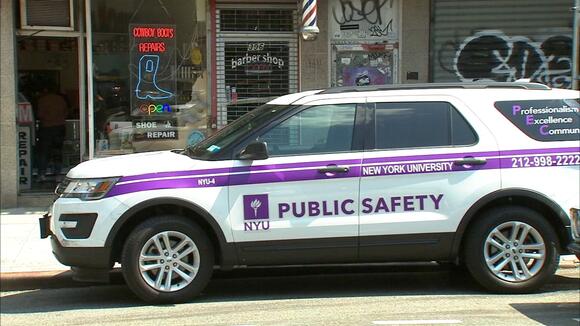 An NYU security supervisor has been hospitalized after he was stabbed multiple times by an employee, according to police. Officials say around 12:55 a.m. Saturday, a New York University security guard stabbed his supervisor multiple times. They say the incident happened at NYU dorm located at 400 Broome St. An NYU spokesman said the residence hall was not occupied by students. ALSO READ | Investigation underway after 3 found dead inside Long Island home

Authorities say one man and two women were found shot inside. A baby was found inside the home unharmed.

According to police, the victim and suspect were involved in a verbal dispute before the attack. The 45-year-old victim was stabbed in the neck, stomach and back. NYU spokesman John Beckman released a statement on the incident: "The University is shocked by this unprecedented incident and deeply concerned for the welfare of the injured Public Safety sergeant. NYU is a safe campus, our Public Safety officers do an exemplary job safeguarding our community, and this kind of act is both unheard of and utterly out of character with the role our Public Safety Officers play on campus." He's in stable condition at Bellevue Hospital. NYU officials were told while the victim's injuries are serious, they are not life-threatening. MORE NEWS: Seagull hits teen in face while on Jersey Shore ride

Georgia and Kiley who live near Weatherly, Pennsylvania got quite the surprise visitor while on a ride at Morey's Piers in Wildwood, New Jersey.

It's unknown what the verbal dispute was about. Police are looking for the suspect. "The assailant fled the scene before the arrival of NYC emergency personnel. An alert has been issued on campus banning him from all facilities, and he has been immediately suspended pending termination. The University is cooperating with law enforcement efforts to apprehend the assailant as quickly as possible and to investigate the circumstances of the stabbing," Beckman said. ---------- * Get Eyewitness News Delivered * More Manhattan news * Send us a news tip * Download the abc7NY app for breaking news alerts * Follow us on YouTube

Police are trying to identify a suspect in the shooting of an NYU student in Brooklyn.
BROOKLYN, NY・19 HOURS AGO
ABCNY

Shea revealed Thursday that just 62% of police officers are vaccinated, one of the lowest among city agencies.
NEW YORK CITY, NY・3 HOURS AGO
ABCNY

The attacker followed the 76-year-old man into the vestibule of the building and then put him into a chokehold.
PUBLIC SAFETY・13 HOURS AGO
ABCNY

The Gabby Petito case has made national headlines, but there are also people who disappear in the Tri-State Area that don't garner the same attention.
NEW YORK CITY, NY・2 HOURS AGO

Responding officers found the victim with a deep cut to the back of his head.
KEARNY, NJ・3 HOURS AGO
ABCNY

An NYU student is recovering after being shot by a stray bullet on campus in Brooklyn Tuesday.
BROOKLYN, NY・2 DAYS AGO
ABCNY

Residents across Bayport-Blue Point will be holding a vigil for Gabby Petito Friday evening, with funeral services now scheduled for Sunday.
PUBLIC SAFETY・34 MINUTES AGO

Why some Newark city workers are protesting COVID vaccine mandates

NEW JERSEY (WABC) -- The battle over vaccine mandates is raging in Newark as firefighters and police unions join forces against the mayor's push to get city workers vaccinated against COVID-19. "We're not anti-vax. We're not pro-vax. We are right in the middle. We should have a choice for that," Charlie West, Newark Firefighters Union president, said.
NEWARK, NJ・12 HOURS AGO
ABCNY

A 67-year-old man beaten and robbed while walking home in New York City is speaking out about the frightening encounter.
NEW YORK CITY, NY・3 DAYS AGO
ABCNY

Hempstead police say they were called to South Franklin and Grove streets Monday at 4:50 p.m. to perform a welfare check on a woman who was slumped behind the steering wheel of a school bus.
NASSAU COUNTY, NY・2 DAYS AGO

In the statement reported on August 12, the witness claims that the couple appeared to have some sort of dispute and recalls Petito punching Laundrie in the arm and face.
UTAH STATE・2 DAYS AGO
ABCNY

NORTH PORT, Florida (WABC) -- A woman named Nina Celie Angelo took to her Instagram saying she witnessed Gabby Petito and Brian Laundrie get into an explosive argument at a Jackson, Wyoming restaurant. The Blue-Collar Restaurant Group confirmed to ABC News on Wednesday that they believe Petito and Laundrie were...
WYOMING STATE・1 DAY AGO
ABCNY

Police said about 200 people were at the barbecue in Claremont Park around 11:15 p.m. when a fight broke out among some of the attendees.
BRONX, NY・2 DAYS AGO
ABCNY

Friends and community members are mourning the loss of a 78-year-old woman who was killed after a fire broke out at a small house in New Jersey on Tuesday.
THEATER & DANCE・2 DAYS AGO
ABCNY

Remains of Korean War veteran, identified over 70 years later, return to NYC to be laid to rest

In this Eyewitness News exclusive interview, the 28-year-old victim says after the suspect shoved her, the suspect looked at the crowd and said "I have metal rods in my legs."
BROOKLYN, NY・3 DAYS AGO
ABCNY

Officials are planning on a congestion pricing amount somewhere between $9 and $23, as the public weighed in on the plan at a virtual MTA meeting.
NEW YORK CITY, NY・1 DAY AGO
ABCNY

At least a dozen FBI agents and police officers converged on the North Port, Florida, home Brian Laundrie shared with his parents. They left with a car and boxes of evidence, but where is he?
PUBLIC SAFETY・3 DAYS AGO