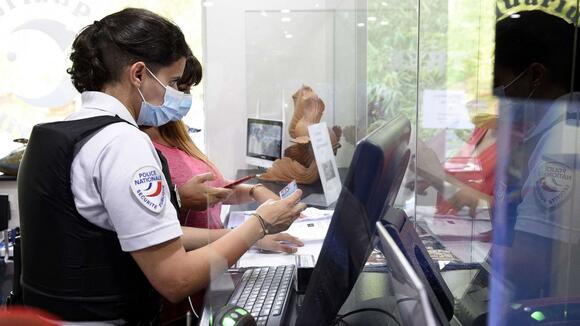 The mayor, who had previously said vaccine passports could be an important tool if balanced with privacy concerns, encouraged businesses "to move immediately to some form of mandate," adding that he would "seriously consider" a mandatory COVID pass for most social activities.

De Blasio compared New York to France , which announced this month that so-called "health passes" would be required for events or places that include 50 or more people, starting July 21, and for restaurants, cafes and stores starting in August . Patrons also can show a proof of a negative COVID-19 test taken in the previous 48 hours to gain entry.

"We have to look at making it more appealing to get vaccinated, because there are only things you can do when you're vaccinated," de Blasio said during an interview with WNYC Friday.

So far in France, the newly announced health passes appear to have spurred an uptick in both vaccinations and anti-vaccine demonstrations. One day after President Emmanuel Macron's televised July 12 address announcing the system, more than 1 million French people made vaccine appointments, with the majority of those being made by people younger than 35, according to The Associated Press .

Health workers in France, where at least 111,778 people have died from COVID-19, according to data from Johns Hopkins University , will be required to get vaccinated by Sept. 15, according to Macron.

At the same time, thousands of people in France took to the streets over the weekend to protest the health passes on the grounds that the rule was an overreach of Macron's power and an infringement of personal freedom, adding to longstanding tension. Even prior to the pandemic, the country had a strong thread of vaccine skepticism running through it.

Researchers on vaccine confidence surveyed more than 65,000 people across 67 countries in 2015 on their attitudes about vaccines . Based on those results, researchers deemed France, where 41% of respondents said they disagreed that vaccines were safe, the world's most vaccine-hesitant country. By comparison, the global average was 13%.

MORE: Conservatives distort Biden's pledge to 'knock on doors' to get people vaccinated

Some experts, however, have pushed back on France's reputation as an anti-vaccine nation. "There’s a very big difference between what the French say and what they do," Laurent-Henri Vignaud, a science historian and coauthor of the book "Antivax," told the Guardian in January . "And polls whose methodology and questions can seem abstract do not reflect what happens when people know where they will have the vaccine, what it does, the how, when and why."

Some neighboring European countries seem similarly willing to take a hard line on compulsory vaccination. Italy announced that it would introduce its own mandatory health pass system starting Aug. 6 .

Sept. 17 (UPI) — Thousands of healthcare workers across France have been suspended for failing to receive the COVID-19 vaccine, officials said Thursday. All French health workers face a deadline next month to be inoculated, unless they show proof of a qualifying exemption or recovery from COVID-19. French Health Minister...
WORLD・15 HOURS AGO
Daily News

Federal regulators haven’t authorized booster shots of the coronavirus vaccine yet — but Mayor de Blasio is already laying the groundwork for administering them. Hizzoner rolled out a booster shot plan Thursday that involves offering the additional doses at all vaccination sites in the city and extending opening hours at some of them to ensure access. The timeline remains hazy for when the ...
NEW YORK CITY, NY・1 DAY AGO
CBS New York

NEW YORK (CBSNewYork) — Former Gov. Andrew Cuomo will be able to keep the $5.1 million he made from his memoir on the COVID-19 pandemic. The state’s ethics agency made the decision Tuesday. TIMELINE: New York Gov. Andrew Cuomo Resigns In Wake Of Sexual Harassment, Nursing Home Scandals Among the six members who voted in Cuomo’s favor is a former Suffolk County district administrative judge, who Gov. Kathy Hochul chose for the panel.
NEW YORK CITY, NY・2 DAYS AGO
NY1

New York Gov. Kathy Hochul on Wednesday said health care workers threatening to quit over the COVID-19 vaccine mandate will not stop the state from moving forward with it. “We've been alerted that there's a hospital in Lewis County that may not be able to deliver babies,” Hochul said. “I checked. Every baby that is supposed to be delivered in Lewis County has been properly delivered…I'm not going to let this be a problem for the state of New York. I will ensure that we have the resources. And people are required to have temporary staffing plans, anyhow. Hospitals are required to have a game plan.”
NEW YORK CITY, NY・2 DAYS AGO

World leaders will have to be vaccinated against the coronavirus to speak at the U.N. General Assembly's big meeting next week, the assembly leader and New York City officials have said, prompting swift objections from at least one nation. With the diplomatic world's premier event being held in person for the first time during the pandemic, city International Affairs commissioner Penny Abeywardena told the assembly in a letter last week that officials consider the hall a “convention center” subject to the city's vaccination requirement for such facilities. “We are proud to join in the ongoing efforts to keep all...
PUBLIC HEALTH・2 DAYS AGO
AFP

All leaders and diplomats attending the United Nations General Assembly in New York next week will have to provide proof of vaccination, the city government said Wednesday, sparking anger from Russia. The high-level week of the 76th session of the General Assembly starts on Tuesday and finishes the following Monday.
NEW YORK CITY, NY・2 DAYS AGO
WashingtonExaminer

New York City began enforcing its Covid-19 vaccine passport program, known as "Key to NYC," for most indoor activities Monday as part of the city's broad reopening. Since August 17, the city has required that people age 12 and older show proof they have had at least one Covid-19 vaccine dose for indoor dining, indoor fitness activities and indoor entertainment, including movie theaters, concert venues, museums and sports arenas. Enforcement of those rules began on Monday, the city said.
NEW YORK CITY, NY・4 DAYS AGO

NEW YORK - "Right after it went on sale all of a sudden there was news of the Delta variant and the masks are back on, a lot of questions," said Bill Zafiros, owner of Marquee Concerts. The now-empty theater at Palladium Times Square will finally see music lovers back...
NEW YORK CITY, NY・4 DAYS AGO
WEKU

NEW YORK — School started Monday for about a million New York City public school students in the nation's largest experiment of in-person learning during the coronavirus pandemic. The first day of school coincided with several milestones in the city's pandemic recovery that hinge on vaccine mandates. Nearly all of...
NEW YORK CITY, NY・4 DAYS AGO
cbslocal.com

Indoor dining, entertainment and fitness establishments must check proof of vaccination or they could be fined. Businesses that don’t comply will face a warning, then fines starting at $1,000. CBS2's Christina Fan reports.
NEW YORK CITY, NY・4 DAYS AGO
MarketWatch

Reaction among restaurant owners has been mixed, especially from those who have seen their business plummet over the past 18 months.
NEW YORK CITY, NY・8 DAYS AGO

Workers at city-contracted childcare centers and after-school programs in the five boroughs have until Sept. 27 to receive at least one dose of a COVID-19 vaccine, Mayor Bill de Blasio announced Thursday. Employees at pre-k and 3k early learning, Cornerstone, and Beacon programs will need to provide documentation of a...
NEW YORK CITY, NY・8 DAYS AGO
CBS New York

Fear of the coronavirus is putting a damper on the holiday weekend, as airlines report a big drop in passengers compared to 2019. While air travel is down, travel by car is on par with the norm. 43 million people are expected to head to classic vacation destinations like Orlando, Florida, and Ocean City, Maryland. New York City is also on the list of most popular destinations, because it has one of the highest vaccination rates in the country, and vaccines are required for most indoor activities.
OCEAN CITY, MD・14 DAYS AGO
Washington Post

PARIS ― France recalled its ambassadors to the United States and Australia for consultations Friday, underscoring simmering French anger over a secretly negotiated submarine technology deal between the United States, Australia and Britain. In a statement, French Foreign Minister Jean-Yves Le Drian said the move came “at the request of...
U.S. POLITICS・15 HOURS AGO

France recalls ambassadors to US, Australia over sub deal

France said late Friday it was immediately recalling its ambassadors to the U.S. and Australia after Australia scrapped a big French conventional submarine purchase in favor of nuclear subs built with U.S. technology.It was the first time ever France has recalled its ambassador to the U.S., according to the French foreign ministry.Foreign Minister Jean-Yves Le Drian said in a written statement that the French decision, on request from President Emmanuel Macron “is justified by the exceptional seriousness of the announcements” made by Australia and the United States.He said Wednesday's announcement of Australia's submarine deal with the U.S. is...
WORLD・7 HOURS AGO
WashingtonExaminer

A group of Texas tourists attacked a New York City hostess on Thursday after she asked them to present proof of their vaccination status, authorities said.
NEW YORK CITY, NY・11 HOURS AGO
The Atlantic

Stop Calling It a ‘Pandemic of the Unvaccinated’

“Your refusal has cost all of us,” President Joe Biden said to unvaccinated people last week, as he announced a new COVID-vaccine mandate for all workers at private companies with more than 100 employees. The vaccinated, he said, are angry and frustrated with the nearly 80 million people who still haven’t received a vaccine, and their patience “is wearing thin.”
PUBLIC HEALTH・1 DAY AGO
The Independent

French President Emmanuel Macron will meet with German Chancellor Angela Merkel in Paris later Thursday to discuss international crises and European issues, days before elections that will determine who succeeds her after 16 years in office. Macron’s office said topics will include the diplomatic and humanitarian crisis in Afghanistan, the situation in Mali and European Union affairs. Macron and Merkel will make a joint statement before their one-to-one meeting, that will be followed by a working dinner at the presidential palace, the Elysee said.The meeting comes after French authorities announced overnight the death of the leader of the Islamic...
POLITICS・1 DAY AGO