OU to the SEC: Oklahoma's Gamble Will Pay Off on the Recruiting Trail 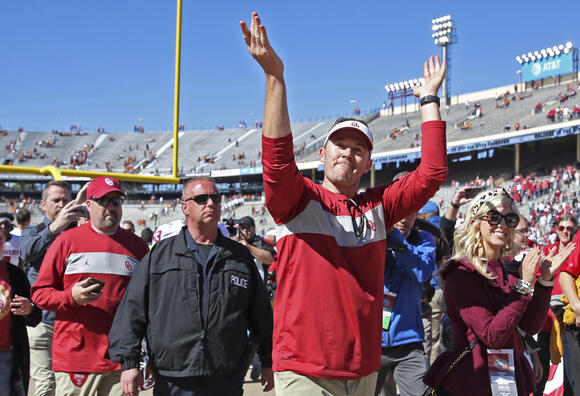 The landscape of college football is ever changing.

Texas A&M took advantage of this when the Aggies moved to the SEC in the last round of conference realignment.

Along with their newly minted SEC status came recruiting perks, as the Aggies turned themselves into a perennial recruiting power.

Now, the Oklahoma Sooners are positioning themselves for a similar renaissance.

In their final decade in the Big 12, Texas A&M’s recruiting class was ranked at 20.4 in the country by 247 Sports. In the 10 years since joining the SEC? They’ve ranked at 9.7 on average.

And the reasons for their massive jump aren’t too hard to piece together.

“It’s the competitiveness (in the SEC), and that’s really where it always has been,” Sports Illustrated All-American recruiting director John Garcia Jr. told SI Sooners. “It has vaulted to the best of the best in every single measure. Whether you go recruiting rankings, whether you go winning on Saturdays, which is still important… whether you go college football playoff titles, whether you go to the all important NFL … the SEC has been at the forefront of the discussion."

As just about everything in college football seems to change at an all-time pace, Garcia said the message from recruits has remained the same — they want to know how they can get to the NFL.

“The NFL has become number one on sort of the average recruit’s pecking order of priority,” Garcia said. “That’s what we hear more than everything else. More than family, feel, fit, NIL stuff, and that’ll be part of it too. But what we still hear the most is about Sundays and any NFL Draft will reinforce that SEC notion.”

That’s been an uphill battle the Sooners have had to fight for a decade now in every major recruiting battle. The notion that the Big 12 is an inferior brand of football has continually hurt OU, especially on the defensive side of the ball.

That’s about to change.

“Now, you’re not an outlier,” Garcia said. “Now you won’t be in that outlying list and now that no longer becomes a varying point in that decision-making process. A lot of kids look at that conference and say ‘I just want to play in that conference.’ Particularly, again, in Florida, Georgia and Alabama.”

Oklahoma will no longer have to fight that battle with Texas A&M for the top talent in the Lone Star State, and they might be able to further their foothold in the traditional bedrock of the SEC, throughout the south in Mississippi, Alabama, Georgia and Florida.

“I mean if you’re an offensive recruit and you’re not looking at Oklahoma, you’re kind of missing the boat here. But now in the argument of why shouldn’t I go there, the conference would become a part of that conversation,” Garcia said. “For programs on the cusp like Oklahoma looking to get over that championship hump, something like that can absolutely be the difference.”

The timeline is all over the place. The Grant of Rights expires in 2025, but there has been speculation that OU and Texas could be taking the field in the SEC as early as 2023. If that’s the case, Garcia said there will likely be no delay in seeing that bump with recruits.

“It’s instant,” he said. “If you think about recruiting, the bulk of programs are beginning to wrap up this class of 2022 so they’re sort of turning the page (to 2023).

“That sell would translate immediately to your graphics department, your marketing department, the whole shebang on social media would flip from one day to the next.”

Not only does the move to the SEC make all the sense in the world financially, the recruiting bump could be the final piece in the puzzle to putting the Sooners truly back amongst the elite of the elite in college football.

Head coach Nick Saban may not have been pleased with Alabama‘s season-opening win over Miami, but former Florida quarterback Tim Tebow sure was. Following the 44-13 win over the Hurricanes, Saban suggested his team didn’t play a full 60 minutes. Meanwhile, Tebow couldn’t stop gushing over the performance from quarterback Bryce Young.
ALABAMA STATE・5 DAYS AGO
The Spun

Nick Saban didn’t mince words when discussing one of his players during a post-scrimmage press conference on Saturday. Tight end Jahleel Billingsley began fall camp high on the depth chart, but saw a sizable slide after he missed time because of COVID-19 protocols. Saban isn’t happy with him. The Alabama...
COLLEGE SPORTS・26 DAYS AGO
TMZ.com

LSU football student staff member Kevione Faulk -- daughter of 3-time Super Bowl champion Kevin Faulk -- tragically passed away on Monday, the team announced. She was just 19 years old. The Tigers released a statement on Faulk's passing ... saying, "We are heartbroken with the passing of Kevione Faulk,...
NFL・2 DAYS AGO
saturdaytradition.com

In the wake of Wednesday’s report from The Action Network’s Brett McMurphy, which states Nebraska is under NCAA investigation for “improper use of analysts and consultants during practices and games,” questions have been flying regarding the status of head coach Scott Frost, who many considered to be on shaky ground to begin with.
NEBRASKA STATE・29 DAYS AGO

When it comes to Florida Gators football, Steve Spurrier knows a thing or two. After winning the 1966 Heisman Trophy as quarterback for the Gators, he would go on to become their head coach between 1990 and 2001, winning six SEC championships and one national championship there. While he would coach South Carolina for a decade as well, Spurrier remains synonymous with UF and is now an ambassador for the athletic department.
ALABAMA STATE・1 DAY AGO
USA TODAY

It never seemed like it would actually happen, but the USC football program has finally let go of head coach Clay Helton. It has been speculated about almost since the day that Helton was hired because it did not seem like USC went out and got the best coach that they could and settled yet again for another assistant.
COLLEGE SPORTS・3 DAYS AGO
The Spun

According to a report, USC has a “top choice” in mind to replace Clay Helton as head coach. He’s a man already familiar with Pac-12 territory. Per Scott Wolf of Inside USC, the Trojans’ No. 1 candidate is none other than Oregon head coach Mario Cristobal. Cristobal just scored the...
COLLEGE SPORTS・12 HOURS AGO

Former 49ers defensive player Parys Haralson, who spent his first seven NFL seasons with the franchise, died on Monday. He was 37. Haralson was a popular player in the locker room and with the fan base during his time with the 49ers. He was known for having close friendships with his teammates and lending support to those who needed it.
NFL・3 DAYS AGO
247Sports

Texas got its not-so warm welcome to the SEC Saturday night, travelling to Fayetteville for its week two matchup against the Arkansas Razorbacks. A six-point favorite, the Longhorns limped away with a 40-21 loss against their former rival. It won’t be too long before that game matters for conference standings....
ARKANSAS STATE・4 DAYS AGO
KXAN

What Texas coach Steve Sarkisian said after loss to Arkansas

FAYETTEVILLE, Ark. (KXAN) — The Texas Longhorns are leaving Fayetteville with their first loss of the season and some serious questions. Steve Sarkisian and the Longhorns were overwhelmed in front of a sellout Arkansas crowd Saturday night, losing 40-21 win. The Texas offense was harassed and the offensive line struggled to protect Hudson Card or open running room for Bijan Robinson.
ARKANSAS STATE・5 DAYS AGO
KARK

Sam Pittman Feels Georgia Southern Will Challenge the Hogs, Gets Starting QB Back This Week

FAYETTEVILLE — If there was ever a perfect spot for a trap game on Arkansas’ schedule it would be this week after the big Texas win and week before SEC opener against Texas A&M. Sam Pittman talked about his team avoiding a letdown this week against the 1-1 Eagles. “Well,...
FAYETTEVILLE, AR・2 DAYS AGO

Arkansas has been hit with a $100,000 fine from the SEC for fans storming the field after the Razorbacks took down No. 15-ranked Texas in Fayetteville. Considering everything the Razorback football program has been through over the last few years, it’s no surprise to see Hogs fans had one common reaction to the news out of the SEC office: worth it.
3 DAYS AGO
oklahoman.com

OU revives its storied rivalry with Nebraska at 11 a.m. Saturday in Norman. The Sooners (2-0) are rolling after a 76-0 win over Western Carolina in Week 2, while the Cornhuskers (2-1) are hitting their stride following a 28-3 win over Buffalo. Here’s a look at the matchup:. How to...
NEBRASKA STATE・4 DAYS AGO
Awful Announcing

High school football games are happening all across the country but a recent game between two Arkansas high schools is drawing scrutiny and outrage following comments about a student made by a commentator. This past weekend, Maumelle and Vilonia high schools were playing one another when Maumelle senior Nico Davillier,...
ARKANSAS STATE・2 DAYS AGO
saturdaydownsouth.com

Sam Pittman and the Arkansas Razorbacks improved to 2-0 in dramatic fashion on Saturday night, trouncing Texas 40-21 in Fayetteville. It was a tone-setting win for Pittman in Year 2, and after the game, it was all smiles in the locker room. As you can see below, Pittman gave a...
ARKANSAS STATE・5 DAYS AGO
The Spun

Oklahoma legend Barry Switzer is pretty active on Twitter for his age, but fans are a bit confused by his latest tweet. Switzer, 83, is fairly active on Twitter. He has over 100,000 followers and likes to talk mostly about football. On Thursday morning, Switzer took to Twitter and posted...
OKLAHOMA STATE・18 HOURS AGO
The Spun

Just over 24 hours ago, one of the most attractive jobs in college football opened when USC announced it parted ways with head coach Clay Helton. Every time a job like USC opens, big-name coaches have their names tossed in the ring as a potential successor. Whether there’s an actual connection or just an agent doing his best for his client, plenty of names have already been tossed around.
NFL・2 DAYS AGO
College Football News

USC fired Clay Helton two games into the 2021 season. Who are 5 possible candidates to replace him?. Clay Helton was fired by USC. Now it’s time to shoot for the stars. There’s no excuse whatsoever for USC to be anything but in the College Football Playoff chase every single season.
NFL・3 DAYS AGO
AllSooners

In the spring game, he was excellent. In the season opener, he was efficient. And in a 76-0 domination of Western Carolina on Saturday, Oklahoma quarterback Caleb Williams showed why he’s Lincoln Riley’s next great quarterback. Williams, the No. 1 high school player in the 2021 class per Sports Illustrated...
OKLAHOMA STATE・3 DAYS AGO