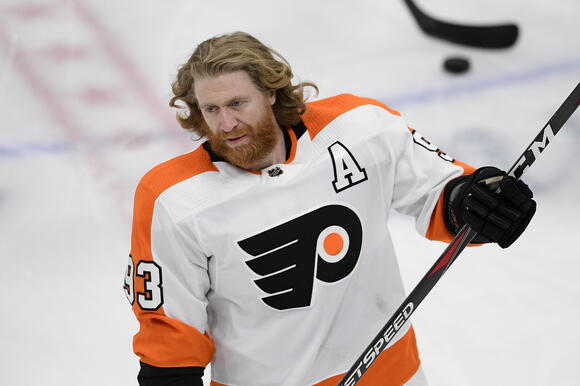 A familiar bearded face is going back to Columbus, with the Blue Jackets' longest tenured player heading to Philadelphia.

The Flyers sent Jakub Voracek to the Blue Jackets for Atkinson on Saturday, the first major trade on the second day of the NHL draft. The moves are expected to keep on coming during a busy offseason.

Voracek, who turns 32 in August, returns to the team that drafted him in 2007 after a much-needed split with the Flyers, with whom he spent the past 10 seasons and put up 604 points in 727 regular-season games.

Atkinson leaves the only NHL organization he has ever been with after scoring 213 goals in 627 games with the Blue Jackets. Columbus has traded Atkinson, Seth Jones, David Savard and former captain Nick Foligno over the past four months.

“This is a significant trade for our club and we are very excited to welcome Jake Voracek back to the Blue Jackets family.," Columbus general manager Jarmo Kekalainen said. “He is a powerful, dynamic offensive player that will be a significant contributor to our club. Adding a player like that comes at a cost, and I want to thank Cam Atkinson for his many contributions to the Blue Jackets and Columbus community over the past 10 years.”

It’s Philadelphia’s second major trade in two days after acquiring defenseman Rasmus Ristolainen from Buffalo for the No. 14 pick this year and a 2023 second-rounder. After taking on Ristolainen's big contract, GM Chuck Fletcher saved more than $2 million in cap space by swapping Voracek for Atkinson.

The Colorado Avalanche began the day by signing top defenseman Cale Makar to a $54 million, six-year contract. Makar will count $9 million against the salary cap through the 2026-27 season.

His deal comes on the heels of Chicago acquiring Jones from Columbus and extending the star defenseman for $76 million over eight seasons and Dallas inking Miro Heiskanen to a $67.6 million, eight-year contract.

Makar was a point-a-game player last season, his second in the NHL, and the 22-year-old has 94 points in his first 101 regular-season games. He's set to make $8 million next season, $9 million in the second year, then $11 million, $10.6 million, $8.7 million and $6.7 million as part of a contract that takes into account the expected rise of the salary cap.

While the second round was going on, Edmonton completed a $4.4 million, two-year deal with 39-year-old goaltender Mike Smith, and the New York Rangers completed a buyout of defenseman Tony DeAngelo.

The Top 25 Under 25 is a collaboration by members of the Mile High Hockey community. Eight writers have ranked players under the age of 25 as of August 1, 2021 in the Colorado Avalanche organization. Each participant used their own metric of current ability and production against future projection to rank each player. Now, we’ll count down each of the 25 players ranked.
NHL・12 DAYS AGO
The Hockey Writers

Ever since his electrifying playoff debut for the Colorado Avalanche during the 2019 Playoffs, Cale Makar has been on a statistical trajectory for admission into the Hockey Hall of Fame, and barring any unforeseen obstacles, his induction is tentatively scheduled in a decade’s time. This is a preview of what’s to come, as the hockey world watches Makar take the next leap forward in his young career.
NHL・9 DAYS AGO
nbcsportsedge.com

The 2021-22 NHL season is rapidly approaching! Officially less than a month away from the season's opener, now is the perfect time for fantasy managers to ensure they're fully prepared for draft season. Whether you've already begun digging deep into rankings and projections or have yet to start, there's plenty of time to gain an edge over your league-mates. That's why we're highlighting one of our first fantasy hockey mock drafts of the year.
NHL・2 DAYS AGO
WNAW

The Boston Bruins announced that Boston native, former BC Eagle and former Bruins player 31-year-old Jimmy Hayes was found dead this morning in his Milton home. Reports say that the unexpected death of Hayes is not believed to be suspicious, although no cause of death has been announced. Hayes was...
NHL・23 DAYS AGO

Just two weeks ago, the National Hockey League was stunned by the loss of Columbus Blue Jackets goalie Matiss Kivlenieks, who died July 4 after a fireworks accident. At just 24 years old, Kivlenieks’ death was as tragic and untimely as they come, which led to an emotional memorial service — and a noble revelation about the last night of his life — on Thursday.
NHL・9 DAYS AGO
The Game Haus

Could Danton Heinen Breakout With The Pittsburgh Penguins?

When the Pittsburgh Penguins signed Danton Heinen to a one-year, $1.1 million contract, it was practically swept under the rug. After all, they already signed the likes of Brock McGinn and Zach Aston-Reese. Who else could they really sign? Well, the answer was apparently Heinen. However, with the injuries still plaguing Pittsburgh, he’s going to be one to keep an eye on. Who knows, he could break out with his new organization.
NHL・2 DAYS AGO
bostonhockeynow.com

Could Hertl Become A Trade Option For Boston Bruins?

There may be a new white whale when it comes to the Boston Bruins search for a David Krejci replacement as the No. 2 center. Sure, the Bruins have said that Charlie Coyle enters training camp with the inside track as the No. 2 center, and top prospect Jack Studnicka is going to get opportunities to show he’s ready for the big time at 22 years old. But neither of these options is going to give the B’s the kind of production, two-way play or dynamic offensive ability as Krejci, not to mention is big game ability where “Playoff Krejci” routinely leveled up his game during the Stanley Cup playoffs.
NHL・3 DAYS AGO
markerzone.com

The Columbus Blue Jackets announced on Monday that newly-hired assistant coach Sylvain Lefebvre will not be joining the team for the 2021-22 season after he decline to receive the COVID-19 vaccine. In his place, the team announced that former NHL defenceman Steve McCarthy has been promoted from their AHL team in Cleveland.
2 DAYS AGO

On NHL ice for 957 games between three Eastern Conference organizations, Nick Foligno is more than familiar with the Boston Bruins. And prior to joining the Bruins on a two-year, $7.6 million deal, and if Foligno is being honest, he didn’t like it. “I hated these guy when I played...
NHL・1 DAY AGO
phillyhockeynow.com

Chuck Fletcher just doesn’t stop. After a very active July bringing in new faces, he spent August and September locking up a few key pieces of the franchise. That continued on Thursday with the Flyers signing Joel Farabee to a six-year, $30 million ($5 million AAV) contract extension. The contract...
NHL・13 DAYS AGO
prohockeyrumors.com

The Colorado Avalanche are giving another chance to veteran defenseman Jack Johnson, who has signed a professional tryout agreement with the club according to CapFriendly. That means Johnson will attend training camp with the Avalanche in the hopes of earning an NHL contract after spending last season with the New York Rangers.
NHL・14 DAYS AGO
Fort Morgan Times

Defenseman Jack Johnson, the No. 3 selection of the 2005 NHL draft who is 10 games shy of 1,000 for his career, agreed to a professional tryout contract with the Avalanche on Wednesday, a team spokesman confirmed. The 34-year-old played 13 games for the New York Rangers last season. Johnson,...
NHL・14 DAYS AGO

DNVR Avalanche Podcast: Would NHL teams rather have Nathan MacKinnon or Cale Makar?

Rudo and Aj go through a plethora of would you rather scenarios around the leagues. They talk about rebuilds, up-and-coming players, and much more. The fellas also discuss the signing of Jack Johnson as it breaks on-air and AJ has some strong feelings about it. DON’T FORGET TO SUBSCRIBE TO...
NHL・14 DAYS AGO
Forever Blueshirts - New York Rangers News

Following a tweet showing him laid up in a hospital bed, there was some concern over the health of Columbus Blue Jackets forward Nathan Gerbe. It has since been reported that Gerbe, 34, has undergone hip surgery and is facing a 4-6 month recovery time as a result. Gerbe, a...
11 DAYS AGO
inquirer.com

Sometimes, the little trades pay huge dividends. The Flyers are hoping that’s what happens with the 2020 draft-day deal that general manager Chuck Fletcher made with Nashville. He sent the 202nd and 209th overall picks that year to the Predators for the 135th selection, then drafted relentless forward Elliott Desnoyers in that fifth-round.
NHL・14 DAYS AGO
Yardbarker

Welcome to the first Blue Jackets News & Rumors for September. We released it on Tuesday this week with Monday being the Labor Day holiday in the United States. On this week’s edition, the injury bug has already started to hit the Blue Jackets. We discuss the latest injury and prognosis. We also discuss one player’s strong case to make a stacked Team USA in Beijing. And then we’ll end with a prospect off to a hot start in the KHL.
NHL・8 DAYS AGO
theScore

Lefebvre replaced on Blue Jackets' staff after opting against vaccine

The Columbus Blue Jackets replaced assistant coach Sylvain Lefebvre on Brad Larsen's staff after he refused to get the COVID-19 vaccine, the team announced Monday. Steve McCarthy, who's been behind the bench with Columbus' AHL affiliate for the past five seasons, will join the Blue Jackets in place of Lefebvre.
2 DAYS AGO