It's been 12 years since Congress last raised the minimum wage. As a McDonald's worker who makes just $10 an hour, I'm getting sick of Congress delaying another much-needed raise. 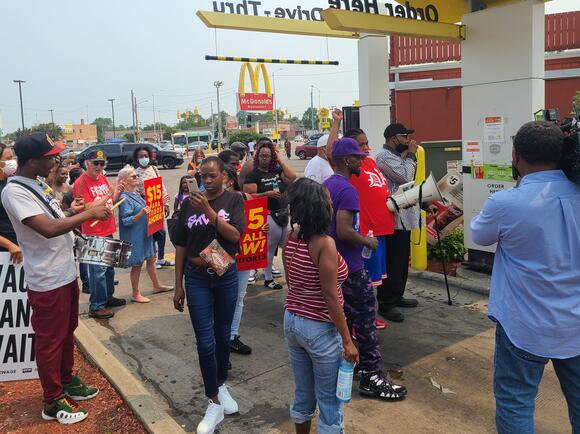 For millions of workers across the country, it's been 12 years without a raise in the minimum wage.

12 years is a long time. In the past 12 years, we've had three different presidents, six Olympics, and seven Fast & Furious movies. But in all that time, the federal minimum wage has stayed the same. The last time it was increased was on July 24, 2009, to the amount of just $7.25 an hour.

That means that companies like the one I work for, McDonald's, can continue to pay us starvation wages, even while they made nearly $5 billion in profits last year in the middle of a global pandemic. McDonald's CEO, Chris Kempczinksi, made $10.8 million last year while cooks and cashiers like me risked our lives serving burgers and fries for a paycheck that's hardly enough to keep a roof over our heads.

That's why on July 20, I joined my co-workers around the country in a strike to demand $15 per hour from companies like McDonald's. We're also calling on Congress to finally increase the federal minimum wage to $15 per hour.

I've heard a lot about the so-called economic recovery, but like many fast food workers across the country, I'm struggling, and the pandemic has made things twice as hard. We have to do twice as much work to keep ourselves, our families and our customers safe. I'm afraid of getting sick, but at the same time I'm worried about paying for car insurance, food and rent.

There are some in Congress who say that states should set their own minimum wages or that it should be up to big corporations to decide base pay. But even while 10 states and some big companies have increased their minimum wages to $15 per hour, here in Michigan, the minimum wage is stuck at $9.65, and I'm still making $10.

Even worse, Michigan has racist laws on the books. These laws, like Michigan's Local Government Labor Regulatory Limitation Act , block Black and brown workers from getting a raise by preventing local governments from raising the local minimum wage. This happens even in cities that are far more expensive to live in than other parts of the state. With these kinds of laws in place, it sometimes feels like it's impossible for us to win, stuck between elected officials passing the responsibility to do their jobs back and forth.

But I got involved with the Fight for $15 and a Union because I refuse to accept that anything is impossible. It's time for a change, and that change can't be just for some - it has to apply to every single worker across the country.

We'll never have a recovery that is equal and just if some workers doing the same job with the same hours thrive, while others barely survive. We cannot leave anybody behind. $15 per hour is the bare minimum we need to get by, period.

Anything less than that is not only a slap in the face, it's a strain on the economy. Workers at other restaurants like Burger King are walking off the job as a group, tired of being treated without respect. Meanwhile, millions of families like mine are forced to rely on public assistance programs, at the cost of nearly $107 billion taxpayer dollars a year. Raising the wage would get people back to work and save taxpayers' money too.

As a member of the Fight for $15 and a Union, I'm fighting for a future where every community can thrive, regardless of race, gender or ZIP code. I know we can get there if big corporations and our elected leaders listen to our demands for $15 and a voice on the job.

We've been fighting for years, and now I'm asking all workers and allies to join us in the call. We need $15, and we need it now.

Obtain a skill, McDonald is mostly for entry level labor, or work your way into their management, don't blame the company for your lack of initiative

America's unemployment system is broken. With millions of workers still without jobs, it's time to finally fix it.

The extended federal unemployment benefits were a success during the pandemic. Congress must cement that success in the reconciliation bill.
PHILADELPHIA, PA・1 DAY AGO
Business Insider

"The answer was to have been vaccinated - but they were not and now they're angry at the medical community for their failure," Dr. Matthew Trunsky said.
MICHIGAN STATE・4 HOURS AGO
Business Insider

The state's vaccine mandate for healthcare workers goes into effect on Monday, potentially causing staffing shortages at some healthcare facilities as thousands of people are not eligible to work.
PUBLIC HEALTH・10 HOURS AGO

Cannabis industry jobs are on the rise, fueled by the Great Resignation

The number of employees in the US legal marijuana sector surpass those who are paramedics, aircraft pilots, or electrical engineers.
LOS ANGELES, CA・1 DAY AGO
Business Insider

Wedding planners and florists say there's a massive flower shortage as weddings boom: "We've never had demand like this"

Demand for flowers continued to grow during the last two years while florists and flower farmers grappled with poor weather and lack of workers.
RELATIONSHIPS・1 DAY AGO
Business Insider

The US could see a brighter fall and winter as COVID-19 cases and deaths decline, a new model shows

Scientists are hopeful that authorizing vaccines for young kids could help prevent a major surge this winter.
PUBLIC HEALTH・1 DAY AGO