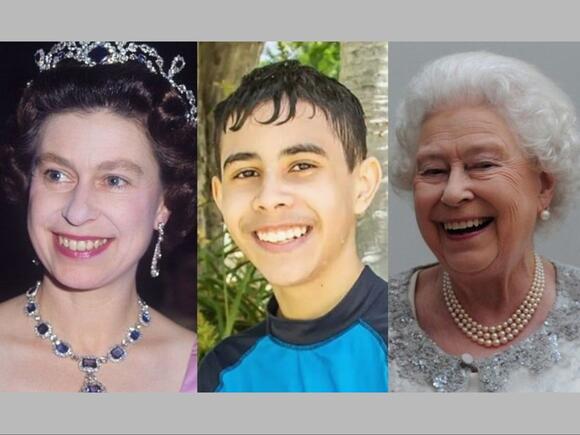 An Australian man who’s adamant that he’s the illegitimate son of Prince Charles and Camilla Parker Bowles has released his latest round of “evidence” for the claims.

Simon Dorante-Day, 55, took to Facebook to share a picture of his son placed alongside two photos of the Queen – one when she was younger and another more recent.

Captioning the post “uummmm an interesting comparison” he was clearly urging viewers to spot a family resemblance between his teenage boy’s smile and that of England’s monarch.

And they duly did. One wrote: “I see [a] mouth and nose similarity. Maybe face shape and hair colour also.”

Another commented that the teen was “the double of the queen in her older years.”

And a third said: “For sure you would have to be blind or bloody ignorant to not believe they are related.”

Last week, Dorante-Day shared a follow-up montage, including a snapshot of himself next to Prince William (who, if his claims were true, would be his younger half-brother).

Commentators flocked to voice their amazement at his “similarity” to the Duke of Cambridge.

“OMG the likeness to William is amazing,I thought it was two pics of Simon,” one gushed.

“My goodness, you and William are twins,” said a second.

And another agreed: “Amazing family resemblance! The evidence is becoming overwhelming.”

Dorante-Day was born in April 1966 and was adopted by a family who had connections to Buckingham Palace.

His adoptive grandparents were Winifred and Ernest Bowlden, both of whom had worked for the Queen and Prince Philip.

Dorante-Day, who now lives in Australia, claims his grandmother told him categorically that he was Charles and Camilla’s son. He believes that he was conceived when the royal couple were 17 and 18 years old.

Over the past few months he has posted constant comments and articles about the royal family and his British roots, as well as what he deems to be photographic “evidence” of his alleged parentage.

Here’s just a glimpse at his portfolio:

The 55-year-year-old’s is so convinced by his own royal claims that he has even gone to the Australian High Court to demand that the duke and duchess take DNA tests, having failed with three previous legal attempts.

Charles and Camilla have never responded to or acknowledged his theory, and Dorante-Day has previously claimed that the pair, who married in 2005, have ignored his letters to them.

Speaking to 7News back in June, Dorante-Day said many of the comparison photos were sourced and shared by royal fans, and that he was constantly blown away by the “uncanny likenesses” they revealed.

"They stop me in my tracks, even to this day," he told the news site. "All the royal fans and supporters who send them to me, they’re amazing.”

He continued: "There are so many people invested in my story now and helping me, it’s really amazing.

"But at the end of the day, it would be really nice to wake up in the morning and not have to look for evidence and keep defending it.

"Every day, I am defending myself, explaining myself and going over the same points to people.

Come on, Charles. If you're so absolutely positive that this man is not your child, you have nothing to be afraid of. Do a DNA test and put thia to rest already!

to my understanding you do know who your parents are, the couples that adopted you. you may not be blood, but they wanted you and they made family with you. unfortunately some children never know who they're parents are, and should be happy that you have parents.

Prince Charles shared a few of Prince Philip’s last words with him before he died. It’s evident from their talk that the Duke of Edinburgh had a dark sense of humor!. In April 2021, Prince Philip died at the age of 99. His son Prince Charles, on the other hand, was able to have a funny talk with his father before his death.
CELEBRITIES・6 DAYS AGO
purewow.com

Who Are ﻿Camilla Parker Bowles’s Children? Here’s Everything We Know

It’s no secret that Camilla Parker Bowles is the stepmother of Prince William and Prince Harry. However, we’ve been much less familiar with the duchess’s biological kids, Tom Parker Bowles and Laura Lopes. That’s why we did some digging to find out everything we can about Camilla Parker Bowles’s children. Keep scrolling for details.
CELEBRITIES・9 DAYS AGO
talesbuzz.com

Prince William’s display of a hot temper during rows with his father, Prince Charles, “horrified” Camilla, Duchess of Cornwall, a royal biographer claimed. According to Robert Lacey in his 2020 book, Battle of Brothers: William and Harry – The Inside Story of a Family in Tumult, Camilla witnessed “earth-shattering” rows between Charles and William after joining the Royal Family in 2015.
CELEBRITIES・3 DAYS AGO

Charles, Camilla, William and Kate’s date with 007 at No Time To Die premiere

The royal foursome will watch No Time To Die – the latest instalment of the Bond franchise – at the Royal Albert Hall. The Prince of Wales, the Duchess of Cornwall and the Duke and Duchess of Cambridge are to attend the glittering world premiere of the new Bond film No Time To Die next week.
MOVIES・8 DAYS AGO
nickiswift.com

Prince Charles rolled with the punches this year. Prince Harry blasted him in his bombshell Oprah Winfrey interview with Meghan Markle and claimed that Charles had cut him off financially after leaving The Firm, as noted by CBS. Harry alleged that had it not been for his inheritance from his mother, he and Meghan Markle would not have been able to move to California.
CELEBRITIES・12 DAYS AGO
purewow.com

Here, all the royal news you need to know for the week of September 23, 2021. Last week, Prince William shared a video on Instagram of himself sitting down at a typewriter (yes, you read that correctly) to pen a special forward for the new book Earthshot: How to Save Our Planet. In the video, the Duke of Cambridge gave followers a glimpse into his home office as well as his unique typing style. Turns out, the 39-year-old types with his pointer fingers only.
NEW YORK CITY, NY・4 DAYS AGO
Insider

The Duke and Duchess of York "have been closer than ever in the past year" and are considering remarrying, a source told Vanity Fair.
RELATIONSHIPS・11 DAYS AGO

Meghan Markle and Prince Harry welcomed their second child and first daughter, Lillibet ‘Lilli’ Diana Mountbatten-Windsor this year on 4 June 2021, two years after the birth of their son, Archie Harrison, on 6 May 2019. During The Duchess of Sussex’s second pregnancy, photos taken when she visited The National...
YOGA・13 DAYS AGO
Popculture

The British royal family just got a little bit larger thanks to the arrival of another royal baby! On Monday, Buckingham Palace announced that Princess Beatrice welcomed her first child, a baby girl, with husband Edoardo Mapelli Mozzi. Beatrice gave birth on Saturday, Sept. 18 at the Chelsea and Westminster Hospital in London, the royal family confirmed, with the little bundle of joy arriving "at 23.42" weighing 6 pounds and 2 ounces.
CELEBRITIES・7 DAYS AGO
The US Sun

A "BEAUTIFUL" personal trainer mum killed herself after "not being able to cope" - and her heartbroken husband has paid an emotional tribute to her. Michelle Sparman, 48, leaves behind two sons - Max, 11 and Sam, 8 - as well as her devastated fiancé Roger Stephens, 51. Michelle, who...
CELEBRITIES・23 DAYS AGO
nickiswift.com

Prince Harry is a royal who has spent most of his life trying to evade the press, but at the same time, knows it's a push-and-pull relationship that he can't escape. And it's been like this for most of his adult life. During an interview for his 21st birthday, Harry admitted that press reports upset him, but he still reads them anyway. "I have to read them just for peace of mind, just to know what they've written," he said. "I don't think it's really a case of dealing with it. I don't know if you can deal with it, you just get on with it."
CELEBRITIES・17 DAYS AGO

Despite tensions, the Duke and Duchess of Sussex are said to be desperate to arrange a visit to the UK in the coming months, so that the Queen can finally meet her namesake great-grandchild, Lilibet.
CELEBRITIES・15 DAYS AGO
Grazia

Meghan Markle doesn’t do things by halves. For her front cover of Time, Markle went for the ultimate trifecta: the power pose, the power hair and the power jumpsuit. As she and Prince Harry, who has been the subject of many internet questions containing the word ‘airbrush’, are fronting the issue that reveals this year’s Time 100, it makes sense that she would choose this moment to dress like an off-duty superhero.
DESIGNERS & COLLECTIONS・12 DAYS AGO
Hello Magazine

Shania Twain looked more in love than ever when she attended the Zurich Film Festival on a rare outing with her husband, Frédéric Thiébaud. The couple enjoyed a date on Thursday evening at the premiere of foreign language film Und morgen seid ihr tot (And Tomorrow We'll Be Dead). Shania...
CELEBRITIES・4 DAYS AGO
The US Sun

LITTLE People, Big World star Caryn Chandler's son Connor is now sober after he was busted in a drunken argument with his reality star mother- and he claims being a new dad has changed him for the better. Connor, 22, was arrested on January 11, 2020 and was charged with...
CELEBRITIES・13 DAYS AGO
Hello Magazine

Katy Perry turned up the heat on Instagram this week as she celebrated some good news with fans. The 36-year-old singer posed for two striking photos wearing a soft pink gown that featured a daring thigh-high split. WATCH: Katy Perry pushes baby Daisy in her pram. What's more, she showcased...
CELEBRITIES・6 DAYS AGO
Variety

Josh O’Connor learned the hard way that an Emmy can be a royal pain as an unintentional weapon. Hugging someone at the end of the Sept. 19 ceremony in downtown Los Angeles while holding his new statuette, the “Crown” star — who had just prevailed for lead drama actor — accidentally knocked himself in the forehead with one of Emmy’s sharp wings. Things got crimson for a second, but thankfully, O’Connor’s bloody Sunday moment was short-lived. Fellow drama actor nominees Regé-Jean Page and Sterling K. Brown came to his aid and had a laugh about the award season capper of a...
CELEBRITIES・5 DAYS AGO
Radar Online.com

Erika Jayne's mother has reportedly been trolling her daughter's critical Real Housewives of Beverly Hills co-stars and haters online. Over the past several weeks, Renee Chahoy has made snarky comments on Twitter via an account that has since been made private. Her Instagram account is also no longer public. According...
CELEBRITIES・11 DAYS AGO
dreddsinfo.com

50 Cent’s Girlfriend Jamira Haines AKA Cuban Link Causes Stir On Red Carpet. 50 Cent has now solidified himself as one of the biggest Hollywood moguls in the world, and last night he shut down the city of Atlanta, with the premiere of this new tv show BMF – a new show which is getting great reviews.
CELEBRITIES・3 DAYS AGO