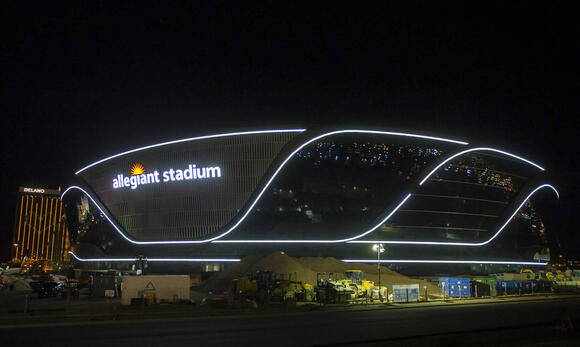 When the Raiders relocated to Las Vegas, it wasn’t the ideal warm welcome. Yes, they played in Allegiant Stadium, but there was one big detriment to the experience: The seats were mostly empty.

Last August, the team announced it would not be having fans attend games for the 2020-21 season due to COVID-19, via Kevin Patra of NFL.com.

Fast forward to almost a year later, and Allegiant Stadium is planning to have events that include Guns N' Roses, WWE SummerSlam, and the Las Vegas Rugby Cup.

Not only that, but Raiders fans will finally get to see their team in action at their new home.

Home games at Allegiant Stadium also will have a nightclub right behind the north end zone.

“Best (stadium) I’ve ever seen by far, it’s ridiculous,” said first-round draft choice Alex Leatherwood during a tour of Allegiant Stadium in May. “I mean, I thought Bryant-Denny (Stadium) was nice — this is some like state-of-the-art stuff, it’s real nice.”

Food and beverages also will be one of the most alluring components in Allegiant Stadium.

Raiders legend and Pro Football Hall of Fame inductee Charles Woodson introduced his brand, Intercept Wines, at an Allegiant Stadium media tasting event at the beginning of the month.

There is a lot to look forward to for the Las Vegas faithful as they prepare for an overdue proper greeting.

Raiders Nation is one of the biggest fan bases in sports. You can bet they’ll be loud and ready to cheer on their Raiders in new territory this August.

Tell us what you think in the comment section below.

Want the latest breaking Las Vegas Raiders news delivered straight to you? CLICK THE FOLLOW button at the top of the page. Don't miss any of the latest up to the second updates for your Las Vegas Raiders when you follow on Twitter @HondoCarpenter, @HikaruKudo1 @BaydounDarin

The Las Vegas Raiders have reportedly made a tough decision on quarterback Marcus Mariota. According to a report from NFL Network insider Ian Rapoport, the Raiders are placing the veteran quarterback on the injured reserve list. Mariota suffered a quad injury during the Raiders’ opening weekend win over the Baltimore...
NFL・4 DAYS AGO
Audacy

Audacy’s Trysta Krick hands out her own version of the Emmy awards around the NFL as she delivers her biggest takeaways from an eventful Week 2.
NFL・2 DAYS AGO
nevadasportsnet.com

From Douglas to Elko to Virginia City to Reno to Fallon and beyond, every high school football team in Nevada now has its helmet displayed inside the home of the state's only NFL team. The Las Vegas Raiders unveiled Tuesday afternoon a 96-helmet display in the shape of the Silver...
NEVADA STATE・1 DAY AGO
Ottumwa Courier

Raiders excited for 1st opener in Las Vegas with fans

The opening season for the Raiders in Las Vegas proved to be a bit of a dud. With no fans allowed at games, the Raiders stumbled to a 2-6 record at home in their first season since moving from Oakland and missed the playoffs for the 17th time in 18 seasons.
NFL・13 DAYS AGO

The Entertainment Hub of the Universe came through tonight. The Las Vegas Raiders rallied against a tough Baltimore Ravens team and gave Las Vegas a highly entertaining win with a 33-27 overtime victory over the Ravens in the first Raiders game with fans at Allegiant Stadium on Monday Night Football after the domed, 65,000-seat stadium opened in late July 2020 during the COVID-19 pandemic.
NFL・9 DAYS AGO
jammin1057.com

The Las Vegas Raiders gave a rabid crowd of almost 62,000 fans at Allegiant Stadium all they hoped for and more as they pulled out a dramatic 33-27 overtime win over Baltimore on Monday night. It was the Raiders’ first home game at Allegiant Stadium that was played before fans as fans weren’t allowed to attend home games last season because of the pandemic.
NFL・8 DAYS AGO
Sportsnaut

While Derek Carr has the Raiders off to a 2-0 start, Lamar Jackson finally got the best of Patrick Mahomes and the Chiefs.
NFL・2 DAYS AGO

GAME 4 – SOU (1-2) vs. Carroll College (1-2) 1 p.m. Saturday | Raider Stadium | Ashland, Oregon. ASHLAND – The two winningest teams in the Frontier Conference over the last decade are on the ropes and in must-win position early as they prepare to clash Saturday at Raider Stadium.
ASHLAND, OR・8 HOURS AGO
The Spun

The Dallas Cowboys have reportedly parted ways with one of their quarterbacks. According to ESPN NFL insider Jeremy Fowler, the NFC East franchise has released young quarterback Ben DiNucci. The former James Madison University quarterback played in three games for the Cowboys last season. He started a Sunday Night Football...
NFL・22 DAYS AGO
The Spun

Earlier this offseason, the Washington Football team released tight end Thaddeus Moss after one season with the team. He didn’t have to wait very long for his next NFL opportunity, though. The Cincinnati Bengals claimed the son of NFL legend Randy Moss, who was re-united with his college quarterback – Joe Burrow.
NFL・22 DAYS AGO
Popculture

A two-time Super Bowl champion is calling it a career. On Tuesday, the Arizona Cardinals placed defensive back Malcolm Butler on the reserve/retired list after signing with the team this year. Butler has missed practice all week as he's been dealing with a personal issue, leading to him contemplate retirement. However, it's possible Butler could return to the team if he wants.
NFL・21 DAYS AGO
The Spun

The Colts had four quarterbacks on the roster on Tuesday morning. That number dwindled down to three by Tuesday afternoon. Indianapolis waived quarterback Brett Hundley on Tuesday afternoon, per Jim Ayello of the IndyStar. The Colts, in the meantime, are moving ahead with Carson Wentz, Jacob Eason and the injured Sam Ehlinger.
NFL・22 DAYS AGO
FanSided

The KC Chiefs were right about Le’Veon Bell

Last year, during the NFL postseason, Le’Veon Bell had a clear lane ahead of him, the exact sort of scenario for which he was signed by the K.C. Chiefs at midseason. It was the ideal setup for the recently maligned veteran, a chance on the NFL’s biggest stage in front of primetime cameras to show what he can still do before entering another chance for a free agent payday.
NFL・14 DAYS AGO
Yardbarker

The Atlanta Falcons weren't the only ones to have a tough debut on Sunday. Atlanta was blown out 32-6 by the Philadelphia Eagles on Sunday, and former Falcons receiver Julio Jones is in hot water with Tennessee Titans head coach Mike Vrabel after getting a personal foul in the first quarter.
NFL・9 DAYS AGO
saturdaydownsouth.com

The Miami Dolphins have cut wide receiver Robert Foster, per a report from Texans beat reporter Aaron Wilson. According to Wilson, Foster has been released from the team’s injured reserve after coming to an injury settlement. Back on Aug. 24, he was waived with an injury designation but was transferred to the Dolphins’ IR after he was unclaimed by the other 31 NFL teams on the waiver wire.
NFL・23 DAYS AGO
FanSided

Colts QB Carson Wentz is on the COVID list, and we all assume that he has not been vaccinated against the virus, unlike the vast majority of NFL players, who want to avoid a forfeit. Indy Star columnist Gregg Doyel has seen enough of Wentz, whom he bashed in his...
NFL・21 DAYS AGO
AOL Corp

Packers Release Another One Of Aaron Rodgers’ Favorites

The Green Bay Packers released tight end Bronson Kaufusi this afternoon, despite the fact Aaron Rodgers praised the BYU product recently. We’ve seen the Packers get rid of guys Rodgers likes before, and their release of wide receiver Jake Kumerow in 2020 is the biggest example. Rodgers told people he thought Kumerow was Green Bay’s second-best wideout in camp, and his disapproval of the move contributed to the star quarterback’s discontent with the organization this offseason.
NFL・22 DAYS AGO