Baby Peggy was one of the most successful child actresses in silent films, and even though she was a self-made millionaire at five years old, her life was filled with pain and family issues.

Diana Serra Cary, the name Baby Peggy chose to ensure anonymity after walking away from the entertainment industry, was born in October 1918 and began working as a child actress when she was only two years old.

The bob-haired girl starred in nine films and 150 shorts between 1921 and 1925. At the peak of her career, she earned up to $1 million a year. Unfortunately, her career was relatively short.

BABY PEGGY WAS A STAR

In the middle of a challenging era, Baby Peggy stole America’s heart with her dramatic expressions and impressive range. Critics often talked about her having “five faces:” miserable, amused, brave, saucy, and angelic.

Her father, former stuntman and cowboy Jack Montgomery had a lot to do with it as he raised her to answer commands immediately. She once admitted her dad would snap his fingers and ask her to cry, laugh, or be frightened, and she would do it. “He called it obedience,” Baby Peggy explained. 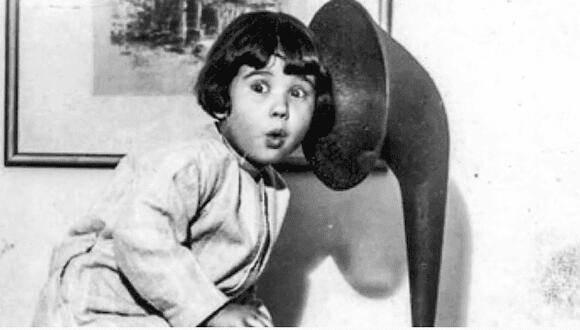 She was so popular that she received more than 1.2 million fan letters when she was only six years old. If that wasn’t enough, she had a line of Baby Peggy dolls and jewelry.

Due to all of her hard work, she and her parents lived in a mansion in Beverly Hills. Apart from having maids to fulfill her needs, Baby Peggy also traveled in a chauffeured limo.

To become such a famous star, Baby Peggy had to work a lot more and harder than what would even be considered acceptable nowadays. Studios made her work eight hours a day, six days a week, with no breaks or schooling time.

They would also put her in dangerous situations, like making her character escape a burning room reportedly doused with kerosene. Her adult co-stars frequently pushed her around to follow the script, too.

Unfortunately, Baby Peggy’s family life was far from perfect. Her dad controlled her earnings and schedule but was greedy, so he spent his daughter’s money like it was nothing and didn’t even save some for her future.

Baby Peggy once said that her parents probably thought her career would never end as they didn’t send her or her sister to school. They just “grew up and worked.”

Things started to get complicated in 1925 when Montgomery got involved in a financial dispute with producer Sol Lesser. It is important to point out that Baby Peggy was only six years old at the time.

Although she had already secured a $1.5 million contract, Montgomery fought over her salary. As a result, the initial contract was canceled, and she was blacklisted from Hollywood.

Baby Peggy’s parents still wanted to keep up their luxurious life, though, so they forced her into the vaudeville circuit and made some money out of it. Eventually, her parents spent her money on hotels, travel, and expensive cars.

Goodnight, Baby Peggy (Diana Serra Cary) who has died aged 101. A silent movie star who earned $1 million a year before retiring at the age of six. pic.twitter.com/iWHwr8UgmZ

END OF HER CAREER

In the early-30s, when Baby Peggy was a teenager, she tried to win back her career as an actress, but most people had already lost interest in her. In 1938, she left Hollywood for good.

Her career’s downfall negatively impacted her relationship with her parents. She once admitted that her family was “upside-down,” and nobody ever talked about her time in the entertainment industry again. She added:

“I could never be important to my father again after I became ‘me.’ My father had this feeling that I disappeared. It was as if somebody died.”

In 1938, she married Gordon Ayres, a movie extra, but they parted ways ten years later. Baby Peggy then married artist Bob Cary in 1954. They had a son, Mark, and stayed together until he died in 2001.

Baby Peggy spent her adult life working as a freelance journalist, author, and film historian. On February 24, 2020, she passed away in Gustine, California. She was 101 years old. Rest in peace, legend.

Thank you baby "Peggy" for shining light of your personal life, for all family and friends, for all who she loved and for all who loved her.❤️🕊️🌺

Unbelievable what her father did to her. Wonder why the mother isn't really talked about? Greed knows no bounds.I've seen a few of her shows. She was a doll for sure. But became a stunning lady! RIP! Beautiful! 💔🙏

Jackie Coogan law. He played uncle Fester of the Adams Family. He to was deprived of his earnings of being a child actor. His parents left him broke after spending his income.

Hannah Hargrave Pitch Perfect's Rebel Wilson showed off her weight loss wearing skintight lycra leggings but it wasn't her appearance which had fans flipping out. Rebel Wilson sparked another fan frenzy on Friday with a video clip which had her social media followers on the edge of their seats. The...
BEAUTY & FASHION・23 DAYS AGO
Amomama

Late actress Lana Turner may have been one of the most prominent actresses in the 1940s, but her love life wasn't a walk in the park. Only one child was born out of her three known pregnancies. Lana Turner's story and how much control MGM had over her life will...
CELEBRITIES・4 DAYS AGO
SheKnows

Longtime fans, cast mates, and crew members of Sex and The City were shocked yesterday when news of actor Willie Garson’s death became public. The beloved actor passed away at the age of 57, following a towering career that included credits in TV series such as Hawaii Five-0, White Collar, and NYPD Blue. Among the emotional, heartfelt tributes that came following Garson’s death, none were as touching as the one shared by his son, Nathen.
CELEBRITIES・4 DAYS AGO
Amomama

E-40 has amassed incredible fame and fortune in the music industry despite his tough childhood and addiction problems. In addition to his successful career, he is also a committed husband and a supportive father. Earl Tywone Stevens Sr., popularly known as E-40, has been in the rap game for several...
RELATIONSHIPS・3 DAYS AGO

Karyn Parsons, who starred in "The Fresh Prince of Bel-Air," is now a mother to two kids and loving wife to the renowned director Alexandre Rockwell. Here is everything about her real-life family. Karyn Parsons brought her character of Hilary Banks to life in one of the most iconic Black...
CELEBRITIES・2 DAYS AGO
Amomama

Despite living a happy life and enjoying a successful career, Darla Hood died in tragic circumstances due to a heart failure caused by a doctor's mistake, leaving her co-star Billy "Buckwheat" Thomas so sad that he died the next year. On November 8, 1931, a banker named James Claude Hood...
CELEBRITIES・3 DAYS AGO
Amomama

Luenell's only daughter Da'Nelle Campbell who once attacked her mother's personality seems to have changed her position, and the duo is in good spirits and appears to be bonding like BFFs. Meet the changed daughter. Luenell is a woman of incredible talent who seems to be aging gracefully and living...
CELEBRITIES・1 DAY AGO
Amomama

Rocky Carroll has fought for over thirty years to maintain relevance in Hollywood. He is motivated by his only daughter, Elissa, and his wife, Gabrielle Bullocks, who is an established architect. Let's meet Carroll's little family. American actor Rocky Carroll has been in the entertainment industry for more than three...
FAMILY RELATIONSHIPS・1 DAY AGO

"Lean on Me" star Beverly Todd who acted as Mrs. Joan Levias, experienced a tragedy that she is yet to recover from. After entertaining the joys of motherhood, the actress lost her only child—insights into the heartbreaking story and her life. Beverly Todd is a woman of distinct character and...
CELEBRITIES・17 HOURS AGO
Amomama

Ron Howard from ‘Happy Days’ Is a Proud Father of 4 Children, 2 of Whom Followed His Path

Ron Howard has many achievements under his belt, including the title of award-winning director. Yet, his most revered title is being a father to his four children. Ron Howard, 67, is known for his movies "The Da Vinci Code" and "Angels and Demons," in which he co-starred alongside his wife. He has also directed and won awards and nominations for several movies, including "A Beautiful Mind" and "Frost/Nixon."
FAMILY RELATIONSHIPS・8 HOURS AGO
Amomama

After Losing Husband to Cancer, a Woman Shares Their Incredible Love Story and Readers Are 'Wrecked'

A woman shared her story with the world, and it was beautifully heartbreaking. She lost her husband to cancer, and her account of their love touched hearts and left many in tears. Jenn Henricksen met her husband Kyle just after she had finished high school, and their relationship took off...
RELATIONSHIPS・2 DAYS AGO
Amomama

"Perry Mason" was an American hit show in the years it aired, but one of its main characters, William Talman, left a valuable lesson to his fans before his death to cancer a few weeks after. William Talman warmed the hearts of American movie lovers when he played Hamilton Burger,...
CELEBRITIES・2 DAYS AGO

In an emotional segment filmed for "The Drew Barrymore Show," the star revisited the facility her mom took her to when she was a teenager.
CELEBRITIES・12 DAYS AGO
Amomama

Over the years, the Kardashian clan has become known as Hollywood’s most powerful dynasty, but not many fans know that there are other famous family ties in Hollywood celebrity dynasties. Some old names that once shook the movie industry would undoubtedly have been lost in the younger generation who are...
FAMILY RELATIONSHIPS・29 DAYS AGO
Popculture

Willie Garson Leaves Inspiring Message Behind in His Final Tweet

Just two weeks before his death at the age of 57, Sex and the City star Willie Garson took to social media with a message of love and kindness. Shared on Saturday, Sept. 4, Garson encouraged his followers to "be kind to each other" and to "approach kindness." The post marked his final on the social media platform before his Tuesday passing.
CELEBRITIES・4 DAYS AGO
Daily Mirror

This Morning competition winner Heather Bone tragically died today at the age of 41 following a heartbreaking battle with breast cancer. The beloved TV guest, who appeared on the show multiple times, shared her devastating story and inspiring outlook when she took part in the Dosh on your Doorstep challenge back in June.
CELEBRITIES・11 DAYS AGO
TVShowsAce

Joy Forsyth Leads Her Children Down A Forbidden Path

Former Counting On star Joy Forsyth is showing fans that she’s taking her children, Gideon, 3, and Evelyn, 1, down a forbidden path. She doesn’t seem to mind doing things differently than she’s used to. Now, fans are praising her for making this decision for herself and her kids. So,...
FAMILY RELATIONSHIPS・3 DAYS AGO
Ok Magazine

In an exclusive excerpt from his new book, The 4 Word Answer: who are you in 4 words, Rob Shuter, former publicist to Jessica Simpson, Diddy, Alicia Keys, Jon Bon Jovi, Naomi Campbell and even Jennifer Lopez, reveals that Jessica Simpson is the smartest star he has ever met. Article...
CELEBRITIES・4 DAYS AGO
Bossip

When asked whether he felt "pressure" to pick a Black woman in the end, James replied: "One hundred percent."
CELEBRITIES・1 DAY AGO