At 78, singer Claudette Robinson, who was previously married to former The Miracles bandmate Smokey Robinson 35 years ago, continues to mesmerize fans with her beauty.

Smokey's ex-wife recently flaunted her age-defying look in a picture she recently posted on Instagram. In the stunning photo, Claudette wore a bright red outfit and sported perfect blonde hair. 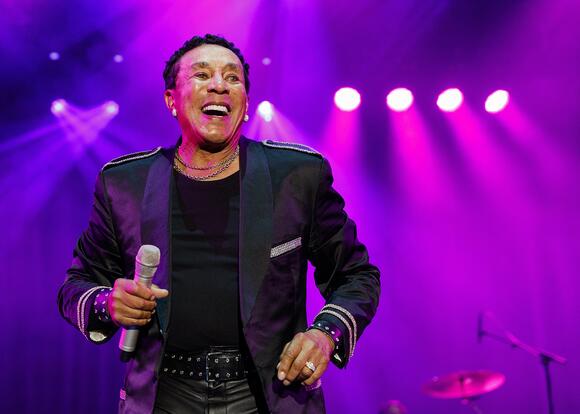 Claudette's sensational ensemble resembled that of a regal queen. Beside her in the snap is Chubby Checker, an acclaimed rock and roll singer and dancer. Claudette wrote in the caption:

"Twisting into the weekend. With @officialchubbychecker."

The youthful singer's stunning outfit featured tiny, red beads at its center and a red belt around her slim waist. Her long, side bangs covered her left eye.

While Claudette's blonde hair covered half of her face, she still dazzled fans with her striking red lip and bright smile. Hundreds of her followers reacted with awe.

His cocaine addiction led Claudette to end their marriage.

"Looking GOOD," a fan commented about Claudette's ageless beauty and gorgeous style. Other followers left nostalgic remarks regarding Checker's timeless songs, such as "The Twist."

Like Checker, Claudette left a permanent mark on her fans through her incredible music career. One of the famous singers of the band The Miracles, she was dubbed the "First Lady of Motown."

The R&B band, who previously failed to cut an audition, rose to prominence in late 1950, after Berry Gordy Jr., a successful singer-songwriter, discovered the group's unique sound.

"We played original songs [at the audition], and I think that's what caught Mr. Gordy's ear," Claudette revealed in a recent interview with uDiscover music. She was a member of the group from 1957 until 1972.

Fans remember Claudette by the band's chart-topping songs, The "Got A Job," "You've Really Got a Hold on Me," and "The Tears of a Clown."

Besides these iconic songs, she was also known for her relationship with Smokey, one of the co-founders of The Miracles. While in the band, Claudette was married to the 81-year-old singer in 1959.

But a seemingly happy union turned sour, leading the couple to separate. Claudette initially requested Smokey to reconsider their marriage, but the latter's love for her had fizzled out.

When Smokey realized his relationship with Claudette was crumbling, he began using cocaine. His cocaine addiction led Claudette to end their marriage.

Three years after their divorce, the former couple settled a legal case over song rights. But they would meet in court more than 20 years later over recaptured copyrights.

When the former couple entered into a stipulated judgment over song rights back in 1989, they reportedly did not address what would happen once the rights to the compositions are regained.

As of December 2014, it was reported that the former couple's legal dispute, which concerned termination rights under the 1976 Copyright Act, was nearing resolution. Both parties reportedly informed a judge they had, in principle, reached an agreement.

Despite their divorce and legal dispute over song rights, the former couple has remained friends. Following their divorce, Claudette has embarked on a journey of self-discovery.

She is presently working on an autobiography and a pictorial cocktail book for her ex-husband. For his part, Smokey has been happily married to Frances Robinson since 2002.

This month, Sami Sheen, Denise Richards’ oldest teenage daughter, made some shocking allegations. A source has since revealed how the actress feels about her daughter's claims. In a new report, Page Six said Sami Sheen, 17, released a TikTok Video last week where she alleged that she’s now much happier...
CELEBRITIES・2 DAYS AGO
Amomama

Find out the details of Marvin Gaye's relationship with his second ex-wife, Janis Hunter, who had three children with him and wrote a book to tell the tale of their love. Marvin Gaye is regarded as one of the most iconic singers in music history. He helped to shape the sound of Motown in the 1960s, which earned him the nickname "Prince of Motown" and "Prince of Soul."
THEATER & DANCE・2 DAYS AGO
Amomama

Whoopi Goldberg is a fashion icon and actress who confidently owns her space. She recently appeared at the 2021 Met Gala in a custom-made, wrinkled purple dress; however, fans criticized the look, with many adding that it was the worst dress of the night. Talk show co-host, Hollywood legend, and...
BEAUTY & FASHION・3 DAYS AGO
Amomama

Thanks to Gary Lewis and a DNA test, Suzan Lewis proved that she and late comedian Jerry Lewis were blood-related. Still, she was homeless even though Jerry left behind millions. Suzan Lewis has been making headlines for several years, trying to make her father, late actor and comedian Jerry Lewis,...
NEW YORK CITY, NY・2 DAYS AGO

Smokey Robinson's ex-wife, Claudette Robinson, went through many ups and downs through the years, but she never let it cloud her dreams and determination to live her best life. Veteran singer Claudette Robinson is proving that age has nothing on her. The 79-year-old recently shared a jaw-dropping picture on Instagram.
MUSIC・8 DAYS AGO
New Jersey Stage

American entertainer Ben Vereen has enjoyed a stellar career as an actor, but he has experienced tragedy in his personal life after losing two of his children to early deaths. American actor Ben Vereen is one of the most accomplished and versatile entertainers. He is famous for his legendary performances, which have transcended time and have become part of the nation's artistic legacy.
NEWARK, NJ・26 DAYS AGO
Amomama

Thinking that her husband was set to be taken over by her apparent next-door seductress neighbor, a wife decided to finally take action. She called the police to take care of her unlawful neighbor once and for all. In the Quintana Roo state of Mexico, Yuvitza E took offense to...
LAW ENFORCEMENT・21 HOURS AGO

Now-former Dancing with the Stars pro Keo Motsepe has spoken out after to not being asked back for season 30 of the show, the US version of Strictly Come Dancing. The news was announced on Thursday (September 2), with Keo seemingly hinting he'd have liked to return. "While it's disappointing...
TV SHOWS・14 DAYS AGO
Best Life

Hayley Mills was one of Hollywood's most famous child actors of the 1960s. She starred in some of the era's biggest films, including That Darn Cat! and The Parent Trap, which turned then-14-year-old Mills into a major star. It also should have given her a major payday, but as Mills recounts in her new memoir Forever Young, which comes out on Sept. 7, she was shocked to find herself nearly penniless at the age of 21, after starring in more than a dozen movies. Read on to find out how Mills, now 75, was nearly broke and about her decade-long fight to get her money back.
CELEBRITIES・13 DAYS AGO
enstarz.com

What Did Jane Powell Die Of? 'Royal Wedding' Actress' Cause Of Death Revealed

The young actress in numerous MGM musicals, including "Royal Wedding" and "Seven Brides for Seven Brothers," Jane Powell, passed away at 92, Thursday, September 16. The musical actress' spokesperson Susan Granger confirmed her death to Entertainment Weekly due to natural causes at her home in Wilton, Connecticut. Sources also reported...
CELEBRITIES・1 DAY AGO
Amomama

American actress and singer Lisa Hartman and husband Clint Black welcomed their first and only child in 2001. The beautiful baby girl, Lily Pearl Black, is growing up to be a gorgeous musician, too. Hartman and Black's romance dates back to 1990 when she attended one of Black’s shows with...
RELATIONSHIPS・30 DAYS AGO

Sir Elton John broke the sad news on Thursday that he has been forced to reschedule his Goodbye Yellow Brick Road tour due to ongoing health issues. The singer shared a heartfelt statement on social media in which he revealed he has been in "considerable pain and discomfort" after a nasty fall left him with a damaged hip.
CELEBRITIES・2 DAYS AGO
Billboard

Jennifer Hudson celebrated her 40th birthday on Sunday with a very special (identical) guest: her new wax figure in Madame Tussauds in New York. Madame Tussauds unveiled the new figure during Hudson's party at New York's SUMMIT One Vanderbilt with her close friends, family and, well, her wax self. The figure, which was created by a team of artists in London over the museum's standard six-month period, is now exclusively on display in the popular wax museum in Times Square. Hudson's statue is wearing the Galvan Vera velvet gown that the superstar wore at the 2019 AFI Lifetime Achievement Award in honor of Denzel Washington when she performed "A Change Is Gonna Come," as well as Christian Louboutin heels Hudson herself donated.
CELEBRITIES・4 DAYS AGO
Amomama

For many reasons, OJ Simpson’s name will forever be associated with crime and violence, but before the dark years of his life, the former sports star suffered some personal loss that would go on to change his life. OJ Simpson’s career as an NFL star was covered with glory and...
NFL・4 HOURS AGO
Amomama

Andy Griffith was a charming actor, and his works were widely appreciated, but behind the scenes, there happened to be some real shenanigans going on, which included his affair. “The Andy Griffith Show” was widely watched in the years that it aired, and so was the popularity of its lead...
RELATIONSHIPS・9 DAYS AGO
The Independent

Kim Kardashian has amused fans by correcting Ellen DeGeneres after the talk-show host assumed a gold chain worn by the reality star’s two-year-old son Psalm West was “fake”.On Thursday, the Keeping Up With The Kardashians star sat down for an interview with DeGeneres on The Ellen Show, during which they discussed the Skims founder’s four children, who she shares with estranged husband Kanye West, and how they are “so different”.When the conversation turned to Kardashian’s youngest child, Psalm, DeGeneres identified him as the one who was pictured on the reality star’s Instagram wearing a thick gold chain around his...
CELEBRITIES・1 DAY AGO
Amomama

Girl Inherits House from Granny She Never Knew, Arriving There, She Finds Something Priceless — Story of the Day

When I turned twenty-one, I discovered I'd received an inheritance and it changed my life. On the day I turned twenty-one, what should have been a joyous celebration with my parents turned into a screaming match with my father after a FedEx delivery man knocked on our door. "Delivery for...
FAMILY RELATIONSHIPS・3 DAYS AGO
Amomama

The Kardashians are known for their magical looks whenever they pose before a camera, but after seeing Rob Kardashian's daughter Dream, fans had a little question over who she resembles. The Kardashian family is undoubtedly one of the most famous families and arguably the most successful reality show family with...
CELEBRITIES・13 HOURS AGO
Amomama