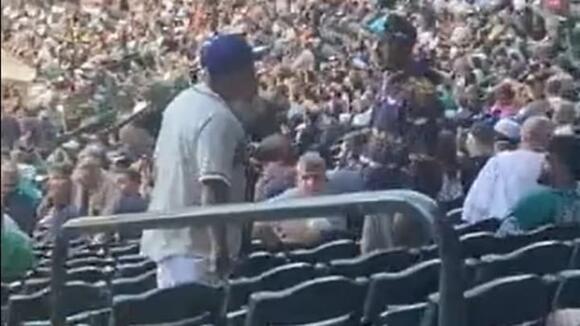 The Seattle Mariners are having a decent season and managed to improve their record to 52-46 with a 4-3 win over the Oakland A's Friday night. Apparently, that wasn't enough to keep one Mariners fan happy. He decided to get into a fight in which he landed several big punches Friday night.

We're not sure what started this bout, but the Mariners fan squared off with a guy in colorful purple sweater. He landed one huge sucker punch with his right hand that should have knocked his opponent out. But purple sweater has a chin of solid granite, and he stepped up for more, and ate another right for good measure.

There was obviously some talking that preceded this incident, and while purple sweater clearly thinks he came out looking good here by waving goodbye at the end, but come on man.

Can Shohei Ohtani and MLB Please Take a Backseat to the NBA Finals For a Few Days?

Unlike our other stadium fight this week, only two guys got involved and neither was topless.

Typical sports fans in today’s world. Just can’t resist acting like an animal in front of families that are just trying to enjoy a game.

Those punches looked like monster punches, but they probably felt like getting hit by a girl. ( oh sorry, that wasn"t correct to say. Sorry to any one I offended!)

That doesn't look like self defense, should learn to control anger by Christ. Seems as if God is withdrawing His spirit to where the devil has more power to rage in hearts of men due to evil decision making. Culturally speaking as a whole not individually.

MLB has partnered with Candy Digital to release unique NFT editions for all 30 MLB teams as part of the MLB Stadium Series, giving fans the chance to bid on digital collectibles featuring artwork of each team’s venue created by renowned digital artist S. Preston, who is known for his minimalist designs.
MLB・12 DAYS AGO
The Oregonian

The MLB All-Star is coming to the Pacific Northwest in 2023. Seattle’s T-Mobile Park, home to the Mariners, has been selected to be the host of the event and related festivities in 2023. The deal to bring the game back to Seattle is being finalized, according to ESPN. Seattle last...
MLB・12 DAYS AGO
chatsports.com

The right field corner at T-Mobile Park is an odd little place, with its Grandma’s Attic-esque corner and jigsaw puzzle shape. With no bullpen or batter’s eye garden, right fielders at T-Mobile are subject to the cheers and boos of the crowd with little buffer zone, sometimes literally having to get up close and personal with fans as they try to track balls into the right field corner.
MLB・12 DAYS AGO
MLB Game Highlights

Henry Ramos lines a two-run double into left field, giving the D-backs a 3-1 lead in the top of the 6th.
14 DAYS AGO

T-Mobile park will receive $50 million in upgrades over the next two years as the Seattle Mariners prepare to host the Major League Baseball All-Star game in 2023. Rumors that the game was coming back to Seattle after 20 years were confirmed Thursday in a joint press conference with city and sports officials, including MLB Commissioner Rob Manfred, Mariners Chairman John Stanton and Seattle Sports Commission President Beth Knox.
SEATTLE, WA・10 DAYS AGO
Sportsnaut

Mike Trout confirmed before the Angels' 14-1 win over Seattle that he won't play again this season because of a calf injury that's kept him out since May.
MLB・1 DAY AGO

Albert Pujols and the Los Angeles Dodgers are coming off a series loss to the San Francisco Giants, which resulted in them losing the top spot in the National League West Division. They will now try to recover when they continue a road trip that will bring them to Pujols’ old stomping grounds — Busch Stadium, the home of the St. Louis Cardinals.
MLB・20 DAYS AGO
Outsider.com

A very scary and unusual moment occurred during the MLB game between the St. Louis Cardinals and the New York Mets on Monday, Sept. 13, at Citi Field in New York City. It’s a moment that one writer said he has “never seen.”. According to For the Win, during the...
MLB・13 DAYS AGO

Baseball is so awesome because there’s really no such thing as a buzzer beater. There are, occasionally, walk-off plays to end games, though, and they’re almost always insane. And, a lot of times, those walk-offs are determined by literal inches. That’s why it’s important to put players in a position...
MLB・22 DAYS AGO
MassLive.com

BOSTON — The yellow and blue uniforms are back. The Red Sox will wear their alternate jerseys with the Boston Marathon color scheme for all three games at Fenway Park against the Baltimore Orioles this weekend. Boston and Baltimore play the first game of their three-game series at 7:10 p.m....
MLB・9 DAYS AGO
CBS Sports

With three weeks remaining in the 2021 regular season, the New York Yankees have been arguably the streakiest team in baseball, and they're currently fighting for a wild-card spot. They've lost four straight series since their 13-game winning streak, including series losses to the Angels, Orioles and Mets. Not exactly powerhouses, you know?
MLB・13 DAYS AGO
Detroit News

So, Akil Baddoo, all those hours you spent playing Miguel Cabrera in video games, did he ever get nine straight hits?. "Um, nope," the Tigers rookie said with a laugh. "This is a lot better seeing it in person, though." Nearly lost in the late fireworks of the Tigers' dramatic...
MLB・16 DAYS AGO
ClutchPoints

Danny Duffy likely would not get to pitch for the Los Angeles Dodgers this season after all. According to Dave Roberts, the team is shutting down the southpaw for the remainder of the 2021 season, as Duffy continues to struggle recovering from an upper-body injury, per Mike DiGiovanna of the Los Angeles Times.
MLB・15 DAYS AGO
chatsports.com

PHILADELPHIA — On Monday morning, Orioles manager Brandon Hyde texted Cedric Mullins and told his All-Star center fielder to come to Citizens Bank Park late. Mullins was getting a day out of the lineup, and Hyde didn’t want him taking batting practice, either. He delivered a message he once did to high-impact players when he was a member of the Chicago Cubs’ coaching staff.
MLB・3 DAYS AGO
Sports Illustrated

The Cardinals continue their September surge to run their winning streak to a club-best 15 games.
MLB・1 DAY AGO
NBC Chicago

Playoff-minded Schwarber: Non-tender ‘better’ for career originally appeared on NBC Sports Chicago. Kyle Schwarber, the first homegrown core player kicked to the curb by the Cubs during their nine-month roster purge, watched Kris Bryant’s Wrigley Field homecoming Friday from the other side of town. Among other things, he wondered whether...
MLB・16 DAYS AGO