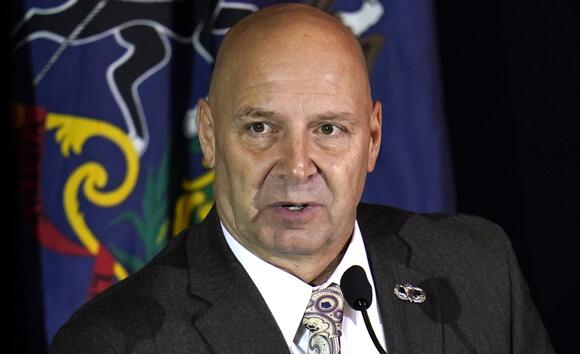 Subpoenas for a top Pennsylvania Republican lawmaker's "forensic investigation" of the 2020 election appear to be on the horizon.

On Friday, state Sen. Doug Mastriano, chairman of the Intergovernmental Operations Committee who sent letters earlier this month to three counties seeking information and materials related to the 2020 election and 2021 primary , said the trio would want "legal cover" if they comply with his request for the audit, to which Democratic officials in the state have voiced opposition.

The panel will "probably" vote on subpoenas, along with figuring out the chain of custody, sometime in mid-August, Mastriano told One America News Network, noting a meeting needs to be scheduled. He also predicted there would be some sort of "court fight."

Letters were sent to Philadelphia, York, and Tiago counties earlier this month. Mastriano set a deadline of July 31 and threatened to pursue subpoenas if they did not comply, setting up a process reminiscent of the run-up to the GOP-led Arizona Senate's audit in Maricopa County. Some officials in these Pennsylvania counties already signaled they would not fully comply with the request as things stood.

Shortly after Mastriano sent his letters, Pennsylvania's Department of State advised all counties in the state against giving "third-party entities" access to the equipment or they'd risk decertification.

Voting machines in Pennsylvania's Fulton County were decertified after local officials cooperated with a separate audit and allowed a third-party contractor to access data, acting Secretary of the Commonwealth Veronica Degraffenreid told county officials in a letter on Tuesday.

Mastriano, who has said former President Donald Trump encouraged him to run for governor in 2022, played a role in backing the Wake TSI review .

"It is a darn shame they are being made an example of," he said Friday. "And we will have their backs."

President Joe Biden won the state of Pennsylvania by more than 81,000 votes. The state's Democratic governor, Tom Wolf, has signaled his readiness to fight Mastriano's investigation.

"This illogical, partisan effort to overturn the 2020 election will only lead to the decertification of voting machines that are compromised, additional expense for counties, and more partisanship that only seeks to undermine Pennsylvania’s elections. The administration will stand up to any attempt to disrupt our electoral process and undermine our elections," said Wolf spokeswoman Elizabeth Rementer.

The only fraud is Trump. Calling and bribing officials in Georgia and now AZ and God knows where else to "find" him enough votes to win. He doesn't care about America and he certainly doesn't care about the hard working Americans who are sending him their money. How sad. He is the reason our country is getting laughed at.

that is ridiculous. there was no voter fraud. it is a big like by a big baby 🍼🍼🍼 who is a child because he can't stand the fact that he lost a fair election

If the Left didn't do anything wrong, they shouldn't have a problem having the Forensic Audit. With all the screaming and whining and thrashing around the Left is doing, it makes one more and more sure that the Left is guilty of election theft and more. Time to bring the corruption into the light of day .

Despite the Arizona audit results, Pennsylvania Republicans are doubling down on election review.

Despite the Arizona audit results, Pennsylvania Republicans are doubling down on election review. After an audit endorsed by former President Donald Trump in Arizona’s Maricopa County verified President Joe Biden’s victory, Pennsylvania Republicans have stepped up their investigation into the 2020 presidential election. Following substantial pressure from Trump and supporters...
ARIZONA STATE・1 DAY AGO
Washington Examiner

The draft report of the Arizona election audit of Maricopa County showed, once again, that former President Donald Trump lost the state. In a logical world, Republicans would quit listening to the confirmed loser as he continues to complain about his loss. A draft report of the findings shared with...
PRESIDENTIAL ELECTION・2 DAYS AGO
WashingtonExaminer

PHILADELPHIA — Democrats in the Pennsylvania Senate sued their Republican colleagues Friday evening to block them from subpoenaing voter records as part of a review of the 2020 election. The lawsuit argues that the Republican effort unconstitutionally tramples on the separation of powers by stepping on the courts’ power to...
PENNSYLVANIA STATE・8 DAYS AGO
wdac.com

HARRISBURG (AP) – PA Senate Republicans pursuing a “forensic investigation” of last year’s election say they will subpoena records that detail who voted, including their driver’s license number and the last four digits of their Social Security number, and by what method they voted. Senate Republicans have scheduled a meeting today of the Senate Intergovernmental Operations Committee to issue subpoenas to the Wolf Administration. In addition to records on who voted, Republicans also want records of communication between the administration and counties. Critics are calling the investigation “a fruitless search for fraud.”
HARRISBURG, PA・11 DAYS AGO
Spotlight PA

Pa. GOP lawmakers to subpoena personal information on every voter as part of controversial 2020 election audit

HARRISBURG — Republican lawmakers in the Capitol are pushing to collect personal information on every registered Pennsylvania voter, as well as a trove of communications between state and county election officials, as part of a controversial inquiry into the 2020 presidential election. The GOP lawmakers have crafted a sweeping subpoena,...
PENNSYLVANIA STATE・12 DAYS AGO
MSNBC

Pennsylvania AG: Republicans are ‘willing to sell out 245+ years of American history’ for a Big Lie

We may have gotten the “results” from the fraudulent audit in Arizona, but that isn’t stopping states like Pennsylvania from expanding on the Big Lie and trying their hand at an illegitimate election turnover of their own. Pennsylvania Attorney General Josh Shapiro joins Ali Velshi to explain why he’s suing the Republicans spearheading the effort and why what they’re doing “confirms the sham.”Sept. 26, 2021.
PENNSYLVANIA STATE・13 HOURS AGO

A partisan, Republican-instigated review of the 2020 election result in Arizona failed to turn up any evidence of widespread fraud, a major blow to Donald Trump and other conspiracy theorists who celebrated the effort. The investigation, which lasted several months, confirmed that Joe Biden did indeed beat Trump in Maricopa...
PRESIDENTIAL ELECTION・2 DAYS AGO
WashingtonExaminer

By: KDKA-TV News Staff HARRISBURG, Pa. (KDKA) — The office of Pennsylvania Attorney General Josh Shapiro has filed a brief in Harrisburg over the mask debate in schools. Shapiro says in the brief that Acting Secretary of Health Alison Beam does have the power to mandate masks. It is in response to a lawsuit that claims she does not. The lead plaintiff is State Senate President Pro Tempore Jake Corman. He said Beam needs to follow regulatory laws on school masks, but Shapiro said she already has that power. A judge in Commonwealth Courts will decide soon.
PENNSYLVANIA STATE・3 DAYS AGO

For most American voters, secretary of state — at the state level, not the cabinet secretary who leads the U.S. State Department — is probably a fairly obscure government office. In much of the country, these officials work behind the scenes on unglamorous tasks such as election administration, and few reach the household-name level.
PRESIDENTIAL ELECTION・3 DAYS AGO
WashingtonExaminer

The Biden administration said on Monday that it “strongly supports” a bill the House will consider this week that would block many state-level abortion restrictions.
POTUS・6 DAYS AGO
12news.com

PHOENIX — As details about the Republican-led review into Maricopa County's 2020 election results begin trickling in, Arizona's elected leaders have begun to offer their thoughts on the months-long audit. Arizona Senate President Karen Fann and her audit team presented their final findings Friday afternoon but some details about their...
MARICOPA COUNTY, AZ・2 DAYS AGO
azmirror.com

The Arizona Senate will release its long-awaited and repeatedly delayed election “audit” report to the public on Sept. 24. Senate President Karen Fann and Senate Judiciary Committee Chairman Warren Petersen, who jointly issued the subpoenas that initiated the review of the 2020 general election in Maricopa County, will receive the report on the Senate floor at 1 p.m. that day, which will be followed by a hearing about the findings.
MARICOPA COUNTY, AZ・10 DAYS AGO

The House panel probing the Capitol attack is readying a wave of subpoenas and already getting results from its document requests.
DALLAS, TX・3 DAYS AGO
Daily Montanan

WASHINGTON — Congressional Democrats on Friday requested that the company behind a months-long review of Arizona’s election results appear at a hearing next month, after officials from Cyber Ninjas refused to cooperate with document requests from the U.S. House Oversight and Reform Committee. Top Democrats on that panel, Reps. Carolyn Maloney of New York and Jamie […] The post U.S. House oversight panel seeks testimony from company conducting Arizona election ‘audit’ appeared first on Daily Montanan.
ARIZONA STATE・1 DAY AGO
POLITICO

After vowing to tangle with the former president if necessary to nominate electable GOP candidates, the Senate minority leader is tacitly blessing many Trump endorsements.
NFL・2 DAYS AGO