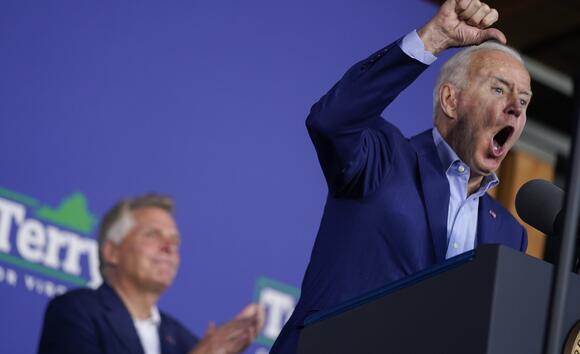 President Joe Biden brushed off hecklers on Friday while speaking at a campaign event in Virginia for Terry McAuliffe' s bid to return for a second term as governor.

A group of people started making a commotion as the president raved about the Republican Alabama Gov. Kay Ivey, who urged residents of her state to get vaccinated against COVID-19.

"Thank God the governor of Arkansas — excuse me, Alabama...," Biden said before the crowd began interrupting his speech.

"This is not a Trump rally. Let 'em holler. No one's paying attention," Biden shot back.

The president was in Arlington to support the gubernatorial campaign of McAuliffe, who previously served as Virginia's governor from 2014 to 2018. His Republican opponent is Glenn Youngkin, a businessman endorsed by former President Donald Trump.

"Terry and I share a lot in common — I ran against Donald Trump, and so is Terry," Biden said Friday. "And I whipped Donald Trump in Virginia, and so will Terry."

Biden is expected to return to his home in Delaware over the weekend while first lady Jill Biden attends the first few days of the Tokyo Olympics .

There were probably more hecklers there than people in attendance to hear Biden speak in circles and forget who he even needs to praise. That’s our “totally legitimate and most popular *resident in history.” 🤣🤣🤣🤣🤣

I don't get it, people have a lot of negative things to say about Trump. I never see any positive posts about what a good Job Biden is doing.

The parents of the illegal alien children pay the human traffickers 3 to $5000 per kid to be smuggled into country. We fly them in and put them in Foster care and then we fly mom and dad in at some later date. This is your new immigration plan courtesy of Jojo the clown. While in this country there are programs and money that these children and their families can get. That's why they're coming here get it got it good. The cartels even give the children a little risk band that tells them how much the parents paid. We got played by the human traffickers and drug cartels that's the bottom line. Impeach 46 for allowing covid positive people to come into this country helter skelter

Republicans and former President Donald Trump will be nowhere near a rally planned for Saturday at the Capitol building by those who sympathize with the hundreds of Jan. 6 rioters charged and, in some cases, held in extended custody for trespassing and other offenses.
PROTESTS・7 HOURS AGO
WashingtonExaminer

Much of the outrage over President Joe Biden’s execution of withdrawing U.S. forces from Afghanistan centered on concerns that allies and at-risk Afghans would be left in the country as the Taliban took over.
U.S. POLITICS・21 HOURS AGO
WashingtonExaminer

If Congress passes the vast reconciliation bill, voters will like what's in it. That's the Obamacare-like line some Democrats are taking as President Joe Biden steps up his campaign to pull the sprawling spending package across the finish line.
PRESIDENTIAL ELECTION・1 DAY AGO
WashingtonExaminer

The House will vote next week on a major funding bill that combines federal government spending with emergency money for Afghan refugees and states hit hard by summer flooding and hurricanes.
CONGRESS & COURTS・1 DAY AGO
WashingtonExaminer

Georgia Secretary of State Brad Raffensperger says he will not comply with expected subpoenas from the Jan. 6 commission, deeming the congressional group that is investigating the Capitol riot a "partisan sideshow."
U.S. POLITICS・1 DAY AGO

Former President Donald Trump attacked a retiring House Republican on Friday and touted his endorsement of a primary rival in the district as the cause.
POTUS・1 DAY AGO
WashingtonExaminer

'The strike was a tragic mistake': Quotes of the week

The past week was dominated by comments that may or may not have been said by Gen. Mark Milley, chairman of the Joint Chiefs of Staff. It ended with the U.S. military admitting that an airstrike they initially said took out ISIS-K terrorists in response to the Kabul suicide bombing actually killed 10 innocent people, including an aid worker and up to seven children.
MILITARY・6 HOURS AGO
WashingtonExaminer

House Speaker Nancy Pelosi lashed out at Facebook during remarks in London on Friday, accusing the social media company of enabling the Jan. 6 riot at the Capitol by failing to police extremist and conspiratorial content on its site.
INTERNET・23 HOURS AGO
WashingtonExaminer

Biden's legacy is on the line

Early mistakes can doom presidents if they're too stubborn to change.
PRESIDENTIAL ELECTION・1 DAY AGO

A week before Democratic Gov. Gavin Newsom beat back a recall election, Vice President Kamala Harris returned to California to rally voters to his side. United in victory for now, Democrats suspect Harris and Newsom will soon find themselves on a collision course.
POLITICS・3 HOURS AGO
WashingtonExaminer

The cybersecurity lawyer indicted this week by a grand jury in special counsel John Durham's investigation could end up being the "fall guy" for Hillary Clinton's 2016 campaign, warned a top House Republican.
U.S. POLITICS・16 HOURS AGO
WashingtonExaminer

The Biden administration will expel thousands of Haitian migrants who have been crossing the U.S. border illegally in Del Rio, Texas, placing them on planes heading back to Haiti, according to a new report.
IMMIGRATION・2 HOURS AGO

Congress is back to serving up the pork

Pork is being served in Washington again. Big juicy slices were given to the lobbyists with the deepest wallets and the campaign contributors who wrote the most significant reelection checks. It is the way of the swamp. It is the currency of the Washington Beltway and explains how people get so rich in politics.
WASHINGTON, DC・1 DAY AGO
WashingtonExaminer

A top U.S. general attempted to distance the United States’s August Kabul airstrike that killed 10 Afghan civilians from the “over-the-horizon” strategy the Biden administration has cited as a means of combating terrorism in the country.
MILITARY・6 HOURS AGO
WashingtonExaminer

The Florida Legislature is set to begin its decennial redistricting process next week when the Senate’s Reapportionment Committee meets Monday and the House Legislative Redistricting Committee holds hearings Wednesday and Thursday.
FLORIDA STATE・1 DAY AGO
WashingtonExaminer

Seven out of 10 Americans feel shameful over President Joe Biden’s bungled withdrawal from Afghanistan that left behind hundreds of Americans and naturalized citizens in the hands of the Taliban.
POTUS・1 DAY AGO