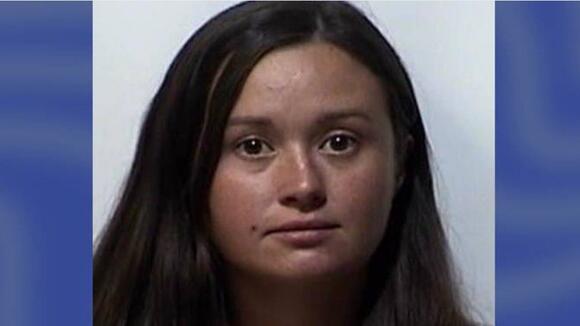 HOPKINSVILLE, Ky. — A Kentucky woman is accused of using a wooden spoon to discipline her children, authorities said.

Jessica L. Maddux, 25, of Hopkinsville, was arrested Thursday, WZTV and Kentucky New Era reported. She is charged with two counts of first-degree criminal abuse, according to WHOP.

According to a police report, Maddux is accused of using the utensil to hit the children, ages 5 and 6, on July 13 and 14, the radio station reported.

The report states that children told social workers about the incident, and photos showed bruising on their legs and buttocks, according to WHOP.

According to police, Maddux admitted she had spanked the children with the wooden spoon as a disciplinary measure, the radio station reported.

Maddux’s boyfriend, Donnie Freeman, 26, was also arrested after he allegedly hit the children with his hand, WKDZ reported.

The family of a missing Florida woman who vanished during a cross-country road trip with her fiance pleaded Thursday for information on the 22-year-old’s whereabouts. Gabrielle “Gabby” Petito’s family reported her missing Sept. 11, weeks after they last heard from her at the end of August, while she was visiting Grand Teton National Park in Wyoming. Police said Petito contacted family members regularly until then. Petito and her fiance, Brian Laundrie, had been traveling the country since July in a converted Fort Transit camper van, according to The Associated Press.
NORTH PORT, FL・5 HOURS AGO
WSOC Charlotte

HOWELL, Mich. — (AP) — A Michigan lawmaker ordered to jail in a drunken driving case is accused of taping a handcuff key to his foot. The key was discovered when state Rep. Jewell Jones, a Detroit-area Democrat, was placed in jail Tuesday for violating bond conditions, authorities said. "He...
MICHIGAN STATE・10 HOURS AGO
WSOC Charlotte

COLUMBIA, S.C. — (AP) — Instead of a suit and tie, lawyer Alex Murdaugh found himself in a jail jumpsuit Thursday in a cramped South Carolina courtroom, struggling to wipe tears from his eyes with handcuffed wrists as his lawyer detailed how his life crumbled over the past three months.
COLLETON COUNTY, SC・9 HOURS AGO
WSOC Charlotte

1 arrested, 1 at large after 4 found dead in Wisconsin cornfield

SAINT PAUL, Minn. — Authorities in Minnesota have arrested a man in connection with the deaths of four people found shot in an abandoned SUV in a Wisconsin cornfield. Police in St. Paul took 56-year-old Darren Lee McWright, also known as Darren Lee Osborne, into custody after deputies in Dunn County, Wisconsin, issued a warrant for his arrest, authorities said. His connection to the shootings was not immediately clear, although deputies confirmed he was a suspect in the case.
WISCONSIN STATE・6 HOURS AGO

ST. PETERSBURG, Fla. — (AP) — Police video shows a Florida woman who disappeared during a cross-country journey in a converted camper van had an emotional fight with her boyfriend in a Utah tourist town before she vanished. The video released by the Moab Police Department shows that an officer...
NORTH PORT, FL・5 HOURS AGO
WSOC Charlotte

LAS VEGAS — A man has been charged after police said he threw his girlfriend’s daughter from the balcony of a Las Vegas apartment. Las Vegas Metropolitan Police Department said it happened Sunday afternoon at the Boulder Pines apartment complex, KTNV reported. When police got to the scene, they found...
LAS VEGAS, NV・10 HOURS AGO
WSOC Charlotte

CHARLOTTE, N.C. — A man was killed in a motorcycle crash in northwest Charlotte Wednesday night, the Charlotte-Mecklenburg Police Department said. Officers responded to the accident at the intersection of Hovis Road and Northern Drive just before 11 p.m. When officers arrived, they found a motorcycle with front-end damage and...
CHARLOTTE, NC・8 HOURS AGO
WSOC Charlotte

CHAPEL HILL, N.C. — Chapel Hill police announced there has been an arrest almost exactly nine years after UNC sophomore Faith Hedgepeth was found beaten to death inside her apartment. A 28-year-old Durham man was arrested Thursday without incident, placed into custody and charged with first-degree murder, police said. Past...
CHAPEL HILL, NC・5 HOURS AGO

WRIGHTSVILLE BEACH, N.C. — (AP) — Police have opened an investigation after a woman was found unconscious and pulled from the surf at a North Carolina beach. Wrightsville Beach police responded to calls around 11:30 p.m. Tuesday in which callers reported seeing a woman in the surf and pulling her to shore, according to a news release.
WRIGHTSVILLE BEACH, NC・8 HOURS AGO
WSOC Charlotte

MINNEAPOLIS — (AP) — The former Minneapolis police officer convicted of murder in the death of George Floyd pleaded not guilty Thursday to violating the civil rights of a teenager in a separate case that involved a restraint similar to the one used on Floyd. Derek Chauvin was convicted earlier...
MINNEAPOLIS, NC・10 HOURS AGO
WSOC Charlotte

KENOSHA COUNTY, Wis. — A Wisconsin first grader is in critical condition after he was hit in the head by a rock that was propelled from a lawnmower at his elementary school. Alex Hook, 6, was in a medically induced coma after he was hit Friday while at recess at Riverview Elementary School in Silver Lake, the La Crosse Tribune reported.
WISCONSIN STATE・3 HOURS AGO