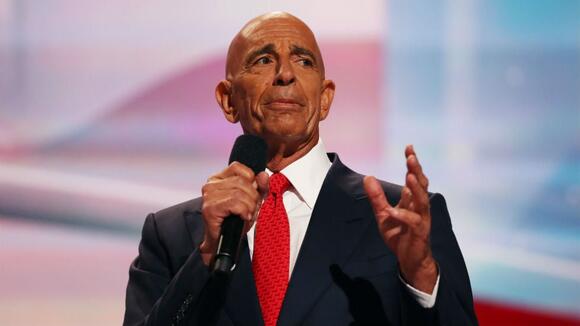 Tom Barrack, a former outside campaign adviser to former President Trump , has reached an agreement with prosecutors to get out of jail ahead of his trial on foreign lobbying charges.

The U.S. Attorney’s Office in Brooklyn, N.Y., confirmed to The Hill on Friday afternoon that Barrack would be released on a $250 million bond. The bond is reportedly secured by at least $5 million in cash.

A federal magistrate judge approved the agreement, CNN reported. The judge is also requiring Barrack to wear a GPS bracelet used to monitor his location.

Barrack must appear in court for his arraignment on Monday. The judge said he can only travel to New York and areas of southern California, and cannot transfer money outside the U.S., CNN noted.

The Hill has reached out to Barrack’s lawyers for comment.

Barrack was arrested on Tuesday and faces several charges in connection with allegations that he was working on behalf of the United Arab Emirates as an undisclosed foreign lobbyist.

Federal prosecutors say that Barrack and several other defendants sought to influence “the foreign policy positions of the campaign of a candidate in the 2016 U.S. presidential election and, subsequently, the foreign policy positions of the U.S. government in the incoming administration, as well as seeking to influence public opinion in favor of UAE interests.”

The other defendants include Matthew Grimes of Colorado, who worked for Barrack at an investment firm, and UAE citizen Rashid Sultan Rashid Al Malik Alshahhi.

Additionally, Barrack also faces charges of obstruction of justice and making false statements during an interview with federal law enforcement agents in 2019.

The UAE national has not returned to the U.S. since he left the country in 2018 following an interview with the FBI, according to CNN.

Derek Chauvin was convicted of murder in the death of George Floyd, who he also used a neck restraint against.
PUBLIC SAFETY・3 HOURS AGO
The Associated Press

SACRAMENTO, Calif. (AP) — California Gov. Gavin Newsom handily defeated a recall election that could have removed him from office, but his Democratic allies in the Legislature already are seeking changes that could make it harder to mount such a challenge in the future. Those changes could include raising the...
CALIFORNIA STATE・15 HOURS AGO
ABC News

North Korea fired two ballistic missiles toward the East Sea on Wednesday, according to South Korea’s Joint Chiefs of Staff.
MILITARY・1 DAY AGO

Gabby Petito's father Joe Petito urged the nation to focus on finding his 22-year-old daughter before shifting the focus to her fiancé, Brian Laundrie, who was named a person of interest in her disappearance. Petito said on "Fox & Friends First" Thursday the situation is "heart-wrenching," and his primary focus...
CELEBRITIES・8 HOURS AGO
The Associated Press

COLUMBIA, S.C. (AP) — Lawyer Alex Murdaugh surrendered Thursday to face insurance fraud and other charges after state police said he arranged to have himself shot in the head so that his son would get a $10 million life insurance payout. The shooter only grazed him. A defense attorney said...
HAMPTON COUNTY, SC・14 HOURS AGO
The Associated Press

WELLINGTON, New Zealand (AP) — The U.S., Britain and Australia have announced they’re forming a new security alliance that will help equip Australia with nuclear-powered submarines. The alliance will see a reshaping of relations in the Indo-Pacific region and beyond. Here’s what it might mean for various players:. THE UNITED...
MILITARY・10 HOURS AGO

(KHN) — In January — long before the first jabs of covid-19 vaccine were even available to most Americans — scientists working under Dr. Anthony Fauci at the National Institute of Allergy and Infectious Diseases were already thinking about potential booster shots. A month later, they organized an international group...
PUBLIC HEALTH・4 HOURS AGO
ABC News