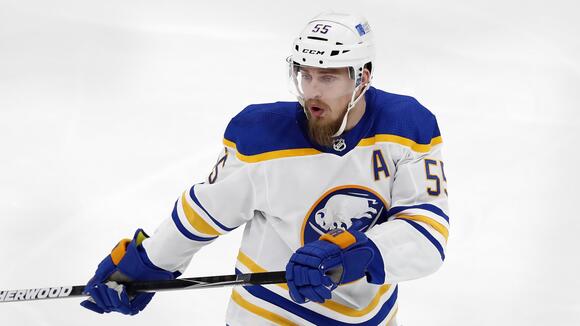 The Philadelphia Flyers continued to aggressively reshape their defense corps, acquiring defenseman Rasmus Ristolainen from the Buffalo Sabres on Friday in a package that included a first-round pick. In exchange for the 26-year-old defenseman, the Flyers sent the 14th overall pick in Friday night's NHL draft, their second-round pick in 2023 and defenseman Robert Hagg to the Sabres. Ristolainen has played all eight years of his NHL career with the Sabres, who selected him 8th overall in 2013. He has 245 points in 542 career games. Last season, he had four goals and 14 assists in 49 games, averaging 22 minutes and 17 seconds in ice time per game. Hagg, 26, played five years with the Flyers. He had five points in 34 games last season, averaging 15:40 in average ice time. The Sabres had been seeking a trade for Ristolainen, who has one more year on his contract with a $5.4 million cap hit before he hits unrestricted free agency. The asking price had been a first-round pick and other assets. Buffalo now has seven picks in the first 100 selections in this weekend's NHL draft, including two first-rounders: Picking first overall and then taking the 13th player in the draft, as the Arizona Coyotes have to forfeit pick No. 11 and the Sabres now own the 14th pick. The trade marks the third transaction general manager Chuck Fletcher has made in less than a week involving his blueline. The Flyers acquired Ryan Ellis from the Nashville Predators for center Nolan Patrick and defenseman Philippe Myers; and traded defenseman Shayne Gostisbehere to the Arizona Coyotes with two draft picks in a salary dump.

The 2021-22 NHL season is coming and it’s time to take a look at all 32 teams. Over the next month we’ll be examining best- and worst-case scenarios, looking at the biggest questions, breakout candidates, and more for each franchise. Today, we preview the Buffalo Sabres. 2020-21 Season Review. •...
NHL・8 DAYS AGO
chatsports.com

The Top 25 Under 25 is a collaboration by members of the Die By The Blade community. It was a combination of six staff writers and over 485 fans that ranked players under the age of 25 as of August 10, 2021. Each participant used their own metric of current ability and production to rank each player.
NHL・13 DAYS AGO
chatsports.com

The Top 25 Under 25 is a collaboration by members of the Die By The Blade community. It was a combination of six staff writers and over 485 fans that ranked players under the age of 25 as of August 10, 2021. Each participant used their own metric of current ability and production to rank each player.
NHL・9 DAYS AGO
phillyhockeynow.com

Flyers newcomers have arrived in Philadelphia & are excited to get started

Philadelphia Flyers Training Camp is still a few weeks away, but that hasn’t stopped the players from getting to work. Several Flyers players have been spotted at the Flyers Skate Zone in Voorhees, NJ, including a few of the newcomers. The Flyers have a handful of new faces in Orange...
NHL・11 DAYS AGO

For a franchise that has failed to qualify for the playoffs for a decade, and has had 14 first-round draft picks in that time, one would think this would be a team loaded on their main roster and a flush pipeline on the cusp of a dynasty run. The reality...
NHL・6 DAYS AGO
Philadelphia Sports Nation

Two Birds With One Stone: The Philadelphia Flyers Tackle Their Issues With Accountability and the Future

Whether you’re a fan of the moves or not, the Philadelphia Flyers had a very grand off-season. Outside of the 2019 off-season, when the Flyers acquired Kevin Hayes, Matt Niskanen, Justin Braun, and then extended Ivan Provorov and Travis Konecny to lengthy extensions, the Flyers have had underwhelming and mundane summers. They were either rebuilding or standing pat under Ron Hextall and last year’s off-season Chuck Fletcher surprisingly didn’t make any moves other than signing Erik Gustafsson.
NHL・14 DAYS AGO
prohockeyrumors.com

The Buffalo Sabres will be over the NHL’s salary cap floor by the start of the season, that much is obvious. While CapFriendly currently has the club sitting $2.3MM below the $60.2MM benchmark, that is with a 22-man roster that does not include unsigned RFA defenseman Rasmus Dahlin. While the 2018 first overall pick is not quite yet proven himself worthy of the considerable long-term deals signed by other top defenseman this off-season, he will surely make more than $2.3MM AAV on his next contract.
NHL・8 DAYS AGO

Donnie and Dhali: Rick Dhaliwal on Friday: “Not saying they are going to sign him, could be a PTO situation but the #Canucks have been poking around with the Tyler Ennis camp.”. Sabres will likely need to take salary back in any Eichel trade. John Vogl of The Athletic: (mailbag)...
NHL・7 DAYS AGO
92.9 Jack FM

I know, the Buffalo Bills are what has everyone's mind occupied in Western New York right now, and for good reason...but the Buffalo Sabres will soon be back, and maybe quicker than you think. The Sabres first preseason game in just over two weeks, September 28th against the Columbus Blue...
NHL・6 DAYS AGO
NHL

Chemistry of new defensemen, Hart return to form, third-line center among unknowns. NHL.com is examining where each team stands in preparation for the 2021-22 regular season, which starts Oct. 12. Today, five questions facing the Philadelphia Flyers:. 1. How will the new defensemen fit together?. The Flyers revamped at defenseman...
NHL・8 DAYS AGO
chatsports.com

The Curious Case of the Philadelphia Flyers Abysmal Special Teams

Buffalo, N.Y. (WGR 550) – As I’ve watched the Buffalo Sabres practice on Wednesday and Thursday, I looked to see if the more highly ranked prospects dominated. So far, 2020 second round pick J-J Peterka hasn’t disappointed. Peterka has a very good scoring touch and is very shifty in what...
NHL・3 DAYS AGO
96.1 The Breeze

It’s Official: The Buffalo Sabres Are Playing an Outdoor Game This Season

The Buffalo Sabres have played two outdoor games in their history. The first was the very first Winter Classic, which was played on January 1st, 2008 against the Pittsburgh Penguins at then, Ralph Wilson Stadium. The second was on January 1st, 2018 when the Sabres played at Citi Field against the New York Rangers.
NHL・3 DAYS AGO
Buffalo News

No longer a stranger to Buffalo, J-J Peterka joins Sabres for Prospects Challenge

The city of Buffalo was a mystery to J-J Peterka. Almost a year had passed since the Sabres selected Peterka in the second round, 34th overall, when he finally stepped off a plane here on Saturday. Peterka knows this is where he wants to fulfill his dream of starring in the National Hockey League, yet his knowledge of Buffalo was limited to what he was told by the club and former Sabre Derek Roy, a teammate the previous two seasons in Munich, Germany.
NHL・4 DAYS AGO
FanSided

What happened on September 17 in the history of the New York Rangers. On this date in 1970, the New York Rangers made history in Peterborough, Ontario, becoming the first team to ever play the newest NHL team, the Buffalo Sabres. It was a preseason game and it ended in a 4-4 tie.
NHL・2 DAYS AGO
chatsports.com

While the Blueshirts’ prospects aren’t attending the Traverse City tournament this year, they’ll still get the opportunity to don the blue shirt this afternoon. The Rangers’ prospects will be squaring off with a group of prospects from the Philadelphia Flyers organization. The headline of New York’s group will be Nils Lundkvist, a 2018 first round selection that will be making his North American debut this season.
NHL・1 DAY AGO
NBC Sports

Let the (rookie) games begin. After a pair of on-ice days at Virtua Center Flyers Skate Zone, the Flyers' rookies head to Tarrytown, New York, to take on the Rangers' prospects Saturday at 3 p.m. ET. Flyers rookie camp will then conclude Sunday with a second matchup against the Rangers, this one in Voorhees, New Jersey, at 5 p.m. ET.
NHL・2 DAYS AGO