White House on unvaccinated Americans: Our role is not to 'place blame' 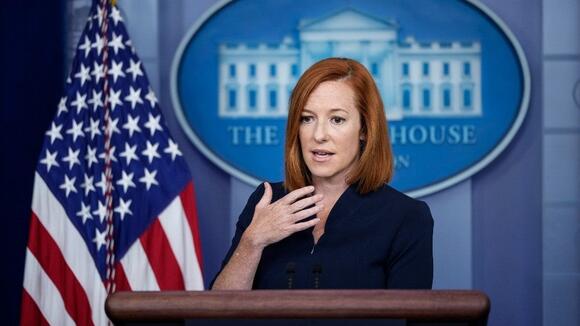 The White House on Friday said it would not place blame on unvaccinated Americans as coronavirus cases rise around the country, but press secretary Jen Psaki said the administration empathizes with the frustration of leaders in states that have lagged behind in vaccination rate.

"I don’t think our role is to place blame, but what we can do is provide accurate information to people who are not yet vaccinated about the risks they are incurring not only on themselves, but also the people around them," Psaki said.

Psaki said it's not the role of the federal government to encourage vaccine mandates as some states have seen vaccination rates stagnate. Instead, the administration sees its role as distributing vaccines and disseminating accurate information about the shot.

"I will say, we understand her frustration, and we understand the frustration of leaders out there and public voices who are trying to say the right thing, advocate for the efficacy of the [vaccine], save people in their communities," Psaki said.

The White House has in recent weeks faced repeated questions about whether it can or should take a more hands-on role in encouraging Americans to get the coronavirus vaccine, particularly as the number of cases has roughly tripled over the past two weeks.

But the administration has steered clear of any involvement with vaccine mandates, instead deferring to private companies and institutions to set their own requirements for the shot if they choose.

Roughly 66 percent of Americans ages 12 and up have gotten at least one dose of the vaccine, according to New York Times data.

Ivey, asked in Birmingham what more could be done to encourage residents to get the shot, appeared exasperated.

"Almost 100 percent of the new hospitalizations are with unvaccinated folks. And the deaths are certainly occurring with the unvaccinated folks,” she told reporters. "These folks are choosing a horrible lifestyle of self-inflicted pain."

Stop Calling It a ‘Pandemic of the Unvaccinated’

“Your refusal has cost all of us,” President Joe Biden said to unvaccinated people last week, as he announced a new COVID-vaccine mandate for all workers at private companies with more than 100 employees. The vaccinated, he said, are angry and frustrated with the nearly 80 million people who still haven’t received a vaccine, and their patience “is wearing thin.”
PUBLIC HEALTH・21 HOURS AGO
Fox News

Fox News contributor Joe Concha reacted Tuesday to the White House abruptly cutting the feed of President Biden's briefing on wildfires with federal and state officials in Boise, Idaho. The video ended as Biden began to ask a question to officials at the event. JOE CONCHA: If this was a...
BOISE, ID・2 DAYS AGO
Reason.com

President Joe Biden's national vaccine mandate sparked a lot of debate and set political seismometers jumping even more frantically than usual. Most commentary has focused on two issues: Is forcing people to take vaccines a good idea, and will the courts sign off on the government's authority to do so? Those are great discussions to have, though anything involving "forcing people" should be a non-starter by default. But another important question is raised by the president's gambit to displace the Afghanistan fiasco from the headlines: How, in the United States, can one guy just impose his preferred policies, whether they're good, bad, or indifferent?
U.S. POLITICS・3 DAYS AGO
Washington Post

Two weeks after the Biden administration’s troubled withdrawal of the U.S. military from Afghanistan, a powerful Senate Republican finally had Secretary of State Antony Blinken in the hot seat Tuesday to grill him on what went so wrong. But instead of asking about an end of the war that a...
CONGRESS & COURTS・2 DAYS AGO

The Biden Administration is seeking to implement multiple federal mandates requiring U.S. citizens to be vaccinated against COVID-19 or risk losing their jobs, while at the same time providing protection for the freedom and bodily autonomy of immigrants “more than for American citizens,” Arizona Attorney General Mark Brnovich alleges in a federal lawsuit he filed Tuesday.
CONGRESS & COURTS・2 DAYS AGO
POLITICO

The White House press secretary added that “no one’s looking to have a battle here.”. The White House on Thursday defended its move to purge a slew of Trump allies and former administration officials from their roles on various military advisory boards — invoking former President Donald Trump’s incitement of the Jan. 6 insurrection as a reason why those appointees should no longer serve on the government panels.
POTUS・7 DAYS AGO
Fox News

The White House said the Taliban have been "businesslike and professional" in their dealings on allowing Americans to leave Afghanistan, calling the dialogue "cooperative" and casting it as a "positive first step." The U.S. government said it facilitated the safe evacuation of American citizens and lawful permanent residents from Afghanistan...
POTUS・7 DAYS AGO
news-graphic.com

Biden to the unvaccinated: 'Our patience is wearing thin'

President Joe Biden shared a message to unvaccinated Americans as the nation continues to fight rising coronavirus cases and deaths. He implored them to get the vaccine, noting "we've been patient, but our patience is wearing thin."
U.S. POLITICS・7 DAYS AGO

White House says there are 'active' ISIS threats in Afghanistan, as 'closer to 100' Americans remain

The White House said Thursday that there continue to be "active" threats from ISIS-K in Afghanistan, and that officials are in "close touch" with the roughly 100 American citizens remaining in the country following the U.S. military withdrawal. During a press briefing Thursday, press secretary Jen Psaki said that the...
POTUS・14 DAYS AGO
Newsweek

Biden's response to NBC's Peter Alexander's question was a smirk, but as the audio cut off, Biden tells him, "You'll be the first person I call."
POTUS・22 DAYS AGO
WashingtonExaminer

The White House did not directly answer questions from reporters on Wednesday about the casualties resulting from President Joe Biden's Afghan drone strike.
POTUS・1 DAY AGO
Newsweek

What Happens if You Don't Get Vaccinated Under Biden's New Mandate?

Millions of American workers will have to be vaccinated against COVID-19 if they aren't already after President Joe Biden's actions this week.
POTUS・6 DAYS AGO

As President Biden said Sept. 9 when announcing his ambitious, multistep “Path Out of the Pandemic” plan: “Many of us are frustrated with the nearly 80 million Americans who are still not vaccinated, even though the vaccine is safe, effective and free.”. Speaking as someone who hasn’t hugged her mom...
U.S. POLITICS・21 HOURS AGO
Axios

About 100 Americans are still in Afghanistan following the Aug. 31 full U.S. troop withdrawal from the country, White House Chief of Staff Ron Klain said on CNN’s "State of the Union" on Sunday. State of play: Klain said U.S. officials had been in regular contact with all of those...
POTUS・11 DAYS AGO
New York Post

Sen. Ted Cruz confronted Secretary of State Antony Blinken about child brides being brought to the United States from Afghanistan amid the chaotic withdrawal by the Biden administration, demanding to know what guidance the State Department has been provided to rescue minors among the evacuees that have been victims of sexual abuse.
CONGRESS & COURTS・2 DAYS AGO

No, the White House did not ‘silence’ Biden with a mute ‘button’

“It’s been widely reported that somebody has the ability to push the button and cut off his sound and stop him from speaking. Who is that person?”. — Sen. James E. Risch (R-Idaho), questioning Secretary of State Antony Blinken during a hearing on Afghanistan, Sept. 14. Risch, the senior Republican...
U.S. POLITICS・2 DAYS AGO
Fox News

Kamala Harris questioned after announcing steps for ‘protecting the vaccinated’: ‘Doesn’t the vax do that?’

Vice President Kamala Harris raised eyebrows on Sunday with her tweet urging Americans to help protect already vaccinated people in order to end the COVID-19 pandemic. "By vaccinating the unvaccinated, increasing our testing and masking, and protecting the vaccinated, we can end this pandemic. That’s exactly what we are committed to doing," Harris tweeted.
U.S. POLITICS・3 DAYS AGO
Fox News

Trump says terrorists 'absolutely' airlifted from Afghanistan in US evacuation

EXCLUSIVE – Former President Donald Trump, in an exclusive interview with Fox News Digital, suggested that terrorists "absolutely" were airlifted from Afghanistan as part of the U.S. evacuation effort from Kabul last month, questioning the Biden administration's vetting process. The former president, during the interview, called the Biden administration’s effort...
POTUS・2 DAYS AGO
WashingtonExaminer

Spicer to Biden: Shove it, demand to quit Navy board is illegal

Claiming President Joe Biden is illegally politicizing U.S. military academies, former Trump White House press secretary Sean Spicer told the White House he would not resign as requested from a Navy board before his three-year term is up.
POTUS・3 DAYS AGO