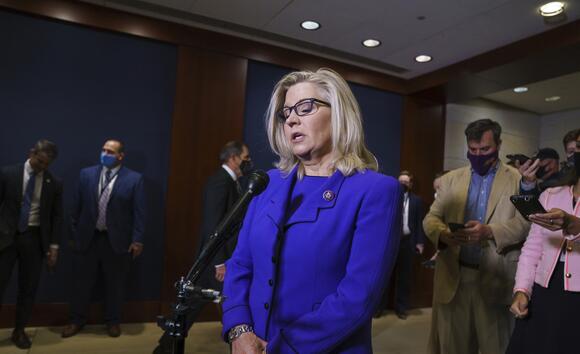 A top Republican-aligned group is out with an ad comparing Rep. Liz Cheney to Hillary Clinton, highlighting the Wyoming congresswoman's willingness to accept an appointment by House Democrats on a commission to investigate the Jan. 6 Capitol riot.

The 30-second attack ad by Club for Growth Action, the political arm of Club for Growth, a small-government advocacy group, will play in Cheney’s statewide district. The ad begins with photos of Clinton, the 2016 Democratic presidential nominee, former secretary of state, senator from New York, and first lady.

The ad references House Speaker Nancy Pelosi, a California Democrat who has appointed Cheney to one of eight Democratic slots on the committee. After Pelosi rejected two of the five GOP picks for the panel, House Minority Leader Kevin McCarthy pulled all five choices. That effectively leaves Liz Cheney, the daughter of former Vice President Dick Cheney, as the only Republican on the Jan. 6 select committee.

"Remember? She benefited from a famous political last name," the ad narrator said. "She sided with Nancy Pelosi and attacked President Trump when he was in office. She supported impeachment, and she continues to attack President Trump today."

The voiceover asks again, "Hillary Clinton? No, Liz Cheney." At this point, the photo of Clinton morphs into the Wyoming Republican. The ad concludes, "Liz Cheney is wrong about Trump, and she’s wrong for Wyoming in Congress."

A Cheney spokesman repudiated the ad, saying in a statement, "Anyone who questions Liz Cheney’s conservative credentials is ignorant or lying.”

However, the Club for Growth Foundation Scorecard, which is based on voting records on issues of “economic liberty,” gave Cheney a 64% lifetime rating, "which leaves her tied for 120th in the House."

The ad, first released on Wednesday by the fiscal conservative political action committee, comes on the heels of Pelosi appointing Cheney to the Jan. 6 select committee, which Cheney accepted, along with seven Democrats, including Rep. Bennie Thompson of Mississippi, who will lead the panel. The select committee will investigate the circumstances surrounding the Jan. 6 attack, when supporters of President Donald Trump stormed the Capitol in an attempt to block certification of Electoral College votes, making Joe Biden the next president.

House Minority Leader Kevin McCarthy attempted to appoint five members from his own conference, but Pelosi rejected two of those members: Reps. Jim Jordan of Ohio and Jim Banks of Indiana. This prompted McCarthy to pull all five of his appointments.

The Wyoming Republican supported Pelosi’s decision to deny McCarthy’s appointments, telling reporters that one of the rejected GOP-appointed members “may well be a material witness to events that led to that day, that led to Jan. 6." The other member, Banks, Cheney said, "disqualified himself by his comments in particular over the past 24 hours, demonstrating that he is not taking this seriously, that he is not dealing with the facts of this investigation but rather viewed it as a political platform.”

Cheney has a vast campaign war chest, as well as multiple primary challengers in Wyoming this cycle. She is among several anti-Trump Republicans who voted to impeach the 45th president over the Jan. 6 riot at the Capitol.

The Wyoming Republican believes that the former president encouraged his supporters to attack the Capitol to prevent the certification of the 2020 presidential election.

The Club for Growth ad will run on digital networks during prime time on NBC each night of the Olympics, as well as during the opening and closing ceremonies in the targeted market areas of Casper and Cheyenne.

"It is a loser for the USA, a terrible deal, and makes the Republicans look weak, foolish, and dumb," Trump wrote.
POTUS・23 HOURS AGO
Newsweek

Nancy Pelosi "had to speed up reconvening Congress to get the vote going before Justice Alito might have issued an injunction to stop it all," Powell said.
CONGRESS & COURTS・1 DAY AGO
Newsbug.info

NORTH CHARLESTON, S.C. — U.S. Sen. Lindsey Graham has made a new bet on how he thinks history will remember President Donald Trump and the violent mob that ransacked the Capitol on Jan. 6 in Trump’s name and his unfounded allegations of election fraud. In an interview with The State...
CONGRESS & COURTS・23 HOURS AGO
Markets Insider

McConnell's Senate GOP is about to vote for a US default. Here's what the debt ceiling is - and why it's so dangerous.

Senate Republicans are on the verge of blocking a debt limit hike. The stakes are incredibly high, but lawmakers are at an impasse.
PRESIDENTIAL ELECTION・1 DAY AGO

Rep. Liz Cheney says she was wrong to oppose gay marriage in the past, a stand that once split her family.Cheney, R-Wyo., a fierce critic of fellow Republican Donald Trump also tells CBS News' “60 Minutes” that she views her reelection campaign as the most important House race in the nation as forces aligned with the former president try to unseat her. She voted to impeach Trump over his role in the Jan. 6 riot at the U.S. Capitol.In the interview aired Sunday night, Cheney said she had little affection for President Joe Biden who she believes...
SOCIETY・1 DAY AGO
Newsweek

In 2015, Trump attacked the late Senator John McCain, a former prisoner of war, by saying, "I like people who weren't captured."
PRESIDENTIAL ELECTION・2 DAYS AGO
mediaite.com

Liz Cheney Says She ‘Absolutely’ Can Win Reelection: ‘A Vote Against Me’ Is A Vote For ‘Somebody Who’s Put Allegiance to Trump Above Allegiance to the Constitution’

Rep. Liz Cheney (R-WY), who was ousted from House leadership over her criticism of former President Donald Trump, said she could “absolutely” win reelection during a Sunday interview with 60 Minutes. In polling from July, only 23% of Wyoming Republicans said they would vote for her — and another 53%...
PRESIDENTIAL ELECTION・1 DAY AGO
Business Insider

Cheney denounced same-sex marriage in 2013 and was condemned by her sister, who was married to a woman.
CONGRESS & COURTS・1 DAY AGO

Liz Cheney on being a Republican while opposing Donald Trump

Liz Cheney tells Lesley Stahl about running for re-election as an anti-Trump Republican in Wyoming, as her own party there has called for her resignation, and joining the House Select committee investigating the January 6 Capitol riot.
POTUS・1 DAY AGO
CBS News

Liz Cheney tells Lesley Stahl about running for re-election as an anti-Trump Republican in Wyoming, where her own party there has called for her resignation, and joining the House Select committee investigating the January 6 Capitol riot.
POTUS・1 DAY AGO
WashingtonExaminer

Liz Cheney headed to New Hampshire amid feud with Trump

Rep. Liz Cheney of Wyoming is headed to New Hampshire as she positions herself as a leading Republican opponent to former President Donald Trump.
PRESIDENTIAL ELECTION・7 HOURS AGO

Biden in a bind on border: 'The coalition that elected him will collapse'

WASHINGTON — Democratic Rep. Ayanna Pressley, of Massachusetts, called the Border Patrol “egregious and white supremacist.” Rep. Maxine Waters, D-Calif., said it was “worse than what we witnessed in slavery.”. The pair spent years targeting similar criticism at former President Donald Trump for his handling of the border. But this...
PRESIDENTIAL ELECTION・1 DAY AGO
MarketWatch

President Joe Biden is expected to meet Tuesday with two key Democratic senators as the party works to narrow Biden's $3.5 trillion legislative package, the Associated Press reports. The AP said Biden is expected to meet separately with Sens. Joe Manchin of West Virginia and Kyrsten Sinema of Arizona -- two centrists who have balked at the package's price tag. Manchin has previously proposed spending of as much as $1.5 trillion. Meanwhile, House Speaker Nancy Pelosi told Democrats Monday that passage of a separate infrastructure bill can't wait for the larger package since it's not yet ready, according to NBC News.
PRESIDENTIAL ELECTION・5 HOURS AGO
Newsweek

"So far, we have not seen any negotiation back from the Senate," said Rep. Pramila Jayapal, chair of the congressional progressive caucus, as she acknowledged that the bill must be trimmed to reach a consensus.
CONGRESS & COURTS・1 DAY AGO
MarketWatch

As Democrats scramble to get a debt-limit increase or suspension through Congress, they are already looking ahead at options for the next time action is needed, House Speaker Nancy Pelosi said Tuesday.
CONGRESS & COURTS・1 HOUR AGO

“I think a lot of us want to make sure we have an assurance that, in fact, there’s going to be a reconciliation bill," said Rep. Jim McGovern.
CONGRESS & COURTS・2 HOURS AGO
AFP

Eight months after Joe Biden swept to victory on a pledge to make America more livable, equitable and environmentally-friendly, a Democratic civil war is threatening to shred his domestic agenda. Internal squabbles are nothing new in Washington but twin proposals to spend up to $5 trillion rebuilding the post-Covid economy have laid bare the extent of the eyewatering divisions confounding the party in Congress. So profound are the disagreements between the party's left and centrist factions that they could easily leave Biden with no legacy to speak of and torpedo Democrats' chances in next year's midterm elections. By Friday morning, it is possible that Biden's bipartisan $1.2 trillion infrastructure bill will have failed, imperiling a larger, $3.5 trillion "Build Back Better" package of investments in child care, education, family leave and climate mitigation.
U.S. POLITICS・1 HOUR AGO
Newsweek

"Politics now are so often about people, not the policies that impact lives directly," Devos said.
PRESIDENTIAL ELECTION・2 DAYS AGO
USA TODAY

OnPolitics: Congressional Democrats are up against the clock

Besides trying to finish work on both infrastructure bills, lawmakers face the possibility of a government shutdown this week.
CONGRESS & COURTS・1 DAY AGO