Source: OU/Texas Exit is Imminent; Expected to Be Official Early Next Week 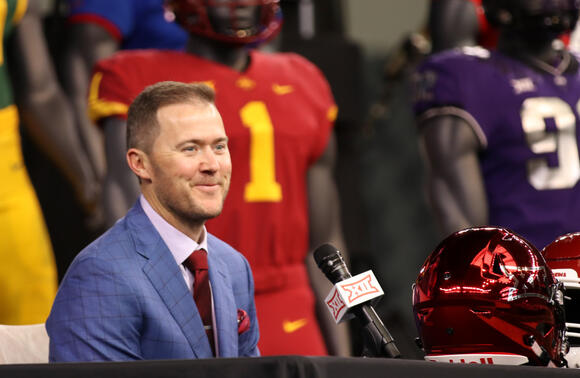 It’s happening. The future has arrived — and college athletics will never look the same.

An OU source confirmed to SI Sooners on Friday that Oklahoma and Texas are indeed eager to leave the Big 12 Conference and are actively seeking membership in the Southeastern Conference.

The source said that could begin happening on Monday.

Big 12 presidents and athletic directors met via conference call on Thursday evening, and representatives of OU and UT declined to attend, the source said, because the league’s two power brokers have already decided to leave the Big 12 and will formally begin the process next week.

After the meeting, the Big 12 released a bullet-point statement.

Kirk Bohls of the Austin American-Statesman reported Friday that a prominent Big 12 source told him the move to the SEC is “almost done.” A source confirmed to SI Sooners that their exit was close.

Bohls and Stadium college football insider Brett McMurphy both reported that OU and Texas have actually been working on an exit strategy for a while now — up to 6-7 months.

McMurphy reported a source told him that OU and Texas “have been in lockstep the whole time” and had previously decided they were leaving the Big 12, but “it was just figuring out where.”

Bohls reported his source told him that while OU and Texas have been brokering with the SEC, leadership at Texas A&M was “left out of the discussions and wasn’t told about it.” Aggies athletic director Ross Bjork told reporters at SEC Media Days this week that A&M did not want to be in a conference with Texas again.

Formal proceedings that will open the door for Oklahoma and Texas to leave are expected to begin as soon as Monday, a source told SI Sooners.

Multiple outlets have reported and an SI Sooners source confirmed that the Sooners and Longhorns will tell the Big 12 next week that they do not intend to accept the league’s offer to extend the binding grant of media rights for five years, which was reported Thursday by Brian Davis of the Austin American-Statesman. After that, they will petition the SEC for membership.

However, CBS Sports’ Dennis Dodd reported Friday that it could happen within “24-48 hours.”

Their timeline for OU and UT joining the SEC is murky, but will likely include negotiations, legal wrangling over contracts and buyouts, a source said. It could happen as soon as 2022 or as late as 2025 (when the current TV contracts and grant of rights expire), although somewhere in the middle is more likely, a source said.

Chip Brown of Horns247, also citing an unnamed source, reported that OU and Texas “could move quickly” also said both schools a prepared to wait out the full term of the current grant of rights if necessary.

While OU and Texas have orchestrated their landing spot, the future is dark for the rest of the Big 12.

TCU insider Jeremy Clark reported Friday that TCU, Baylor and Texas Tech have already reached out to the Pac-12.

It’s also been reported on Twitter that Kansas has reached out to the Big Ten, although that hasn't been reported by any traditional media outlets.

Oklahoma State issued a statement Wednesday saying the school would be “gravely disappointed” if OU and Texas leave, but OSU has been otherwise silent.

SI's Ross Dellinger reported Friday that SEC commissioner Greg Sankey has kept SEC presidents informed, but said the league can now "immediately take action after UT/OU notify the Big 12 of (their) exit and summit an application for membership."

OU and Texas would both need 11 of 14 votes, and Dellinger said only Texas A&M seems opposed to the move.

Times are tough at the Florida State football program right now. The Seminoles fell to 0-3 on the season with Saturday’s loss to Wake Forest. Florida State opened the season with a close loss to Notre Dame, appearing to show some improvement. However, Mike Norvell’s team was upset by Jacksonville State in Week 2 and then lost to the Demon Deacons in Week 3.
FLORIDA STATE・2 DAYS AGO
WolverineDigest

Is it fair to say that the Oct. 30 matchup in East Lansing between No. 19 Michigan and No. 20 Michigan State is starting to look like a pretty big deal?. The Wolverines and the Spartans are both 3-0 through the first three weeks of the 2021 season, with both programs showcasing a rushing attack that looks nearly unstoppable.
MICHIGAN STATE・3 DAYS AGO
The Spun

Alabama head coach Nick Saban had unfortunate news to share surrounding linebacker Christopher Allen on Monday. Allen left Alabama’s season opener versus Miami last Saturday with an injury. The Crimson Tide linebacker went down with an injury after strip-sacking Miami’s D’Eriq King in the second quarter. He was eventually carted off the field and taken to the locker room.
ALABAMA STATE・16 DAYS AGO
The Spun

On Saturday morning, ESPN’s College GameDay kicked off from Ames, Iowa ahead of a huge matchup between No. 9 Iowa State and No. 10 Iowa. While that contest will be the primary focus for the show a little later, Kirk Herbstreit and company also took a look at other games going on. During the show, the conversation eventually shifted to LSU.
AMES, IA・11 DAYS AGO

Hello USC, this is Urban Meyer. About that job opening you have right now, how soon do you need me? Tonight is fine. Send the jet. College football fans were abuzz at the news of USC firing Clay Helton as their head football coach, Monday, two days after the Trojans lost to Stanford. And many pondered if Meyer, who has coached all of one game with the Jacksonville Jaguars, would be ready to ditch his brief NFL experiment and head west.
NFL・9 DAYS AGO
saturdaydownsouth.com

If Nebraska head coach Scott Frost wanted to show that he was still the man for the job at his alma mater, then the 2021 season didn’t get off to a great start. The former Cornhuskers quarterback returned to Lincoln ahead of the 2018 season as the university sought to turn the page from the Mike Riley era. So far, it hasn’t been a good return on investment as Frost has struggled to a 12-21 record, including a 9-18 mark in the Big Ten.
COLLEGE SPORTS・23 DAYS AGO
On3.com

Oklahoma Sooners athletic director Joe Castiglione has issued an apology to fans who attended Saturday’s game against Nebraska. In a Twitter post Sunday, Castiglione acknowledged the concession operations were not up to Sooner standards. “We want to acknowledge the complaints we have received about concession operations from fans attending yesterday’s...
NEBRASKA STATE・3 DAYS AGO
FanSided

College football upset picks have been prosperous early with ranked teams going down, but which teams are now in danger with Oklahoma in Week 4?. Top 25 teams have been getting upset at a seemingly breakneck pace early in the 2021 college football season and that trend didn’t let up a week ago. Not only did Michigan State wax Miami, West Virginia topple Virginia Tech and Fresno State get UCLA but we also saw Ohio State, Clemson, Coastal Carolina and Oklahoma play much tighter games than expected.
OKLAHOMA STATE・10 HOURS AGO

Tennessee will have a new starting QB Saturday, per report

Tennessee has reportedly settled in on its starting quarterback as the Volunteers take on Tennessee Tech at Neyland Stadium on Saturday. According to GoVols247 and 247Sports’ Patrick Brown, Hendon Hooker will start behind center against the Golden Eagles. Hooker will play in place of Joe Milton, who suffered a lower-body injury in the Vols’ loss to Pittsburgh on Sept. 11.
TENNESSEE STATE・4 DAYS AGO
The Spun

The Charleston Southern football program is dealing with the tragic death of freshman defensive lineman Lorvens Florestal, who was shot and killed early this morning. According to a release from CSU, Florestal was the victim of a random act of violence. The Delray Beach (Fla.) native was an innocent bystander, according to witnesses.
COLLEGE SPORTS・24 DAYS AGO
Idaho's Newschannel 7

How to watch Boise State vs. Utah State on Saturday

On Saturday, Sept. 25, Bronco Nation will have an early morning when Boise State takes on Utah State in Logan, UT.
UTAH STATE・2 DAYS AGO
Tuscaloosa News

At the end of Saturday morning's "SEC Nation" show from Gainesville, Tim Tebow made a bold prediction. Tebow picked a Florida Gators win against Alabama football. But he went further than just saying Florida is going to win. He said, "Alabama is coming to get a whoopin'." The Alabama vs....
ALABAMA STATE・4 DAYS AGO

You never know what you’re going to get when Mississippi State head coach Mike Leach meets with the media. Leach is known for his diatribes about anything from the woes of social media to the possible existence of Big Foot. Sometimes, between all the random talk about pirates and aliens,...
MISSISSIPPI STATE・1 DAY AGO
Sports Illustrated

Check out odds, insights and more in our betting preview for the Michigan State Spartans vs. Nebraska Cornhuskers college football matchup on September 25, 2021.
MICHIGAN STATE・2 DAYS AGO
The Spun

Over the weekend, the Alabama Crimson Tide kept its undefeated season alive with a close 31-29 win over the Florida Gators. Nick Saban and company survived after Florida’s late two-point conversion – which would have tied the game – failed. Elsewhere in the SEC, the Georgia Bulldogs routed the South Carolina Gamecocks by a final score of 40-13.
ALABAMA STATE・16 HOURS AGO
Sports Illustrated

Check out odds, insights and more in our betting preview for the Georgia Bulldogs vs. Vanderbilt Commodores college football matchup on September 25, 2021.
GEORGIA STATE・2 DAYS AGO

At 1:30 p.m. MT Monday, Boise State head coach Andy Avalos and some of his coaching staff will discuss the Broncos' next game against Utah State on Saturday.
LOGAN, UT・2 DAYS AGO
104.3 WOW Country

College Football is full of coaching characters such as Mike Leach, Nick Saban, and Lane Kiffen. Arguably one of the most colorful characters in coaching is Oklahoma State Coach Mike Gundy. We all know the famous video that caught Gundy in a rage during a press conference saying something like,...
BOISE, ID・1 DAY AGO
saturdaydownsouth.com

USC’s decision to fire Clay Helton after just 2 games means some college football coaches will have distractions to deal with this season, as who will be the next Trojans’ head coach is a hot topic of conversation. SEC analyst and radio personality Paul Finebaum was recently asked on the...
COLLEGE SPORTS・15 HOURS AGO
USA TODAY

Wins on the road against top 10 opponents have pushed Oregon and Iowa near the top of the latest NCAA Re-Rank 1-130.
COLLEGE SPORTS・2 DAYS AGO