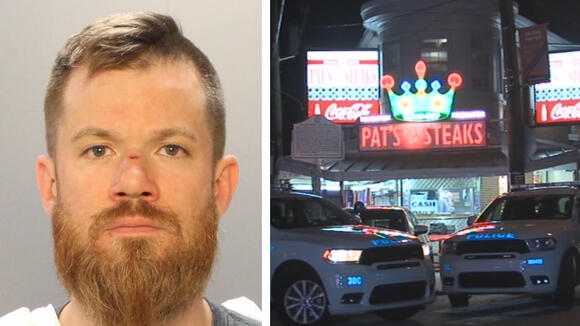 Police have identified the suspect who was arrested for a fatal shooting at Philadelphia's iconic Pat's King of Steaks. Thirty-six-year-old Paul Burkert of Doral Drive in Reading, Pa. was charged with murder for the early Thursday morning shooting. 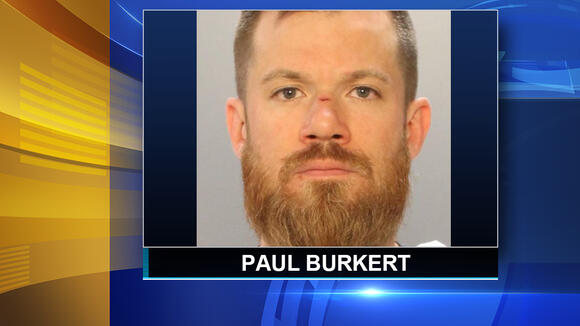 Police were called to the 1200 block of South 9th Street around 12:55 a.m. for a report of a person with a gun. That's where officers found 22-year-old David Padro, from the 2700 block of Federal Street in Camden, New Jersey, with a gunshot wound to the lower back. Officers rushed him to Jefferson University Hospital, but he was pronounced dead at 1:23 a.m. Police said Burkert and Padro were in line for food when they got into an argument over a parking spot. Investigators said about six or seven other customers were also in line waiting on cheesesteaks when the fight broke out. SEE ALSO: More shooting deaths as Philadelphia leaders address gun violence crisis Witnesses saw the suspect get into a van with a female driver. Police said those witnesses gave a detailed description of the gunman, as well as the van and its tag number. A few minutes later, authorities said the man matching the description of the shooter showed up at 5th and Market streets in Center City where he turned himself in after contacting police.

Hey I knew he was white because on the news they said a customer shot and killed a customer in line . when they talk about their own , they won't say what race their talking about, and it happens like that all of the time, so we already know what the race of the person is!!! Thank for listening...

Where are all the racist at....if this was black on black this thread will be going crazy

PHILADELPHIA (WPVI) -- A gunman who shot at police officers after opening fire on two people inside a Philadelphia home is behind bars on Thursday night. It happened around 8:15 p.m. on the 2900 block of Weikel Street in the city's Port Richmond section. Police say two shooters walked up...
PHILADELPHIA, PA・19 HOURS AGO
6abc Action News

CHESTER, Pennsylvania (WPVI) -- A 7-year-old girl who was in the passenger seat of a vehicle outside a Chester, Pennsylvania market was shot multiple times by gunfire, police say. It happened around 8:45 p.m. Thursday in the area of 9th and Tilghman streets. Arriving police officers were told shots were...
CHESTER, PA・2 HOURS AGO
6abc Action News

Exclusive video obtained by Action News shows the moment 6-year-old Honesty was hit by a driver who was traveling the wrong way on East Wishart Street.
PHILADELPHIA, PA・17 HOURS AGO
6abc Action News

Five people in the group were struck and wounded by the gunfire. One of the victims was struck multiple times in the body and died of his wounds.
PHILADELPHIA, PA・1 DAY AGO

Three Sharon Hill police officers mistakenly thought they were being fired upon from the vehicle and discharged their weapons more than a dozen times, sources tell Action News.
DELAWARE COUNTY, PA・14 HOURS AGO
6abc Action News

Sources say the man walked into the Upper Darby Police Department saying, "You want to talk to me because I want to talk to you about killing my girlfriend."
MONTGOMERY COUNTY, PA・5 HOURS AGO
6abc Action News

Jalisa Love says her daughter was fleeing the gunfire when a driver struck her. "Whoever did this, it has to stop. It's a shame and it's got to stop."
PHILADELPHIA, PA・1 DAY AGO

The victim had obtained a Protection From Abuse Order that was in effect at the time of her murder, investigators said.
UPPER DARBY, PA・27 MINUTES AGO
6abc Action News

The body was found Thursday afternoon near an apartment complex on the 3200 block of Bristol Road.
BENSALEM TOWNSHIP, PA・1 DAY AGO
6abc Action News

Police say the driver of an SUV traveling northbound collided with another vehicle on the Roosevelt Boulevard.
PHILADELPHIA, PA・12 HOURS AGO
6abc Action News

A 34-year-old man was shot multiple times in Frankford. He was pronounced dead at the scene.
PHILADELPHIA, PA・2 DAYS AGO

Police say 39-year-old Benjamin Ramos was behind the wheel when he crashed into a school bus full of children.
PENNSAUKEN TOWNSHIP, NJ・14 HOURS AGO
6abc Action News

Both the Winslow Twp. Middle School and the Board of Education office were briefly placed on lockdown.
EDUCATION・5 HOURS AGO
6abc Action News

On November 7, 2007, officers located Carlos Diaz Cotto suffering from a gunshot wound to the back inside a home on the 400 block of West Spencer Street.
PHILADELPHIA, PA・1 DAY AGO
6abc Action News

A young boy has died after he was hit by a vehicle in Northeast Philadelphia on Wednesday night.
PHILADELPHIA, PA・1 DAY AGO
6abc Action News

Last October, Rickia Young was driving down Chestnut Street in West Philadelphia with her 2-year-old son when her way was blocked by a protest following the fatal shooting of Walter Wallace Jr.
PHILADELPHIA, PA・2 DAYS AGO
6abc Action News

Police in South Jersey are investigating an accident involving a school bus on Wednesday afternoon.
PENNSAUKEN TOWNSHIP, NJ・1 DAY AGO