Google made an elaborate 16-bit video game that pays homage to Japan hosting the Olympics, and you can play it for free right now 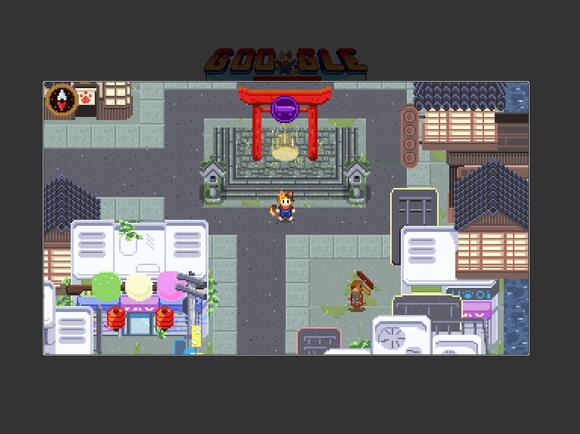 With the Olympic Games kicking off this week, Google is paying homage to its host city of Tokyo with a full-on video game.

It costs nothing, is fun to play, and even remembers where you left off if you close the window.

Read more: Netflix's new video-game strategy will live or die by how well it can create mega movie and TV franchises

The game - made in collaboration with Tokyo-based animation firm STUDIO4°C - is playable directly in-browser using the arrow keys and space bar. It stars an adorable calico cat named Lucky who's able to participate in a variety of sporting events.

A table tennis event and a skateboarding event were standouts in the short time we spent with the game, but there's a whole bunch more game in there - at least seven games in total, in addition to "extra hidden challenges," according to Google's blog post .

If nothing else, do yourself a favor and enjoy the aggressively charming intro video right here:

Got a tip? Contact Insider senior correspondent Ben Gilbert via email ( bgilbert@insider.com ), or Twitter DM ( @realbengilbert ). We can keep sources anonymous. Use a non-work device to reach out. PR pitches by email only, please.

Ad of the Day: Waste Creative and Supercell pay homage to retro gaming

Earlier this year, the classic Puma Suede took a trip to Japan and returned with a new “Made In Japan” offering—a premium take on a fan favorite consisting of signature Japanese craftsmanship and special attention to detail. The upgrades continue with two new “Made In Japan” propositions that reference the decorative stitches found in sashiko.
APPAREL・14 DAYS AGO
The Motley Fool

Electronic Arts' new franchise Apex Legends can drive growth for years to come. Take-Two Interactive has grown bookings at 17% over the last few years. Activision Blizzard has expanded the way players can interact with its franchises. You may be unaware unless you follow it closely, but video games are...
FIFA・15 DAYS AGO
Space.com

'They Are Here,' an alien abduction horror game, is coming in early 2022 and you can play a free demo now

A new creepy-looking alien abduction horror game called "They Are Here: Alien Abduction Horror" is due to be released in early 2022 and there's a free-to-play demo available now. The game follows a journalist who investigates an alien sighting at the Grayswood farm and must explore the area in the...
VIDEO GAMES・14 DAYS AGO

You Can Now Play PS4 Games On Your PC

Do you miss playing your PS4? Did you sell it off for a PS5? Or maybe you just gave up on consoles but still miss some of the classics. The good news is that if you do want to play PS4 games on your PC, the first and only stable PS4 emulator, Spine, has finally been released after initially being announced a couple of years ago.
VIDEO GAMES・13 DAYS AGO
thisgengaming.com

MMO strategy games (sometimes referred to as MMORTS games – which stands for Massively-Multiplayer-Online-Real-Time-Strategy games) are a genre of games that combine the critical decision making of strategy games with the thrill of playing with/against other people from around the world. While some MMO strategy games require you to pay...
VIDEO GAMES・13 DAYS AGO
geekculture.co

Cloud Song: Saga of Skywalkers, the free-to-play mobile Massively Multiplayer Role-Playing Game (MMORPG), has gone on both the App Store and Google Play Store’s top charts for free apps, and still has a spot on the charts now, a week after its launch. In fact, on 9 September 2021, just one day after the game’s launch in the Southeast Asia (SEA) region (Singapore, Malaysia, Vietnam, Thailand, Philippines, and Indonesia), Cloud Song hit the No. 1 spot in both stores under the Role-Playing and Adventure games categories.
VIDEO GAMES・12 DAYS AGO
godisageek.com

How do you choose the right video game

Playing online games is a fun activity that anyone may enjoy. However, many people are perplexed when it comes to choosing a specific game. Online gaming genres include role-playing, racing, strategy, action and adventure, sports, and simulation, to name a few. Choosing a game is not solely determined by itself. Your age, personality, culture, and gender all play a role in the process.
VIDEO GAMES・14 DAYS AGO

Google Made Potato Chips To Market The Pixel 6 – In Japan

Google typically does some interesting things to market its products, and the Pixel 6 is no exception. In Japan, Google made different potato chips that correspond with the different Pixel 6 colors. This is mostly about puns, since the campaign is called “Original Chips”, and is based entirely on potato...
WORLD・11 DAYS AGO
pocketgamer.com

Apple Arcade vs Google Play Pass - Which one is right for you?

Nowadays, subscription services are being introduced on multiple platforms which is why a lot of people are finding it difficult to choose the best one. When it comes to mobile gaming, there are two main subscription models, Google Play Pass and Apple Arcade. If you own both Android and iOS...
VIDEO GAMES・11 DAYS AGO
9to5Google

Google News Showcase is now rolling out in Japan

In late 2020, Google unveiled a $1 billion news licensing program to support publishers by surfacing card-based content across its platforms. Google News Showcase is now coming to Japan. The effort today has signed nearly 1,000 — up from 800 in July — deals with news publications in Germany, Brazil,...
BUSINESS・11 DAYS AGO
USA TODAY Sports Media Group

Given the pick-up and play portability of the Nintendo Switch, it makes sense that there are already several brilliant sports games to play on the device. It’s just too easy to snap out those Joy-Cons and get into a game quickly, even if you’re chilling with a group of friends in the great outdoors. This lends itself naturally to sports games that multiple players can enjoy in small bursts.
VIDEO GAMES・9 DAYS AGO
9to5Google

Gaming on the go is easier than it ever has been before and with gamepad support along with cloud gaming services like NVIDIA GeForce Now, you can play some of the best free-to-play titles on your Android phone without ever needing a dedicated gaming PC at home. To celebrate the...
VIDEO GAMES・10 DAYS AGO
NME

Microsoft Solitaire Collection now includes a Halo themed deck, and is available on Xbox Game Pass for PC. Released to celebrate 20 years of Halo, the clash of two Microsoft titans was announced this week, and changes both the front and backs of the Solitaire cards to make them in keeping with the Halo theme.
VIDEO GAMES・5 DAYS AGO
winbuzzer.com

Digiarty, the makers of the famous WinX DVD product line, have released its fully fledged free video editor VideoProc Vlogger. If you still rely on Windows Movie Maker as your main tool for video editing as professional solutions like Adobe Premiere and Final Cut Pro are too expensive you might want to reconsider.
SOFTWARE・7 DAYS AGO
happymag.tv

Steam Next Fest’s week-long event features demos ranging from psychological card-based horror games, to comedic visual novels and pixel-art cyberpunk. Running from October 1st to 7th, Steam Next Fest, previously named Steam Game Festival, will be a week-long event featured on the platform. It gives players the opportunity to enjoy free demos for upcoming games, to chat with developers, and to provide them with valuable feedback.
VIDEO GAMES・5 DAYS AGO
Game Informer Online

2021 has delivered several great indies, Death’s Door is among the best. Channeling a bit of Zelda, a bit of Metroid, and a bit of Souls, players take on giant bosses and explore enchanting scenery. The soundtrack is also grand, and hey, you get to play as a bird, which is even cooler.
VIDEO GAMES・4 DAYS AGO
SPY

The Nintendo Switch is an extremely versatile system. Not only can you play it in handheld mode with its two detachable Joy-Con controllers attached on both sides, but you can dock it at home and play on your TV for a super-sized view of your game. It’s really up to you which Nintendo Switch controller you choose to play with. If you decide to play with your Switch docked, you can opt to play with a variety of different controllers aside from the included Joy-Cons, each of which can be perfectly suited to the games you love. For small hands to...
VIDEO GAMES・2 DAYS AGO
Business Insider

Amazon's head of gaming has absurdly ambitious goals, including creating 2-3 games that 'capture millions of players and stay in the market for 10+ years'