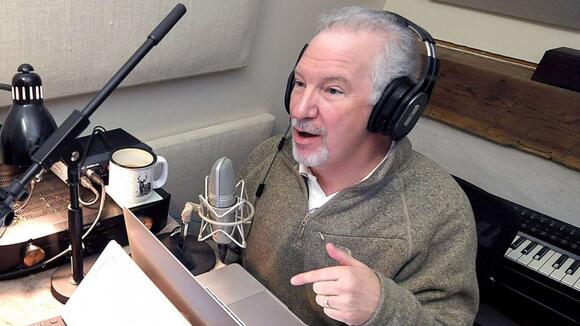 A conservative talk radio host from Tennessee who had been a vaccine skeptic until he was hospitalized from COVID-19 now says his listeners should get vaccinated.

Phil Valentine's brother, Mark Valentine, spoke at length on WWTN-FM in Nashville on Thursday about his brother's condition, saying he is in a critical care unit on supplemental oxygen, but not on a ventilator. Phil Valentine has had an afternoon talk radio show on the station for years.

“First of all, he's regretful that he wasn't a more vocal advocate of the vaccination,” Mark Valentine said of his brother. “For those listening, I know if he were able to tell you this, he would tell you, ‘Go get vaccinated. Quit worrying about the politics. Quit worrying about all the conspiracy theories.’"

Mark Valentine took exception to the idea that Phil Valentine was anti-vaccination, labeling him “pro-information” and “pro-choice” on the vaccine but adding, “he got this one wrong."

After Phil Valentine tested positive for COVID-19 but prior to his hospitalization, he told his listeners to consider, “If I get this COVID thing, do I have a chance of dying from it?” If so, he advised them to get vaccinated. He said he made the decision not to get vaccinated because he thought he probably wouldn't die.

Phil Valentine also said that he was “taking vitamin D like crazy” and had found a doctor who agreed to prescribe ivermectin, a drug used to treat parasites in animals. The U.S. Food and Drug Administration warns against taking ivermectin for COVID-19, advising that it is not an anti-viral drug and can be dangerous.

Mark Valentine said he got vaccinated against COVID-19 after his brother became ill. Realizing that he has a family he is responsible for, he said not getting vaccinated “is just a selfish position to have, and, absent any concrete evidence to the contrary in terms of side effects and negative effects of the vaccine, I have a duty to do that.”

Mark Valentine's comments came the same day Tennessee's Republican Gov. Bill Lee defended his administration’s firing of the state’s vaccination chief and rollback of outreach for childhood vaccines, both of which sparked national scrutiny over Tennessee’s inoculation efforts against COVID-19.

Former state vaccine chief Michelle Fiscus has repeatedly said she was terminated to appease some GOP lawmakers who were outraged over state outreach for COVID-19 vaccinations to minors. Some lawmakers even threatened to dissolve the Health Department over the marketing.

Tennessee continues to have some of the lowest vaccination rates in the country even as cases are rising. As of Thursday, 12,666 people in Tennessee had died from COVID-19.

Another conservative talk radio host who urged listeners to boycott the COVID-19 vaccine has died from the disease caused by exposure to the coronavirus. Bob Enyart, a Denver radio host and pastor, died two weeks after he and his wife were hospitalized with what his church called "severe" cases. He was 62.
PUBLIC HEALTH・6 DAYS AGO
Tacoma News Tribune

A self-described “right-wing religious fanatic” online radio host in Colorado who battled COVID-19 vaccine and mask mandates has died of coronavirus, his co-host said. Bob Enyart and his wife, Cheryl, had been hospitalized with COVID-19 for more than a week, according to a Facebook post by Denver Bible Church, where he was a pastor.
COLORADO STATE・6 DAYS AGO
marketresearchtelecast.com

If there is a problem you face USA in their battle against covid, they are the skeptical to get immunized, either distrust, fear, or religious beliefs. A large segment of the population refuses to inoculate, despite continued warnings from health authorities around the world. In parallel, the Delta variant advances on the unprotected, being one of the mutations responsible for new infections in minors and unvaccinated adults.
RELIGION・4 DAYS AGO
washingtonnewsday.com

Bob Enyart, a conservative radio host who fought COVID restrictions in court, died of the disease.

Conservative firebrand Bob Enyart, the pastor of the Denver Bible Church and indelible talk show host, has died from COVID-19, his radio co-host announced Monday on Facebook. “Bob Enyart was one of the smartest, and without question, the wisest person I’ve known,” Fred Williams, Enyart’s co-host on the Real Science Radio show, said in a post.
PUBLIC HEALTH・6 DAYS AGO
uticaphoenix.net

Samantha Wendell could not wait for her wedding this summer. For nearly two years, the 29-year-old surgical technician had been meticulously planning every detail, from the seating chart to the Tiffany blue floral arrangements, her fiancé, Austin Eskew, said. Wendell and Eskew wanted to start a family as soon as...
KENTUCKY STATE・3 DAYS AGO
WSET

LYNCHBURG, Va. (WSET) — Doctors in Virginia are urging vaccine hesitant groups to get the COVID-19 shot. Dr. Winifred Agard, an Emergency Physician at Centra, said vaccination rates are lower in certain groups than others, particularly the African American and Hispanic communities. She said factors like mistrust of the government or healthcare all play into vaccine hesitancy. However, she had this message for those still questioning getting vaccinated.
LYNCHBURG, VA・18 HOURS AGO
selmasun.com

Study shows reasons for hesitancy in getting COVID vaccine

A study by quotewizard.com shows the varying reasons that people are hesitant to get the COVID vaccine, with 53% of Alabamians reporting concerns about the side effects. Side effects among people vary but possible effects include nausea, fever, tiredness, headache, muscle pain and chills according to the CDC. The report...
11 DAYS AGO

Bob Enyart, a controversial Colorado conservative radio host, died of COVID on Monday after contracting a virus and having built a career by mocking people who died as a result of contracting a virus. Enyart’s radio contemporary, Rush Limbaugh, became an icon in the talk radio industry by employing a...
PUBLIC HEALTH・5 DAYS AGO
expressnews.com

Talking about the COVID-19 vaccine with family and friends can get contentious. But how do you talk to hesitant loved ones about getting the shot without the conversation turning south?. We asked Dr. Luz M. Garcini, an assistant professor at UT Health San Antonio who is researching barriers that lead...
SAN ANTONIO, TX・7 HOURS AGO
hawaiinewsnow.com

HONOLULU (HawaiiNewsNow) - When the COVID vaccines first rolled out, Kaneohe resident Tracie Poyer and her husband decided to hold off. “I was like, you know I’m pretty healthy. I don’t think it’s gonna effect me,” Tracie Poyer said. “So I wasn’t sure if I should get it or not.”
HONOLULU, HI・4 DAYS AGO
Washington Times

Howard Stern pushed for mandatory COVID-19 vaccinations Tuesday while railing against “nut jobs” who refuse to get jabbed, including several fellow radio personalities who recently died from the disease. The longtime radio host made the remarks on “The Howard Stern Show” on SiriusXM in his first broadcast in more than...
PUBLIC HEALTH・13 DAYS AGO

COVID In Colorado: Doctors React To FDA Decision On Vaccine Booster Shots For Only Targeted Group

DENVER (CBS4)– Plans to roll out a Pfizer COVID-19 vaccine booster shot to the general public will be scaled back. This comes after the Food and Drug Administration approved the boosters only for a targeted group. (credit: CBS) “They felt like there wasn’t sufficient data to recommend it broadly to all,” Director of Infection Prevention at UCHealth, Dr. Michelle Barron said. For several weeks they have been providing a third dose to those now in that approved group. “They did tentatively approve it for over 65 and those with high-risk medical conditions as well as health care workers,” Barron said. So the question...
COLORADO STATE・2 DAYS AGO
People

"She was vaccinated but was infected by others who chose not to be. The cost was her life," Candace Cay Ayers' family wrote in her obituary. The family of a 66-year-old woman who died of a breakthrough COVID-19 infection included a powerful message in her obituary for people who have chosen not to get the vaccine.
FAMILY RELATIONSHIPS・4 DAYS AGO
CW33

Florida dad regrets not getting COVID vaccine after daughter, 15, dies

PENSACOLA, Fla. (WKRG) – A Florida family is grieving after their 15-year-old died of COVID-19. Victoria Ramirez was a sophomore at Booker T. Washington High School in Pensacola. “She was so beautiful and so smart,” said her father, Hector Ramirez. Victoria tested positive for COVID-19 almost two weeks ago. She...
FLORIDA STATE・10 DAYS AGO
96.3 The Blaze

Are You Against All Vaccinations or Just COVID?

To vaccinate or not to vaccinate - that is the question. Apologies to Shakespeare, but a new study from the UM's College of Health will be asking that question as they study both sides of the COVID-19 vaccination issue. The CDC says about 53 percent of Montanans have received at...
MISSOULA, MT・3 DAYS AGO
timesdelphic.com

Vaccine Hesitancy in the Drake Community

Last Thursday on Sept. 9, President Biden announced that the White House will be mandating vaccines for all workplaces with over 100 employees. While university students are not considered “employees,” Drake is doing what they can to encourage higher vaccine rates among students and staff, including the use of incentives and the urging of students to get the vaccine in weekly COVID update emails.
HEALTH・5 DAYS AGO
bridgemi.com

Sept. 13: Michigan COVID nurses reach their limit: ‘I know I can’t do this forever’. The clock is ticking for Sharon Petty to decide whether she’ll submit to a COVID-19 vaccination or lose her job as a phlebotomist at Beaumont Hospital in Dearborn, but she said her mind is already made up.
MICHIGAN STATE・10 DAYS AGO
northwestgeorgianews.com

TUESDAY, AUG. 3: After going weeks without speaking to each other because I yelled at my mom about not getting vaccinated, she finally calls me from her home in Texas. The news: She has just tested positive for COVID-19. THURSDAY, AUG. 5: I call my mom and we fight until...
PUBLIC HEALTH・4 DAYS AGO
southarkansassun.com

Texas COVID-19 Vaccine: Second-Shot Hesitancy Increasing; What Does It

More than a million individuals in Texas are late for their second COVID-19 vaccination by more than 90 days. According to the Department of State Health Services, this is the case. Approximately two million are late by at least 30 days. As of September 6, 1.89 million individuals have not...
TEXAS STATE・3 DAYS AGO