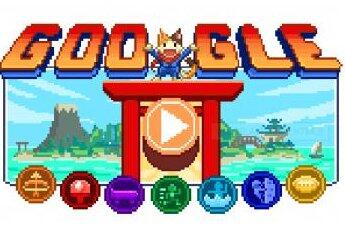 "Over the coming weeks, join calico (c)athlete Lucky as she explores Doodle Champion Island: a world filled with seven sport mini-games, legendary opponents, dozens of daring side quests, and a few new (and old ;)) friends," explained a press release from Google.

"Her ultimate goal? Defeat each sport Champion to collect all seven sacred scrolls -- and complete extra hidden challenges across Champion Island in the purrr-ocess."

The game was announced just as the 2021 Olympic Games are about to kick off in Tokyo.

Google SearchLiaison announced on Monday November 29, 2021 via Twitter that Google News was experiencing a bug and that the problem would not be fixed until Tuesday or sometime after December 1st. The issue that Google identified allowed non-news content to bleed through the Google news search results. Google’s Announcement...
INTERNET・7 DAYS AGO
TechRadar

Google Play announces Best of 2021 Apps and Games in India: Here are the winners

Google, in a celebration of India's growing expertise in app and games tech, has announced Google Play's Best of 2021 (obviously all of them in the Android ecosystem). Besides the regular categories, Google has added three more to the list for the current year. Bitclass, the app enabling cohort-based learning,...
CELL PHONES・6 DAYS AGO
mobilesyrup.com

Though we may have missed it when it launched back in June, Google has added a fun pinball mini-game to the Google app on iOS. As far as Google’s Easter Egg games go, this pinball one has a surprising amount of depth to it. As you play, the levels change and more power-ups/items start to appear on the screen. It’s a straightforward concept but addicting in a “I need a high score” type of way. It might even be better than the dino jumping mini-game featured in Chrome.
TECHNOLOGY・7 DAYS AGO
9to5Google

Google is honoring Lotfi Zadeh, the Azerbaijani computer scientist who came up with the idea of “fuzzy logic,” with a homepage Doodle. Lotfi Aliaskerzadeh — later changed to “Lotfi Aliasker Zadeh” — was born in Baku, Azerbaijan, on February 4, 1921, while his father, a journalist, was on assignment there from Iran. In 1931, at age 10, Zadeh and his family moved back to Tehran, Iran.
COMPUTER SCIENCE・7 DAYS AGO

Google Names the Best Apps and Games of 2021

Each year, Google names the best apps and games; those that offer unique experiences or creative gameplay. Both the Google team and the public get a say in crowning winners across a variety of categories. For the first time, in a bid to inspire innovation on these platforms, Google also...
TECHNOLOGY・7 DAYS AGO
UPI News

Dec. 2 (UPI) -- Google is celebrating French painter Georges Seurat, on what would have been his 162nd birthday, with a new Doodle. Seurat was born on this day in Paris in 1859. The artist is known for examining the scientific study of color theory and optical physics to develop an original style he named chromo-luminarism, later known as Pointillism or Divisionism.
VISUAL ART・5 DAYS AGO
firstsportz.com

Google has a new Doodle on Monday you can count on eating up a chunk of your free time. Google is celebrating all things pizza with an interactive puzzle Doodle that challenges you to slice up pizzas with some of the most popular toppings from around the world to order. Sounds easy, you say? Well, the deeper you get into the crust of the game, the harder they get.
FOOD & DRINKS・1 DAY AGO

Every year, Google pulls out its list of the best Android system apps that are downloaded from its Google Play Store platform. These are chosen by the editor of the online store, which by observing different metrics and data, generates the list of applications that have stood out the most.
CELL PHONES・4 DAYS AGO
Thrillist

Google Doodles are one of life's simple pleasures. Sometimes they teach you something, and sometimes they give you something fun to do for a moment before you get on with what you were searching for. Today is one of those times, as today's Google Doodle is a fun pizza-themed game.
TECHNOLOGY・19 HOURS AGO
thefocus.news

How to cut a pizza into 7 slices as Google's Doodle game puzzles players?

Google is celebrating pizza today with a dough-slicing game that’s making people scratch their heads – how do you cut a pizza into 7 slices? And why is Google celebrating pizza when it’s not even National Pizza Day?. We explore the history behind the culinary art of Neapolitan “Pizzaiuolo” and...
TECHNOLOGY・1 DAY AGO
9to5Google

The latest UK-only Google Doodle is helping Scots celebrate St. Andrew’s Day for 2021 by highlighting some of the most prominent cultural icons of Scottish heritage. For those unaware, St. Andrew’s Day is the official national day of Scotland — not to be confused with England, Northern Ireland, or Wales, which together make up the United Kingdom. Google enlisted the help of Glasgow-based illustrator Fran Caballero to help create this St. Andrew’s Day masterpiece for 2021.
WORLD・7 DAYS AGO
MarketWatch

The pizza boom continues. Americans have long devoured more than their fair share of the Italian favorite. But pizza sales soared during the pandemic, with the major chains seeing a combined 6% uptick to $27.5 billion in 2020, according to one industry report .
INTERNET・18 HOURS AGO
inputmag.com

Goddamn you, Google. Not for the anti-regulatory propaganda, or the disingenuous climate change awareness, or the decision to abandon the Pixelbook (well, actually yes, but that’s not the point right now). Today we’re specifically mad at Monday’s Google Doodle, which supposedly celebrates the universally beloved pizza pie, alongside today’s four-year...
CELL PHONES・17 HOURS AGO
Newsweek

Around five billion pizzas are consumed worldwide every year, with around 350 slices eaten per second in the U.S. alone, according to Google.
FOOD & DRINKS・1 DAY AGO
WTKR News 3

If homework is your idea of a good time, "Big Brain Academy: Brain vs. Brain" is your next Switch assignment.
VIDEO GAMES・2 HOURS AGO
abc27 News

(WHTM) — First in Tuesday’s Tech Bytes, WhatsApp is upgrading its feature that makes your messages disappear. Users can now turn on “disappearing messages” by default to automatically delete messages after a set period of time. And there are more time frames to choose from, so messages can vanish in 24 hours, seven days, or […]
CELL PHONES・49 MINUTES AGO
howtogeek.com

How to Find Hidden Apps on Android

Joe Fedewa is a Staff Writer at How-To Geek. He has close to a decade of experience covering consumer technology and previously worked as a News Editor at XDA Developers. Joe loves all things technology and is also an avid DIYer at heart. He has written thousands of articles, hundreds of tutorials, and dozens of reviews. Read more...
CELL PHONES・20 DAYS AGO
The Independent

China’s Yuta 2 rover has spotted a “mystery house” on the far side of the Moon.The strange cube was spotted on the horizon around 80 metres from the rover’s location in the Von Kármán crater in November, next to an impact crater.Yuta 2 will spend the next two to three months moving across the crater to get a closer look at the object which is more likely to be a large boulder than anything else; “mystery house” (shenmi xiaowu in Chinese) is a placeholder name referenced by Our Space, a Chinese science outreach channel affiliated with the China...
AEROSPACE & DEFENSE・22 HOURS AGO
CNET

Android comes with an abundance of settings that allow you to customize and improve smartphone experience. By default, Android picks what it considers the best settings, but depending on the type of user you are -- beginner, average or pro -- tinkering with your Android preferences and settings is a good idea to get the most out of your device.
CELL PHONES・24 DAYS AGO