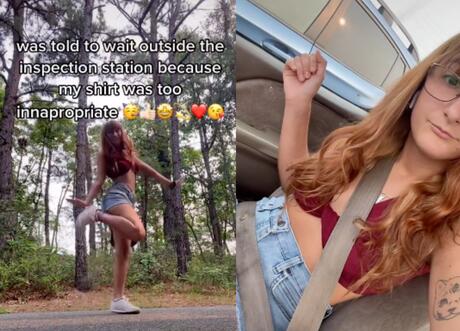 A woman has claimed that she was told to leave a garage where she was having her car inspected because her crop top and shorts were too “inappropriate” for the facility.

In a viral TikTok video that has been viewed more than one million times, Tia Wood says that she was “told to wait outside the inspection station because my shirt was too inappropriate.”

She then reveals that she was wearing a pair of denim shorts, white trainers and a short crop top, but nothing out of the ordinary. 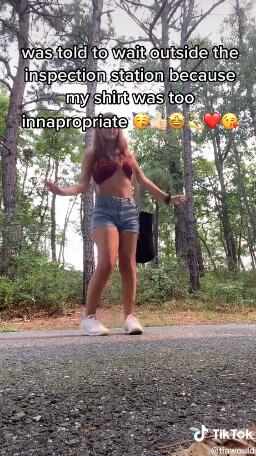 In a follow-up video, Wood sarcastically mocks the alleged incident by saying: “What I’m about to show you is potentially very dangerous for the welfare of your car so make sure your vehicle is nowhere near your phone for the next like 10 seconds.”

Wood then shows us her outfit again before mockingly saying: “Oh, what’s that? Your car is fine? Then why the f**k was a kicked out of the inspection station.” 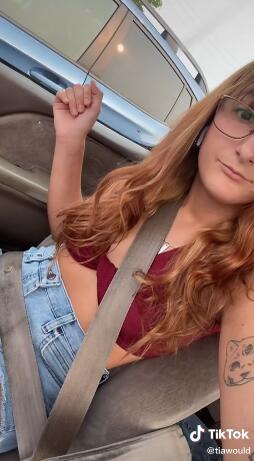 She adds that was made to feel like a “disgrace” and that she was told by the female member of staff to walk around to the other side of the building and wait for her car to be returned to her, rather than wait inside with the other customers.

Wood’s video soon went viral on TikTok with many defending her and complimenting her outfit, claiming the staff member at the station had “jealously vibes”, whereas others thought her top looked more like a “fancy bra at best.”

In another video , Wood films herself on the phone to the station where she asks them if they actually have a dress code for their customers. The woman on the other end of the phone seems rather confused by the question, as the only policy they ask of their customers is to wear a face-covering to stop the spread of coronavirus. 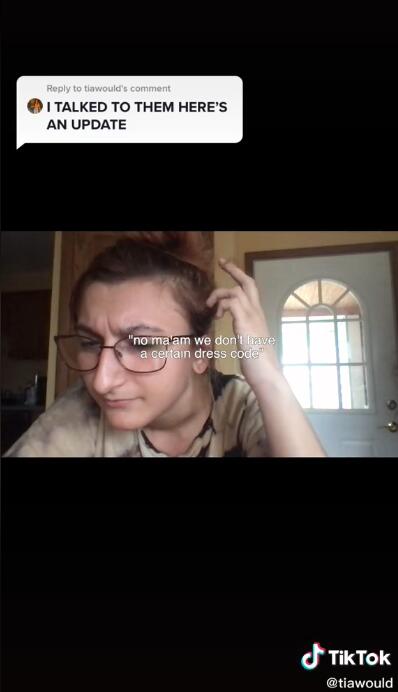 Wood clarifies that wasn’t refused service but that she apparently wasn’t allowed to go into the waiting area with the others customers because of her outfit. The woman from the company calmly and respectfully continues to ask what exactly happened adding: “I’m asking questions because this is the first time we’ve ever heard something like this.”

She also calls the incident “very odd” and says that even her manager had never heard of anything like that in the entire time they had worked there. Wood adds that she doesn’t want the woman who told her to wait outside to be fired and is raising the incident to make sure it doesn’t happen again.

The woman from the inspection company apologises for what happened to Wood by saying: “I apologise for that because that is not how we do things. We don’t have a certain dress code. Everyone’s an adult.

“As long as you’re not there naked. That’s not something that we discriminate against so I’m sorry for your experience. I will get this to the right people and this will be addressed.”

Wood concludes the phone call by thanking the other woman for her help.

As Daily Dot reports, under the Civil Rights Act of 1964 businesses cannot turn customers away for their race, ethnicity, religion, gender or nationality but customers’ outfits are not protected under that act.

Some girls: I dont like when guys creepily stare at me. Also some girls: Hey this bra could totally be a shirt!

so she took a photo op? Looks like she got ALL the attention she was after, don't know what she's complaining about 😅

Why do you think she wore this outfit.She wanted attention so she got it..Case solved.

Netizens are over themselves with rage after a deaf woman called out the Dunkin fast food joint for turning down her order because of her disability. The fast-food restaurant, Dunkin' Donuts, has come under fire after a woman called them out in a tear-jerking video for refusing her service because she was deaf.
RESTAURANTS・3 DAYS AGO
Amomama

When a woman visited a dental hospital, she encountered a stranger who placed her in an uncomfortable situation. Thankfully she thought on her feet and alerted someone to assist her. Andrea Elena didn't expect a stranger to approach her this month while waiting in line at a dental hospital in...
BEHIND VIRAL VIDEOS・10 DAYS AGO
Daily Mail

Brian Laundrie's creepy and macabre social media posts have been revealed after he went on the run and his fiancé Gabby Petito's death was ruled a homicide. Images of demons, crypt keepers, skeletons and cynical quotes filled the pages of Laundrie's Pinterest account suggesting a strange fascination with death. A...
PUBLIC SAFETY・23 HOURS AGO
International Business Times

Two men in Nigeria have been arrested after they allegedly raped a 65-year-old farmer until he went into a coma. The elderly victim, identified as Gilbert Nnagi, was found unconscious in one of the alleged rapists' homes in Ondo Saturday evening, according to Sahara Reporters. He was allegedly unable to talk when he was found and had to be taken to the hospital immediately.
PUBLIC SAFETY・13 DAYS AGO

‘Dad, it’s weird, but I think I pooped my pants!’ Minutes later, it hits me. ‘That’s not poop!’: Dad transforms into ‘the period fairy’ after realizing daughter is experiencing first cycle

Get more stories like this in your inbox! Sign up for Smile, our free daily good news email read by over 825K people!. ‘Dad, it’s weird, but think I pooped my pants!’ So, I rush to school, bring her a change of undies, put the old ones in a bag, and rush back to my conference call. I threw the bag in the kitchen trash.
FAMILY RELATIONSHIPS・1 DAY AGO
Amomama

Little Child Disappears from a Plane during a Flight, Then Poor Mom Discovers the Truth — Story of the Day

When a woman claimed that her daughter disappeared mysteriously during a flight, passengers began mocking her, declaring she had gone nuts. But then she discovered something that proved she was right. “Please help! I can’t find my daughter,” Sophia cried. “I was sidetracked for a moment to change my baby’s...
RELATIONSHIPS・6 HOURS AGO
centralrecorder.com

Girl Catches Her Boyfriend Cheating With Her Roomate Through TikTok Video

Woman says she was removed from flight due to ‘unacceptable’ outfit

(KOMO) - A passenger on an Alaska Airlines flight says she was harassed by flight attendants and removed from the plane due to her outfit. She says she followed instructions to cover up, but police escorted her off the plane anyway. The video of Ray Lin Howard being led away...
PUBLIC SAFETY・13 DAYS AGO

A flashy welcome! Woman is left mortified after accidently showing her underwear to her new neighbours while taking out the recycling

A 'mortified' homeowner was left hiding from her new neighbours - after accidentally flashing them when she met them for the first time. Olivia Gomez was moving her bins on August 3 when she spotted the new family who had moved in next door to her in Warrington, Cheshire, only days earlier.
PUBLIC SAFETY・16 DAYS AGO
Insider

"I basically did my own hair for that really high fashion shoot. That should never be happening," Smith said on a new episode of "Red Table Talk."
BEAUTY & FASHION・7 DAYS AGO
The US Sun

A NEW mum has given birth to a baby girl who looks even older than her due to a rare condition. The 20-year-old woman gave birth to a girl with the rare "Benjamin Button" condition, also called Hutchinson-Gilford syndrome, that causes sufferers to age faster than usual. Similarly to Brad...
WORLD・21 DAYS AGO
washingtonnewsday.com

After giving birth out of wedlock, a mother throws her two-month-old babies into the stream.

After giving birth out of wedlock, a mother throws her two-month-old babies into the stream. A lady threw her 2-month-old twin daughters into a stream because she didn’t want to retain them because they were born out of wedlock in a disturbing occurrence. On Sunday, the tragedy occurred in Mandi,...
PUBLIC SAFETY・2 DAYS AGO
Amomama

Mom Discovers Old Man That Meets Her Daughter Every Morning before School in 2018, Finds Out Who He Really Is

Gina Michelle was simply taking her daughter to school when she came across a man with the kindest heart. He was intent on instilling love, encouragement, and motivation in these kid's hearts. Taking to Facebook in 2018, mother Gina Michelle, mother of 4 children under ten years old, shared a...
FAMILY RELATIONSHIPS・1 DAY AGO
The US Sun

THIS is the moment a little girl sat in her handcuffed dad's lap after he was stopped by police for failing to wear a mask in a Covid hotspot. The 31-year-old was walking in through a park in Sydney, Australia, with his young daughter when cops questioned him, as he didn't have a face covering on as per lockdown rules.
TV & VIDEOS・24 DAYS AGO
Daily Mirror

After the last 18 months, delivery drivers globally deserve a pay rise. During the pandemic, they became some of the most highly valued members of society, working dusk to dawn to make sure people received their packages. Now one Amazon delivery driver has gone viral after they went the extra...
PUBLIC SAFETY・21 DAYS AGO
The US Sun

Warning as baby girl, 1, dies a week after choking on a COOKIE in front of her horrified parents

A BABY has died a week after choking on a cookie in front of her horrified parents at their home, the family have said. One-year-old Isabella Stark, was walking around the house in South Africa eating a macadamia cookie, when she tragically inhaled part of the biscuit. She was rushed...
WORLD・19 HOURS AGO
The US Sun

A "BEAUTIFUL" personal trainer mum killed herself after "not being able to cope" - and her heartbroken husband has paid an emotional tribute to her. Michelle Sparman, 48, leaves behind two sons - Max, 11 and Sam, 8 - as well as her devastated fiancé Roger Stephens, 51. Michelle, who...
CELEBRITIES・18 DAYS AGO
The US Sun

A WOMAN was left horrified after accidentally hair spraying hundreds of spiders and bugs to her bedroom wall. TikTok user @leonarodicaprio panicked after a plague of tiny creepy crawlies appeared in her room - and rushed to grab the first item that she had to hand. In an attempt to...
BEHIND VIRAL VIDEOS・13 DAYS AGO
The US Sun

Unvaccinated healthy Texas student, 19, dies of Covid and her mom tells of regret that she didn’t make her get the shot

A HEARTBROKEN mom says she regrets not forcing her 19-year-old daughter to get a jab after the healthy student died of Covid. Breanna Gray, from Texas, was diagnosed with coronavirus in late July and died within just a few weeks. The teen had no underlying conditions and was about to...
TEXAS STATE・17 DAYS AGO
Daily Mirror

A newborn girl has been rescued after being spotted by a Good Samaritan as she was seen sleeping alone inside a drainage pipe. The one-month-old infant was seen lying on a makeshift bed made of carton and cloth under a bridge in Laguna province, in the Phillipines. Concerned passerby Jefferson...
HOMELESS・1 DAY AGO