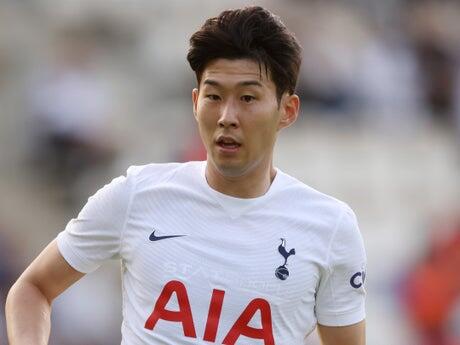 The Korean forward, who has committed his future to Spurs until 2025, has scored 107 goals and claimed 64 assists in 280 appearances since signing from Bayer Leverkusen in 2015.

After signing his new deal, the 29-year-old said: “It was already a big honour to play here for six years, the Club have showed me massive, massive respect and obviously I’m very happy to be here.

“It’s like home, especially with the fans, the players, the staff. There was no decision. It was easy. I’m so happy to be here and will be so glad to see the fans again soon.”

Managing Director Fabio Paratici added: “We are pleased to have agreed a new long-term contract with Son as we move towards the start of a new season and a new chapter for the Club with Nuno Espirito Santo.

“Everyone can see the real positive impact he has on the Club, both on and off the field, and we are delighted that he will play a part in what we are trying to achieve in the coming years.”

Tottenham boss Nuno admits Heung-min Son is out of their clash with Crystal Palace due to a calf problem. Nuno is unsure how long he could be without Son, with doctors set to determine whether the injury will keep him out for the long term. "Like some of our players,...
PREMIER LEAGUE・9 DAYS AGO
tothelaneandback.com

[Images] Tottenham stars pictured training as the international break goes on. Tottenham will be cautiously optimistic at this stage of the season. They managed to win all three of their league outings in August meaning they are top of the table. Post that, the international break was on and a host of Spurs stars went to their respective nations to play the WC Qualifiers, while the Tottenham players who stayed back continue training at the club’s Hotspur Way facility.
PREMIER LEAGUE・10 DAYS AGO
SkySports

Tottenham forward Heung-Min Son played no part in South Korea's World Cup qualifying win over Lebanon on Tuesday due to a calf injury. The Korean skipper played the full 90 minutes in the goalless draw against Iraq on Thursday but, hours before the game against Lebanon, the Korea Football Association (KFA) revealed that he had since strained his right calf.
PREMIER LEAGUE・11 DAYS AGO
Daily Mail

Tottenham suffer injury scare as Son Heung-min picks up calf injury while on international duty with South Korea and is a doubt for Saturday's trip to Crystal Palace... with Cristian Romero and Giovani Lo Celso also ruled out

Tottenham have been handed an injury scare during the international break as Son Heung-min has sprained his right calf whilst on South Korea duty. The Spurs forward started feeling discomfort in his leg during a training session on Monday after playing the full 90 minutes of their goalless draw with Iraq earlier this week.
PREMIER LEAGUE・12 DAYS AGO

Tottenham were handed another fitness issue to contend with ahead of their clash against Crystal Palace on Saturday after midfielder Oliver Skipp hobbled out of England's win over Kosovo on Tuesday night. Skipp has started all three Premier League games on the season in the heart of the Spurs midfield...
PREMIER LEAGUE・11 DAYS AGO
Yardbarker

Arsenal reportedly got into pretty advanced talks over Emerson Royal this summer, but a proposed swap deal with Barcelona fell through. Emerson ended up joining Spurs instead, making an unconvincing debut for the club against Crystal Palace this weekend in a 3-0 defeat, but things could’ve been quite different. According...
PREMIER LEAGUE・6 DAYS AGO
AFP

All eyes are once again on Cristiano Ronaldo as Manchester United aim make amends for a shock Champions League defeat to Young Boys when the Premier League leaders head to West Ham on Sunday. It was Jesse Lingard's woeful backpass that condemned United to defeat against Young Boys.
PREMIER LEAGUE・2 DAYS AGO
fourfourtwo.com

Harry Kane could sign a new contract with Tottenham that contains a release clause, according to reports. The England captain spent most of the summer being linked with a move to Manchester City. The 28-year-old was keen to join the Premier League champions, but Spurs stood firm in their £150m...
PREMIER LEAGUE・4 DAYS AGO

Tottenham have been handed a double injury boost ahead of Sunday's clash against Chelsea as Heung-Min Son and Eric Dier are both hopeful of being fit. Son sustained a calf injury while on international duty with South Korea and missed Spurs' disappointing 3-0 defeat to Crystal Palace last Saturday. The...
PREMIER LEAGUE・3 DAYS AGO
tothelaneandback.com

Transfer News: Tottenham Hotspur receive blow in chase of Inter star Milan Skriniar. According to transfer news from Calciomercato (h/t IB Times), Tottenham Hotspur have received a blow in their pursuit of Milan Skriniar. The Slovakian could be about to sign a new contract with Inter Milan which might end any faint hopes Spurs have of landing him.
PREMIER LEAGUE・1 DAY AGO
ESPN

The summer transfer window is closed for the top leagues in Europe! After a summer full of international football, countless clubs waited until the last minute to pull off their transfers. See all the major deals here and check out how we graded the biggest signings. But just because the window is shut until January, that doesn't mean the rumours won't keep coming.
MLS・1 DAY AGO
The Independent

Tottenham boss Nuno Espirito Santo says Giovani Lo Celso Cristian Romero and Davinson Sanchez will be considered for selection against Chelsea.All three players have been in Croatia for the last 10 days following their decision to defy Premier League rules and travel to South America for World Cup qualifiers.Lo Celso and Romero travelled to Argentina while Sanchez was in Colombia, meaning they would have had to do a hard quarantine had they come straight back to England.Instead, they circumvented that by going to Croatia, where rules are relaxed, with Spurs sending out a sports scientist to try to keep...
PREMIER LEAGUE・1 DAY AGO

Tottenham vs Chelsea prediction: How will Premier League fixture play out today?

Chelsea visit Tottenham Hotspur in the Premier League today looking to build on their strong start to the season under Thomas Tuchel. The Blues are unbeaten in their opening four matches with their only dropped points coming against Liverpool at Anfield where they played the second half with 10 men. Romelu Lukaku has settled into life on his return to Stamford Bridge and took his tally to four goals from his first four games following strikes in the wins over Aston Villa and Zenit St Petersburg this week. The Belgian comes up against Harry Kane in a battle of two...
PREMIER LEAGUE・6 HOURS AGO
districtchronicles.com

A woman who was hit by a wayward Cristiano Ronaldo shot asked the Portuguese forward if she had died. Marisa Nobile was hit during the warmup to Manchester United’s UEFA Champions League clash against Young Boys on Tuesday. She collapsed to the floor and Ronaldo rushed over to check she...
SOCCER・2 DAYS AGO
newschain

Now that the transfer window has closed, the biggest player related story with Liverpool is where or not Mo Salah is going to sign a new contract. The rumours are flying, of course, and everyone has an opinion. Go to Liverpool pundit Jamie Carragher was on Sky Sports giving his opinion on the matter”
PREMIER LEAGUE・14 DAYS AGO
The Independent

Burnley have announced defender Bobby Thomas has signed a new three-year contract with the club.The 20-year-old Clarets academy product made his first-team debut in a Carabao Cup win at Millwall last September.He subsequently spent the second half of the season on loan at Barrow making 21 Sky Bet League Two appearances, and has been on the bench for all of Burnley’s games so far this term.Thomas said in quotes on the Turf Moor outfit’s official website: “It’s something you work towards since you are a young kid. To sign a long-term deal at an established Premier League side is a nice feeling.“It’s an important step, that transition from coming out of the 23s, hopefully into a first-team environment, whenever that may be, which will be a nice reward for working hard and all the sacrifices.”
PREMIER LEAGUE・13 DAYS AGO
Sports Illustrated

The Manchester City defender tallied the opening goal of Wednesday night’s 6–3 win over RB Leipzig, and his father died "minutes after" watching it happen.
SOCCER・2 DAYS AGO