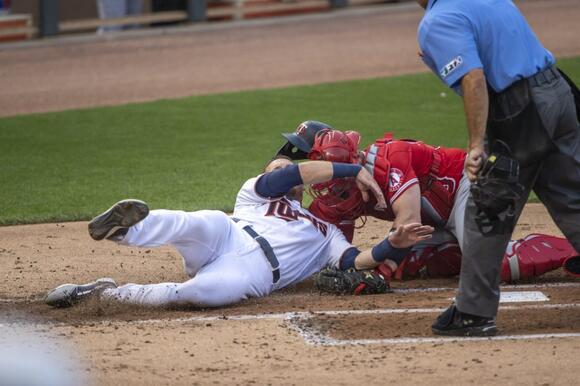 Jack Mayfield hit a three-run homer in the fifth inning and Andrew Heaney tossed seven innings of two-run ball to lead the Los Angeles Angels to a 3-2 victory over the Minnesota Twins on Thursday in Minneapolis.

Heaney (6-7), who had an 8.49 ERA over his previous five starts, held the Twins to four hits while walking two and striking out seven. He retired the final 11 batters he faced while making his longest start of the season.

Raisel Iglesias pitched a 1-2-3 ninth to pick up his 20th save of the season.

Jose Iglesias doubled twice and scored a run and right fielder Adam Eaton singled, scored a run and also threw out a runner at second for Los Angeles. It marked just the third time this season that the Angels won a game scoring three runs or fewer.

Kenta Maeda (4-4) took the loss after allowing three runs on seven hits and no walks while striking out six. Willians Astudillo hit an RBI double for Minnesota, which had a four-game home winning streak snapped and fell to 2-6 since the All-Star break.

The Angels are 2-4 since the break.

Minnesota jumped out to a 2-0 lead in the fourth inning. Miguel Sano led off with a ground-rule double into the bullpen in left-center and then stole third with one out. After Trevor Larnach walked, Astudillo lined a double down the right field line to drive in Sano. Larnach then scored on a groundout by Gilberto Celestino. 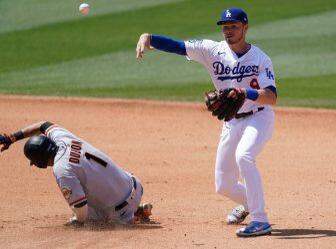 Los Angeles rebounded to take a 3-2 lead in the fifth. Iglesias started the rally with a one-out double down the left field line, and he advanced to third on a single by Eaton.

Mayfield, claimed off waivers from Seattle in mid-June, then lined his second homer of the season 370 feet into the bleachers in left. It was just the fourth home run of his three-season major league career.

Angels designated hitter Shohei Ohtani finished 0-for-4 with three strikeouts. He is 4-for-24 (.167) with 14 strikeouts since the All-Star break.

Jack Mayfield drove in four runs to lead the visiting Los Angeles Angels to a 9-3 win against the Chicago
MLB・5 DAYS AGO
fantasydata.com

Los Angeles Angels starting pitcher Reid Detmers (COVID-19) threw a simulated game on Saturday, according to Rhett Bollinger of MLB.com. Detmers has been on the injured list since August 25 after testing positive for COVID-19. Before landing on the IL, he posted a 7.11 ERA with 17 strikeouts over four starts and 19 innings. The simulated game keeps him on track to return to the team on September 25, which is when manager Joe Maddon expects him back. He'll most likely need to be stretched out before returning to the rotation, so it's unclear if he'll start again this season. Even if he does, he can be ignored in most leagues, but as the 24th overall prospect in baseball, according to MLB.com, he can continue to be stashed in dynasty leagues.
MLB・6 DAYS AGO
Island Packet Online

Who is the ‘most hated’ MLB team? Twitter map reveals the one fans despise the most

Thanks to Tuesday’s 3-2 win over the Atlanta Braves, the Los Angeles Dodgers are now closing in on the San Francisco Giants stronghold in the National League West. While this is happy dance-news for fans of the Dodgers, fans of other teams across the country appear to be scowling at the defending World Series champs, and one map proves it, multiple outlets including NBC 4 report.
MLB・20 DAYS AGO
chatsports.com

Video: Manny Machado Yells 'It's Not F--king About You' at Fernando Tatis Jr.

As the San Diego Padres continue to struggle, frustrations appear to be boiling over. On Saturday night, stars Manny Machado and Fernando Tatis Jr. were captured on video getting into it in the dugout, with the former yelling "It's not f--king about you" to his counterpart. Kevin Acee of the...
MLB・3 DAYS AGO
FanSided

St. Louis Cardinals: Matt Carpenter may be shoved out the door

Every player wants to have their career end on their own terms. They get that final shot at glory, being able to walk off the diamond while remaining a productive player, comfortable in the knowledge that they have nothing left. But there are others who find their careers have ended because they did not perform well enough to get another opportunity. That is what St. Louis Cardinals infielder Matt Carpenter is attempting to avoid.
MLB・7 DAYS AGO
Sportsnaut

St. Louis Cardinals pitcher Daniel Ponce de Leon and catcher Yadier Molina got into a heated conversation during Tuesday’s game against the New York Mets. The St. Louis Cardinals may not be in contention for the NL Central title, but they are tied with the San Diego Padres for the second NL Wild Card spot entering Tuesday night. The team can ill afford to make any mistake if they want to make a trip to the postseason.
MLB・7 DAYS AGO

One day after it appeared Shohei Ohtani might be done as a pitcher for the season, the Los Angeles Angels
MLB・3 DAYS AGO
Houston Chronicle

Shohei Ohtani is rewriting history books and redefining traditional limits placed on ballplayers. He does it all with a reverence and respect that’s won the admiration of Astros manager Dusty Baker, who acknowledged it’s “tough not to like” the 27-year-old Japanese superstar. “He’s tough not to like because anybody that...
MLB・11 DAYS AGO
Sportsnaut

Salvador Perez set a major league record for homers in a season by a primary catcher after launching a two-run
MLB・1 DAY AGO
ClickOnDetroit.com

DETROIT – It’s been about seven weeks since the Detroit Tigers sent Daniel Norris to the Milwaukee Brewers at the trade deadline. Let’s check in on how he’s doing for the NL Central leaders. Norris came into 2021 after back-to-back solid seasons while playing a variety of roles. He made...
MLB・7 DAYS AGO

Edmundo Sosa, Harrison Bader and Dylan Carlson each drove in two runs and the St. Louis Cardinals edged the visiting
MLB・2 DAYS AGO

Longtime Phillies announcer Larry Andersen has the reputation of telling fans what’s on his mind. And Tuesday night, that meant calling out everyone involved with the team, including slugger Bryce Harper. These days, Andersen calls games on the radio only when the team is playing at Citizens Bank Park. So...
MLB・6 DAYS AGO
Sportsnaut

White Sox reliever Mike Wright was ejected after throwing three straight pitches at Shohei Ohtani in the ninth inning. Ohtani has 44 home runs on the season — one off the MLB lead, which belongs to Vladimir Guerrero, Jr. and Salvador Perez. With the Angels up 9-3 in the ninth...
MLB・5 DAYS AGO