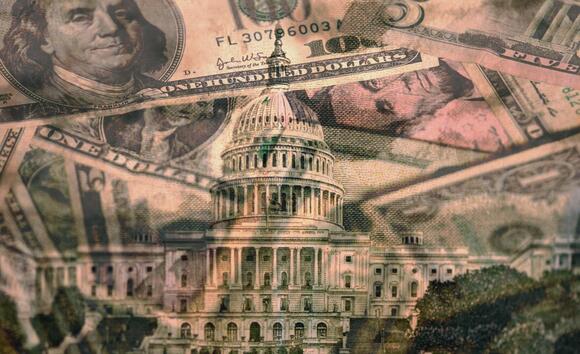 F or the past two years, the federal government has been unfettered in its ability to borrow all the money it needed to pay the nation’s bills.

Congress temporarily suspended the debt ceiling as part of the Bipartisan Budget Act of 2019, but the blank check is set to expire on July 31, leaving lawmakers to fight over how much to raise the borrowing limit, if at all.

Senate Republicans are threatening to vote against a debt ceiling increase and have called on Democrats to lift it unilaterally using a budgetary tactic called reconciliation, allowing certain legislation to pass with only a simple majority rather than the 60 votes needed for most other bills.

Republicans say they are unwilling to endorse a debt limit increase because Democrats are promoting a staggering spending spree that could ultimately cost more than $5 trillion and result in significant tax increases.

“I don’t think there is any appetite among our members to vote for a big increase in the debt limit when Democrats are in the process of adding so much to the debt,” Senate Minority Whip John Thune said. “My view is, the debt limit ought to ride on all the other stuff they want to do. I don’t think Republicans ought to enable them to spend trillions and trillions of dollars on things that are designed to grow government.”

Sen. Ron Johnson, a Republican from Wisconsin, said Congress has increased the debt ceiling nine times since he took office in 2011 and added $5 trillion in debt over the past 18 months.

“From my standpoint,” Johnson said this week, “if we increase the debt ceiling, we ought to have some measure of fiscal control.

Lawmakers have authored several measures aimed at reining in debt. For example, Sen. Mitt Romney, a Utah Republican, won the backing of a group of GOP and Democratic lawmakers for legislation that would work to make critical federal funds such as Medicare and the highway trust fund, which are running out of money, more solvent.

Johnson and several other GOP Senators introduced the Federal Debt Emergency Control Act, which would require the Office of Management and Budget to declare a “Federal Debt Emergency” when the federal debt exceeds 100% of the Gross Domestic Product and to return unspent federal funds to the Treasury.

Democrats rejected the Republican viewpoint on the debt, and many argue there should be no debt ceiling at all, which would end the regular partisan battles over the matter.

The federal government needs to borrow money to pay off bills, not to initiate new spending, Democrats argue, and Republican opposition risks putting the United States in default on its loans and running out of money to operate.

“This is no time to play games with keeping the government open,” Senate Majority Whip Dick Durbin, an Illinois Democrat, told reporters in the Capitol.

Senate Majority Leader Chuck Schumer lashed out at Republicans and Minority Leader Mitch McConnell on the Senate floor on Thursday for calling on Democrats to go it alone on raising the debt ceiling. Schumer declared the GOP was threatening to oppose paying off debt racked up during the Trump administration.

Some of the debt was added thanks to a trio of bipartisan COVID-19 aid measures passed during the Trump administration, as well as other spending prior to President Joe Biden’s time in office.

“The leader's statements on the debt ceiling are shameless, cynical, and totally political,” Schumer said of McConnell, a Kentucky Republican. “This debt is Trump debt. It's COVID debt. Democrats joined three times during the Trump administration to do the responsible thing. And the bottom line is that Leader McConnell should not be playing political games with the full faith and credit of the United States. Americans pay their debts.”

Democrats, who control majorities in the House and the Senate, will have to add the debt battle to their packed to-do list.

Party lawmakers are struggling to pass a $1.2 trillion infrastructure bill and are searching for consensus on a second $3.5 trillion spending package they hope to pass later in the year. Lawmakers must also find a way to fund the government after fiscal year 2021 spending expires on Sept. 30. The Senate is lagging behind on passing spending bills, which means a stopgap measure may be necessary.

The nonpartisan Congressional Budget Office delivered a bit of good news on the debt ceiling this week, telling Congress the Treasury can use extraordinary measures that will allow it to finance the government past the July 31 deadline, until October or November.

After that, the CBO warned, “the government would be unable to pay its obligations fully, and it would delay making payments for its activities, default on its debt obligations, or both.”

WASHINGTON, Sept 17 (Reuters) - President Joe Biden's top aides and local officials nationwide pleaded with U.S. lawmakers on Friday to resolve a government debt showdown that they warned could spark an economic crisis. Congress plans next week to consider legislation that would avoid a default ahead of an October...
CONGRESS & COURTS・1 DAY AGO
Los Angeles Times

Democrats' $3.5-trillion spending plan is about to get a trim. They should be happy

The $3.5-trillion spending plan that Democrats proposed is already being whittled down. That's good for the party. Voters prefer incremental change.
LOS ANGELES, CA・5 HOURS AGO
The Guardian

Top Democrats are expected to dare Republicans to block a stopgap funding measure, which would trigger the double-barreled fiscal crisis of the US defaulting on its mammoth debt and a shutdown of the federal government, according to two sources familiar with the proposal. The plan being considered by the House...
CONGRESS & COURTS・8 HOURS AGO
POLITICO

The two senators met Tuesday afternoon, after McConnell promised that no Republicans would support the legislation.
CONGRESS & COURTS・1 DAY AGO

Congress returns Monday facing decisions on voting rights, infrastructure and social programs while needing to raise how much the country can borrow.
CONGRESS & COURTS・7 HOURS AGO
AFP

US lawmakers will dive into the busiest legislative period in years in the coming week, with President Joe Biden counting on a united front from Democrats to pass make-or-break spending bills that he hopes will improve his sagging approval ratings. Facing stinging criticism over the chaotic US withdrawal from Afghanistan and a stubbornly elevated pandemic death toll, Biden is banking on going into next year's midterm elections with historic economic reforms under his belt. Avoiding a government shutdown is also at the top of the agenda, alongside dodging a catastrophic credit default, which may be the largest of the looming deadlines.
CONGRESS & COURTS・15 HOURS AGO
WashingtonExaminer

Subscribe to Fortune Daily to get essential business stories straight to your inbox each morning. The White House is warning state and local governments about severe cuts to disaster relief, Medicaid, infrastructure grants, school money and other programs if Congress fails to raise the U.S. debt limit. A fact sheet...
POTUS・2 DAYS AGO

The Filibuster’s Fate Is Already Decided. Just Look To The 2022 Democratic Senate Candidates.

The Senate’s filibuster rules requiring 60 votes to start or end debate on most legislation may survive this fall’s fight over voting rights legislation, but its future is bleak. Every Senate Democratic candidate running in an open-seat race or looking to unseat a sitting Republican senator has embraced filibuster reform in some fashion.
CONGRESS & COURTS・2 DAYS AGO
Newsweek

While Republicans are blaming Democrats for reckless spending, about $7.8 trillion of the overall national debt was accumulated under President Donald Trump.
PRESIDENTIAL ELECTION・2 DAYS AGO
Shore News Network

Majority Leader Steny Hoyer said Friday that the House would vote on a debt ceiling suspension and on the bipartisan infrastructure bill next week, even as Republicans vow to oppose raising the limit and Democrats’ $3.5 trillion budget, which progressives have tied to the infrastructure package, faces numerous setbacks. Hoyer...
CONGRESS & COURTS・1 DAY AGO
CNBC

Debt ceiling vs government shutdown: How they're different and why they matter

Congress faces two massive tasks over the next month: funding the U.S. government and increasing the debt ceiling. The federal government's fiscal calendar runs from Oct. 1 to Sept. 30, meaning a shutdown will occur if lawmakers don't pass a budget by the end of the month. Congress must suspend...
CONGRESS & COURTS・1 DAY AGO

Food Stamps, Medicaid Among Programs That Will Lose Funding if U.S. Debt Limit Not Raised

The Medicaid and food stamps programs are among those that could lose funding if Congress does not raise the U.S. debt limit, the White House warns, according to the Associated Press. Joe Biden has pressed for bipartisan action on increasing the limit on debt that was almost completely accumulated before...
U.S. POLITICS・2 DAYS AGO
Jano le Roux

Even as her party’s big spending plan faces opposition from key Democrats, Vice President Kamala Harris urged legislators on Wednesday to support legislation that she claimed would increase access to child care and boost the salaries of day-care workers.
3 DAYS AGO
POLITICO

The return to classrooms was supposed to be a turning point for women, whose participation in the labor force plunged to its lowest level in more than three decades during the pandemic.
CONGRESS & COURTS・1 DAY AGO
Fox News

President Biden's two major economic agenda items hang in the balance this week as Democrats continue "intense discussions" on their $3.5 trillion spending plan and some Republicans are warning that their support for the $1 trillion bipartisan infrastructure bill could evaporate Democrats ‘linked’ it with reconciliation. "It's gotten completely off...
CONGRESS & COURTS・1 DAY AGO

WASHINGTON (SBG) - Republicans say there is no way they will join to raise or suspend the debt ceiling, increasing the legal limit on the total amount of debt lawmakers borrow. “This is a unified Democrat government engaging in a partisan reckless tax spending spree. They will have to raise...
CONGRESS & COURTS・2 DAYS AGO
POLITICO

The House majority leader said Democrats will look to suspend the cap on how much money the government can borrow.
CONGRESS & COURTS・2 DAYS AGO
MarketWatch

Congress still hasn't raised the federal borrowing limit to prevent a U.S. default, even as the Treasury Department cautions that "cash and extraordinary measures" are most likely to run out next month.
WASHINGTON, DC・1 DAY AGO
Business Insider

McConnell is determined to resist Democratic pressure to raise the debt ceiling alongside them. The showdown could derail the economic recovery.
CONGRESS & COURTS・4 DAYS AGO