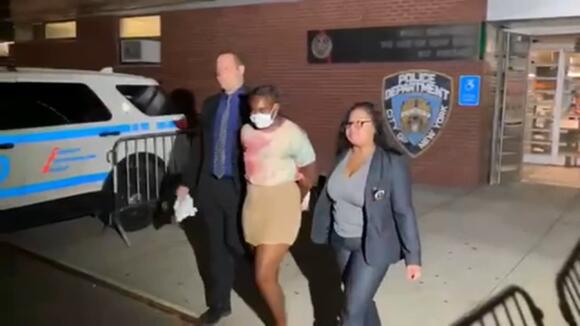 Kristin Thorne has more on the New Yorkers who are making the move to Florida.

Justin Soriano is accused of killing his pregnant ex-girlfriend Shanice Young in Harlem as she came home from her baby shower.
MANHATTAN, NY・13 HOURS AGO
ABCNY

BRONX (WABC) -- Police are searching for a man who threatened a little girl and her father on the subway in the Bronx. It happened on Sunday, September 5, at 3:20 p.m. on a D train. Authorities say it started when the 4-year-old girl's father asked the man to stop...
BRONX, NY・1 DAY AGO
ABCNY

In this Eyewitness News exclusive interview, the 28-year-old victim says he rear-ended a black Honda Fit Monday night in the Bronx.
BRONX, NY・1 DAY AGO
ABCNY

The men were struck when gunfire erupted on Lewis Avenue just after 5 a.m.
BROOKLYN, NY・21 HOURS AGO

Man hospitalized after being stabbed on subway platform in Midtown

The victim was standing on the southbound A train platform at the 42nd Street subway station at around 9:30 p.m.
MANHATTAN, NY・23 HOURS AGO
ABCNY

The mask-wearing suspects emerged from a dark colored SUV and descended on two men who were dining at different tables.
MANHATTAN, NY・8 HOURS AGO
ABCNY

The NYPD says the man hit the woman in the face, dragged her to a parking pay station, and then grabbed her purse and her Bible.
QUEENS, NY・2 DAYS AGO

Have you seen her? Police are searching for a missing woman last spotted leaving a hospital in Brooklyn on Monday.
BROOKLYN, NY・1 DAY AGO
ABCNY

The search continues for 22-year-old Gabby Petito, who disappeared on a cross-country road trip with her fiancé Brian Laundrie.
NORTH PORT, FL・11 HOURS AGO
ABCNY

Gabby Petito's boyfriend Brian Laundrie has officially been named a person of interest in her disappearance, and police say he is hindering the investigation.
SUFFOLK COUNTY, NY・1 DAY AGO
ABCNY

HARLEM, New York (WABC) -- Police have identified the suspected gunman in the fatal shooting of a pregnant woman killed while walking home from her own baby shower in Harlem early Sunday. Shanice Young, 31, was just weeks away from giving birth when she was shot in the head in...
MANHATTAN, NY・2 DAYS AGO

NYPD officer jumps out window, husband in custody after violent standoff with gunfire

The off-duty NYPD officer was taken to the hospital with injuries and her barricaded husband was taken into custody.
QUEENS, NY・2 DAYS AGO
ABCNY

A grand jury has decided not to indict a former NYPD officer charged with putting a man in a chokehold during an arrest in Queens in 2020.
PUBLIC SAFETY・2 DAYS AGO
ABCNY

Deliveryman and friend stabbed on Upper West Side

An unknown man approached the victim and said, "What are you doing here? This is our area."
UPPER WEST SIDE, NY・2 DAYS AGO
ABCNY

Investigators said there are several cameras with good quality footage showing the fleeing vehicle, the fight, and the suspects.
NEW YORK CITY, NY・11 HOURS AGO
ABCNY

Hours after the family of 22-year-old Gabby Petito issued a statement to the family of her fiancé, begging for information in her disappearance, a member of his family is speaking out.
CELEBRITIES・1 HOUR AGO
ABCNY

A school security officer went above and beyond to help a student who accidentally threw out a special pair of earrings.
ORANGE COUNTY, NY・2 DAYS AGO
ABCNY

The hostess of a restaurant on the Upper West Side was assaulted after asking three women from out of town to show proof of vaccination.
NEW YORK CITY, NY・8 HOURS AGO