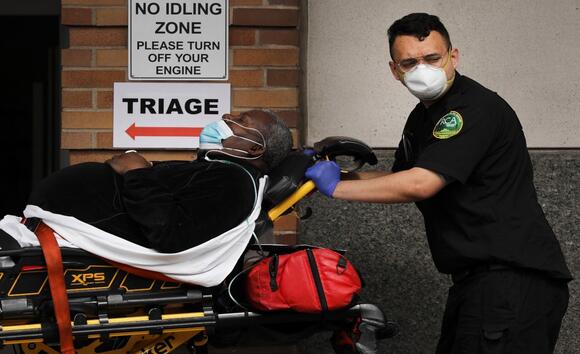 A Black unvaccinated couple who decided not to get the vaccine over concerns about the government’s Tuskegee study have died from COVID-19.

Martin and Trina Daniel, 53 and 49 respectively, died on July 6. They were married for 22 years and have two teenage children, WSBTV, Atlanta's ABC affiliate, reported.

The couple’s decision not to get the COVID-19 vaccine was reportedly influenced by the government’s syphilis experiments on Black men in the 1930s, which were conducted in Alabama and where Martin graduated college, according to the outlet.

Alabama also has the lowest percentage of fully vaccinated people. Mississippi, Arkansas, and Louisiana also have less than 36 percent of their residents are fully vaccinated.

Their deaths come as the delta variant has spread across the U.S. and is responsible for more than 80 percent of new coronavirus cases, as Changing America previously reported.

The Tuskegee study was a government-funded experiment from the 1930s to 1970s in search of a cure for syphilis, as well as to study if there were differences in symptoms among white patients and Black patients with late-stage syphilis.

Black participants, all of whom were Black men who worked as sharecroppers, were told if they allowed Public Health Service doctors to perform tasks on their existing syphilis they would receive free health care — but the Alabama government lied, and the experiment was regarded as an ethically abusive study, according to Examining Tuskegee: the infamous syphilis study and its legacy.

About 400 men presumed to be infected with syphilis were given placebos in the form of drugs and were falsely told they were receiving special treatment. But instead they endure painful procedures that tapped inside their spinal cords to investigate the disease's neurological consequences, TED Talk reported.

"In order to track the disease's full progression, researchers provided no effective care as the men died, went blind or insane or experienced other severe health problems due to their untreated syphilis," according to History.com.

Before whistleblowers had the chance to expose the injustice, "28 participants had perished from syphilis, 100 more had passed away from related complications, at least 40 spouses had been diagnosed with it and the disease had been passed to 19 children at birth."

"Just tying these two events together and understanding the historical context of what's going on, it really wears on me sometimes," said Cornelius Daniel, Martin's nephew.

The Daniels’ family has a GoFundMe to raise donations to assist two of their surviving children’s education fund. One is said to be entering college, and their “transition into a new norm.”

Stop!! Stop with color! Stop with personal choice! Stop saying someone is an anti- Vaxxer simply because the Vaccine is an EUA and the FDA has put in place rigorous testing and procedures that this vaccine needs to go through! This vaccine should not bypass what was put in place for the safety of the people. A choice to wait is their right. If that choice causes death either way, with or without the vaccine, it was their choice. Many people don’t trust the government and yet what have they done to gain that trust? Nothing! How about reverse the 1986 law absolving all liability from drug manufacturers to start??? Why is this so hard? Why can’t you stand beside what you created? Oh wait, let’s give a free donut everyday for those vaccinated! Th ya will gain their trust!!

I can understand why the African American community are afraid of getting shots by the government. with the way that the African American communities have been treated especially in the south is completely wrong. it's sad that it comes to the point where the community itself is afraid of getting shots because they don't know what's really in them. my deepest sympathies go towards the family.

Your an adult you make up your mind as for me I had covid and as both I and my friends and families thought it would be my death due to my age and copd issues. I had it with just lose of taste and smell for 2 days no other symptoms. GOD hasn't called for me yet and no I will not take the vaccine never took any vaccine and never got the flu that I was aware of. Just like the yearly flu some will get sick, some won't.

Has Anyone Died After Receiving The COVID-19 Vaccine?

What are your questions about the coronavirus vaccine?. Ideastream Public Media's health team is answering as many questions as possible, with help from local experts in a range of fields. You can send us your questions with our online form, through our social media group, or call us at 216-916-6476. We'll keep the answers coming on our website and on the air.
PUBLIC HEALTH・10 DAYS AGO
Business Insider

A massive study from Israel suggests older adults were far less likely to develop severe COVID-19 after a booster shot, but the finding carries major limitations

People in the U.S. who received Moderna’s or Pfizer’s COVID-19 vaccine will be eligible for a booster dose in September

Federal health officials said Wednesday that a third dose of the COVID-19 shots developed by Moderna and Pfizer will be available in mid-September for Americans who have been fully vaccinated for at least eight months.
PUBLIC HEALTH・28 DAYS AGO
MSNBC

From her hospital bed, Sheri Wise went on Facebook to contemplate what went wrong. Wise, 66, wrote that she “had done everything right,” from getting fully vaccinated early in the pandemic to mask wearing to avoiding touching people. “Haven’t hugged my mom in 16 months,” she noted. The one thing...
PUBLIC HEALTH・2 DAYS AGO
People

"She was vaccinated but was infected by others who chose not to be. The cost was her life," Candace Cay Ayers' family wrote in her obituary. The family of a 66-year-old woman who died of a breakthrough COVID-19 infection included a powerful message in her obituary for people who have chosen not to get the vaccine.
FAMILY RELATIONSHIPS・1 DAY AGO
The Independent

A four-year-old girl has become the youngest Covid-19 victim in Texas’s Galveston County since the onset of the pandemic, after several members of her family were infected.Kali Cook died in her sleep at home on 7 September, within hours of showing symptoms of the coronavirus. She was unvaccinated, with children below the age of 12 not yet eligible for inoculation.Her mother Karra Harwood, however, was also not jabbed and described herself as against vaccination. “I was one of the people that was anti, I was against it. Now, I wish I never was,” she told The Daily News.Kali’s death comes...
PUBLIC HEALTH・5 DAYS AGO
cbslocal.com

CHARLESTON, W.Va. (AP) — West Virginia hospitals continue to be overrun with COVID-19 patients as the number of people seeking treatment for the virus hit a record of 893 on Wednesday, officials said. That’s 41 more than Monday’s record and is up from the total of 52 people hospitalized for...
PUBLIC HEALTH・2 DAYS AGO

In one of the couple's last YouTube videos, Dusty Graham said the COVID vaccine was "technically not" a vaccine. He died of the disease on Thursday.
ALABAMA STATE・1 DAY AGO
Business Insider

"Despite everything that could possibly be done for her, she's going to lose her battle and lose her life," Dr. Nicole Linder said.
MICHIGAN STATE・7 DAYS AGO
Oak Ridger

What one Tennessee doctor has to say to patient who continually refuse the COVID-10 vaccine. As schools resume and flu season looms over an ever-intensifying COVID-19 pandemic, many Tennessee doctors are voicing frustration with unmanageable caseloads. But Dr. Mike Green, a pediatrician and internist at Trinity Medical Associates in Knoxville,...
TENNESSEE STATE・9 DAYS AGO
AOL Corp

Another conservative talk radio host who urged listeners to boycott the COVID-19 vaccine has died from the disease caused by exposure to the coronavirus. Bob Enyart, a Denver radio host and pastor, died two weeks after he and his wife were hospitalized with what his church called "severe" cases. He was 62.
PUBLIC HEALTH・3 DAYS AGO

The Royal College of Nursing has written to a hospital trust in the South of England to express a range of concerns about its decision to redeploy nurses who declined the Covid-19 vaccine to non-patient facing roles. University Hospital Southampton NHS Foundation Trust has this week confirmed that a “small...
WORLD・8 DAYS AGO
KCEN

U.S. Health and Human Services says doctors can no longer order the drugs directly, and the state will take over distribution due to a shortage.
TEXAS STATE・2 DAYS AGO
FOX6Now.com Milwaukee

Army: ‘Relief of duties, discharge’ possible for those who refuse COVID-19 vaccine

The U.S. Army announced Tuesday a COVID-19 vaccine mandate for soldiers was being implemented, and warned that members who refuse could be subject to "relief of duties" or "discharge." The Army began implementing the secretary of defense’s order last month, following full approval of Pfizer’s two-dose shot by the Food...
PUBLIC HEALTH・3 DAYS AGO
Complex

Kodak Black’s philanthropic mission continues. According to TMZ, the controversial rapper has made a generous donation to the child of Jennifer Sepot, the 27-year-old Fort Lauderdale officer who died from COVID-19 complications last month. Black’s attorney, Bradford Cohen, said his client had learned about Sepot’s death in a news article and was particularly moved by the tragedy because he, too, has suffered from the disease.
ADVOCACY・9 DAYS AGO
ktbb.com

Why some US Blacks and Latinos remain COVID-19 ‘vaccine deliberate’

(NEW YORK) -- Much has been made about people of color being hesitant to get a COVID-19 vaccine. Numbers have shown that Black and Latino vaccination rates are lagging behind those of white people in America. About 40% of Black people and 45% of Latinos have been at least partially...
PUBLIC HEALTH・12 DAYS AGO
Tulsa World

Editorial: Get a vaccine to honestly honor those who died from COVID-19

Each day another story surfaces of a once healthy person struck down by COVID-19. Those are firefighters, law enforcement officers, teachers, lawmakers and people from all walks of life. Each left communities grieving. Tributes found online contain an outpouring of emotion with remembrances of full lives of family, friends and...
PHARMACEUTICALS・2 DAYS AGO
TheWrap

The man who organized the petition behind the attempt to recall California Gov. Gavin Newsom is sick with COVID-19 after — you guessed it — having previously refused to get vaccinated. Orrin Heatlie, a retired Yolo County sheriff’s sergeant, told The Sacramento Bee that his symptoms aren’t serious enough to...
PUBLIC HEALTH・10 DAYS AGO