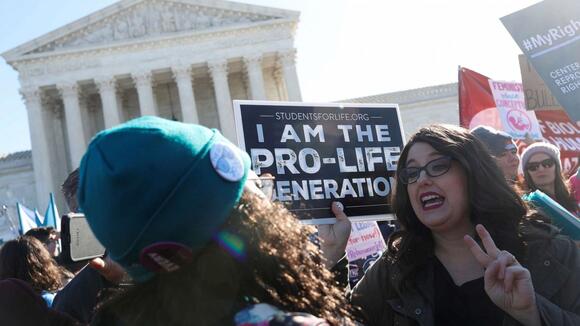 The state of Mississippi formally asked the U.S. Supreme Court Thursday to uphold its ban on abortions after 15 weeks of pregnancy and overturn Roe v. Wade, the landmark 1973 decision that gave women the unfettered right to end a pregnancy before a fetus is viable outside the womb.

"Under the Constitution, may a State prohibit elective abortions before viability? Yes. Why? Because nothing in constitutional text, structure, history, or tradition supports a right to abortion," the state says bluntly in its opening brief in a blockbuster case that will dominate the court's next term.

The cascade of arguments Mississippi lays out constitute the most direct and aggressive attack on abortion rights in years before the high court.

Republican Attorney General Lynn Fitch, leading the case, declares outright that the time has come for the justices to discard long-standing precedent because Roe and Casey, a 1992 decision that reaffirmed the right to abortion access for women, are "egregiously wrong."

"Roe and Casey are unprincipled decisions that have damaged the democratic process, poisoned our national discourse, plagued the law -- and, in doing so, harmed this Court," the brief says.

Mississippi argues that states have compelling interests in protecting the lives of the unborn -- interests that have been neglected, it claims, by decades of flawed legal analyses by the court's majority.

"Scientific advances show that an unborn child has taken on the human form and features months before viability. States should be able to act on those developments. But Roe and Casey shackle States to a view of the facts that is decades out of date."

"Their goal is for the Supreme Court to take away our right to control our own bodies and our own futures -- not just in Mississippi, but everywhere," said Nancy Northup, president and CEO of the Center for Reproductive Rights, which is challenging the law, in a statement.

"Let’s be clear; any ruling in favor of Mississippi in this case overturns the core holding of Roe -- the right to make a decision about whether to continue a pregnancy before viability," she continued. "The Court has held that the Constitution guarantees this right. If Roe falls, half the states in the country are poised to ban abortion entirely. "

The Supreme Court has not yet scheduled the case for oral argument in the term set to begin in October. A decision is expected by June 2022.

Can Roe v. Wade be saved? She’s among a group making a case to the Supreme Court.

A prominent Northeastern University legal scholar joined the fight to preserve access to abortions this week, filing a brief that urges the Supreme Court to uphold Roe v. Wade amid growing conservative momentum to upend the 1973 ruling. Martha F. Davis, who teaches constitutional law and human rights advocacy at...
CONGRESS & COURTS・1 DAY AGO
The Independent

Georgia abortion law to be argued in federal appeals court

A federal appeals court plans to hear arguments Friday on whether it should overturn a lower court ruling that permanently blocked a restrictive abortion law passed in Georgia in 2019.The hearing comes amid a heightened focus on abortion with the U.S. Supreme Court earlier this month allowing a similarly restrictive Texas law to take effect. The justices also plan to hear arguments in December on Mississippi s attempt to overturn the high court's decisions in Roe v. Wade and Planned Parenthood v. Casey, which affirmed the right to an abortion.The Georgia law would have banned most abortions once...
CONGRESS & COURTS・1 DAY AGO
Idaho8.com

How the Supreme Court crafted its Roe v. Wade decision and what it means today

The Supreme Court‘s landmark decisions guaranteeing a constitutional right to abortion emerged only after surprise votes and last-minute compromises. They were also the product of individual soul-searching and broad regard for the court. And, perhaps reflecting a different era, they were steered by Republican appointees who believed privacy rights covered a woman’s decision to end a pregnancy.
CONGRESS & COURTS・1 DAY AGO
Daily Mail

20% of Americans are in favor of overturning Roe v Wade, new poll claims

Americans around the country have little desire for the Supreme Court to overturn Roe v. Wade, with just 20 percent of respondents calling for the reversal of the landmark 1973 decision in a recent poll. The survey by the centrist Marquette Law School, released Wednesday, comes on the heels of...
CONGRESS & COURTS・2 DAYS AGO

Commentary: This week, U.S. Representative Melanie Stansbury (N.M.-01) joined 236 lawmakers in the U.S. House of Representatives and Senate in filing a bicameral amicus brief urging the Supreme Court to uphold nearly 50 years of precedent in Roe v. Wade, after the Court decided to hear a challenge in the case of Dobbs v. Jackson Women’s Health Organization. 188 Democrats in the House and 48 in the Senate joined in filing the amicus in support of women’s reproductive rights with the Court.
DOÑA ANA COUNTY, NM・2 DAYS AGO
atlantatribune.com

Groups Call On Supreme Court to Strike Down Attack on Roe v. Wade

Civil Rights Groups Call On Supreme Court to Strike Down Mississippi’s Attack on Roe v. Wade. State law would have devastating impact on Black and Brown communities. A Mississippi law banning abortions after 15 weeks will have a devastating impact on women with low incomes and Black women, according to an amicus brief filed in Dobbs v. Jackson Women’s Health by the Lawyers’ Committee for Civil Rights Under Law, The Leadership Conference on Civil and Human Rights, and 16 other prominent civil rights organizations on Monday.
CONGRESS & COURTS・3 DAYS AGO
WTNH.com

The federal government urged the Supreme Court to reaffirm the right to an abortion and strike down Mississippi’s ban on abortions after 15 weeks. If “States are permitted to ban pre-viability abortion, the effects are likely to be felt most acutely by young women, women of color, and those of lesser means, further diminishing their opportunities to participate fully and equally in the Nation’s social and economic life,” the government said in its brief filed Monday.
CONGRESS & COURTS・3 DAYS AGO

The U.S. Supreme Court announced Monday that it will hear oral arguments in a Mississippi challenge to Roe v. Wade, the 1973 landmark ruling that effectively legalized abortion in America, on Dec. 1.
CONGRESS & COURTS・4 DAYS AGO
NBC News

The justices will hear the term's major challenge to the Supreme Court's abortion rights precedents on Dec. 1. Julie Rikelman, senior litigator director of the Center for Reproductive Rights, will argue against Mississippi's 15-week abortion ban. Jeffrey Fisher and Anton Metlitsky of O'Melveny & Myers have joined the defense of...
CONGRESS & COURTS・4 DAYS AGO
Reuters

WASHINGTON (Reuters) - Abortion rights advocates on Monday urged the U.S. Supreme Court not to overturn the Roe v. Wade ruling that legalized abortion nationwide - a 1973 landmark imperiled in the legal fight over Mississippi’s attempt to ban the procedure after 15 weeks of pregnancy. “The fallout would be...
CONGRESS & COURTS・11 DAYS AGO

The Supreme Court has only itself to blame

A raft of recent polls shows that the Supreme Court has lost stature in the eyes of the public. Most dramatically, a Marquette University Law School poll finds the court’s approval dropping from 66 percent a year ago (and 60 percent as recently as July) to 49 percent. In the wake of the court’s decision to unabashedly rewrite Section 2 of the Voting Rights Act and to duck ruling on the Texas abortion bounty law, Democratic support plunged from 59 percent in July to 37 percent.
CONGRESS & COURTS・1 DAY AGO
Reason.com

Now That Opponents of the Texas Abortion Ban Are Using Its Provisions To Defeat It, Pro-Life Activists Are Crying Foul

S.B. 8, a Texas law that took effect at the beginning of this month, authorizes "any person" to sue "any person" who performs an abortion after fetal cardiac activity can be detected, facilitates it, or "intends" to do so. Plaintiffs, who are promised at least $10,000 in "statutory damages" per abortion plus compensation for their legal expenses if they win, need not live in Texas or allege any personal injury or interest. The only limitation is that they cannot be state or local officials, who are explicitly barred from trying to enforce the law.
CONGRESS & COURTS・1 DAY AGO
El Paso News

EL PASO, Texas (KTSM) — The Texas abortion ban is making its return to the U.S. Supreme Court. On Thursday, a broad coalition of abortion providers and others women’s reproductive rights activists asked SCOTUS to expedite next steps in the case in challenging Texas’ Senate Bill 8 (SB 8), which implements a near-total abortion ban in the state afte six weeks of pregnancy.
TEXAS STATE・1 DAY AGO
Michigan Advance

The Eighth Circuit U.S. Court of Appeals' full bench of judges heard arguments on Missouri's law banning abortions at or after eight weeks of pregnancy Tuesday in St. Louis. Attorneys representing the state have zeroed in on a provision of the 2019 law that makes abortions due solely to prenatal Down syndrome diagnoses illegal. Planned Parenthood, which sued Missouri when it enacted the law, maintained that it was unconstitutional and should be blocked by the court.
MISSOURI STATE・3 DAYS AGO
The Conversation U.S.

It is a central principle of law: Courts are supposed to follow earlier decisions – precedent – to resolve current disputes. But it’s inevitable that sometimes, the precedent has to go, and a court has to overrule another court, or even its own decision from an earlier case. In its...
CONGRESS & COURTS・4 DAYS AGO
Fox News

Justice Clarence Thomas became the latest member of the U.S. Supreme Court to take aim at the media, defending the court as nonpartisan Thursday as he warned against "destroying our institutions because they don't give us what we want, when we want it," according to reports. "I think the media...
TEXAS STATE・8 DAYS AGO
USA TODAY

The providers have asked the high court not to wait for a lower court to resolve their challenge to a controversial Texas law limiting the procedure.
TEXAS STATE・1 DAY AGO