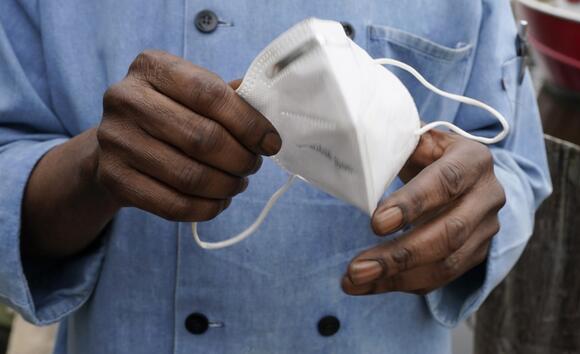 President Joe Biden vowed people could either be “vaxxed or masked." But as the delta coronavirus variant surges nationwide, some are urging a stronger review of federal health guidelines over mask-wearing.

Biden aides have refrained from questioning the health guidance of top officials. When the Centers for Disease Control and Prevention said vaccinated people could forgo masks earlier this year, the White House quickly embraced the change.

In a ceremony at the White House Rose Garden, Biden celebrated the repeal, stating if you are fully vaccinated, “You no longer need to wear a mask.”

But surging COVID-19 cases and hospitalizations have thrown the decision into question. Top Biden aides and officials are back at the drawing board weighing federal masking guidance, sources told the Washington Post .

One idea discussed by officials involved asking both vaccinated and unvaccinated people to wear masks when spending time indoors or in public areas.

Still, the White House remains averse to policy ideas requiring people to prove their vaccination status, a source familiar with the talks told the outlet.

During a briefing with reporters on Thursday, press secretary Jen Psaki called the report “breathless” and said discussions were a regular order of business, not necessarily a response to the spike in cases.

“We are regularly in touch and have regular meetings with our public health officials, including the CDC, about how to continue to address the virus. That shouldn't surprise anyone,” she told reporters on Thursday.

Psaki stressed current guidelines were still in place, even as the delta variant now accounts for 83% of cases nationwide.

“We want to be clear to the public. Nobody is being advised, who's vaccinated, to wear a mask,” she said.

“He doesn't have to go to Congress,” Banzhaf said. “[Biden] said himself, ‘I will do everything possible from an executive standpoint to make it required that people have to wear masks in public.’ He has not done that.”

Vaccination hesitancy is still a challenge for the administration, which is struggling to increase uptake of the shots.

Officials have heaped blame on social media companies for failing to police misinformation about vaccines spreading on their platforms.

“Certainly using the legal definition, he is killing people by not having the guts to take the effective action, which he promised the American public to do,” Banzhaf said. “He is killing Americans and will continue to kill Americans.”

Public campaigns to boost uptake have also failed, he said.

"We know that the government urging from Biden to [Dr. Anthony] Fauci, to half a dozen other government officials, hasn't been effective. Even many of these programs, where they are using rock stars and athletes in [public service announcements], haven't been effective," Banzhaf added. "Because you've got 40% of healthcare workers that are not vaccinated."

In Florida, Republican Gov. Ron DeSantis has earned plaudits for charting his state's path on the coronavirus.

On Thursday, he urged state vaccinators to get more shots into arms while rejecting the idea of mask mandates in schools — another area that intensely divides advocates.

During a CNN town hall on Wednesday, Biden urged caution for those without the shot.

“We have a pandemic for those who haven’t gotten a vaccination,” he said.

For Banzhaf, who spearheaded a national shift on smoking, this isn't enough.

“He said he was going to do everything possible from an executive standpoint to make it required that people had to wear masks in public," Banzhaf said. "And yet, he has not done this.”

It’s not just Republicans. Everyone’s mad at Biden over migration.

The president’s border troubles aren’t going away anytime soon. They’re a symptom of a hemisphere in crisis.
PRESIDENTIAL ELECTION・23 HOURS AGO
WashingtonExaminer

The Biden administration has come out against an amendment to the defense budget that would prevent the Pentagon from dishonorably discharging service members who refuse to receive the COVID-19 vaccine.
U.S. POLITICS・17 HOURS AGO
WashingtonExaminer

New Gallup low for Biden, even below Harris

Tucker Carlson: Joe Biden revealed why he supports illegal immigration in 2015, he wants to change the country

You’ve got to ask yourself, as you watch the historic tragedy that is Joe Biden’s immigration policy, what’s the point of this? Nothing about it is an accident, obviously. It is intentional. Biden did it on purpose. But why? Why would a president do this to his own country? No sane, first-world nation opens its borders to the world. Promising the poorest people on the planet that they can have endless free, taxpayer-funded services if they show up and break your laws isn’t just stupid. It’s suicidal. For generations, middle-class Americans had access to the best health care in the world. But not anymore. That’s over for good. Our system can’t handle this many destitute newcomers. Imagine what hospitals are going to look like a year from now? How about the schools? What Joe Biden is doing now will change this country forever. So, again, why’s he doing it?
PRESIDENTIAL ELECTION・6 HOURS AGO

COVID vaccine mandates are here. Here's everyone who needs proof of vaccination

For the most up-to-date news and information about the coronavirus pandemic, visit the WHO and CDC websites. Since President Joe Biden announced COVID-19 vaccine mandates on Sept. 9, there have been several challenges to the plan from congressional Republicans as well as local and state officials. The new White House policy would mandate vaccines for all federal employees and contractors who do business with the federal government, as well as for health care workers at Medicare and Medicaid facilities. Additionally, the plan directs the Labor Department to require all businesses with 100 or more employees to ensure that their workers are either vaccinated or tested weekly.
PHARMACEUTICALS・16 HOURS AGO
Fox News

The Biden administration has been ensnared once again by another crisis at the southern border, this time with thousands of Haitian migrants near Del Rio, Texas. The state’s governor, Greg Abbott appeared on "The Ingraham Angle" to discuss the situation. GOV. GREG ABBOTT: "The Biden administration refuses to even pretend...
DEL RIO, TX・2 DAYS AGO
Business Insider

San Francisco London Breed defended herself for taking photos maskless in a nightclub without a mask despite the city's indoor mask mandate.
PUBLIC HEALTH・2 DAYS AGO
WashingtonExaminer

House Democrats introduced legislation on Tuesday that aims to curb presidential powers by addressing a laundry list of issues and complaints that came up during former President Donald Trump’s norm-shattering presidency.
PRESIDENTIAL ELECTION・1 DAY AGO

Biden’s vaccine requirements were issued in the form of an executive order – directives that only apply to the executive branch.
U.S. POLITICS・2 DAYS AGO
MSNBC

August 2021 will probably be remembered as the month when Joe Biden's presidency was holed below the waterline. September is the month when it started to sink. Biden is beset by several disasters at once. All the blame is his, for they flow from his dumb, stubborn, and ideological moves immediately after he was sworn in. First, his border crisis has graduated into a catastrophe.
PRESIDENTIAL ELECTION・2 DAYS AGO
Newsweek

There was a chance that President Joe Biden would end a streak dating back to Bill Clinton of new presidents losing control of Congress in their first two years.
PRESIDENTIAL ELECTION・2 DAYS AGO
Fox News

Nearly a year after the New York Post Hunter Biden laptop story that Big Tech companies suppressed weeks ahead of the 2020 presidential election, Politico reported Tuesday it had in part confirmed the authenticity of the material. "A person who had independent access to Hunter Biden’s emails confirmed he did...
PRESIDENTIAL ELECTION・1 DAY AGO
POLITICO

“If any member of Congress is not concerned that this could fall apart, they need treatment,” said Rep. Emanuel Cleaver (D-Mo.).
PRESIDENTIAL ELECTION・1 DAY AGO
Washington Post

Former Missouri governor Eric Greitens (R), who is running for Senate, said Tuesday that if he wins next year, he will not support Senate Minority Leader Mitch McConnell (R-Ky.) as former president Donald Trump tries to oust the GOP party leader. Since announcing in March that he will run for...
PRESIDENTIAL ELECTION・1 DAY AGO

Schumer calls on Biden to cancel $50,000 in student debt for all

At a virtual summit on student debt, Senate Majority Leader Chuck Schumer renewed his call for President Joe Biden to cancel debt through executive action. For those who view Schumer as a more moderate Democrat, his advocacy on the issue has come as a surprise. He's also taking a different...
CONGRESS & COURTS・1 DAY AGO
WashingtonExaminer

President Joe Biden is facing a downturn with voters that could hurt Democrats in electoral races and collapse the party's congressional majority in the midterm elections, according to pollsters and strategists.
PRESIDENTIAL ELECTION・1 DAY AGO
TheAtlantaVoice

When President Joe Biden mounts the iconic green marble rostrum inside the hall of the United Nations General Assembly on Tuesday, he will face an audience skeptical he really is as different from his predecessor as he likes to claim. For world leaders who were alternately addled and amused by former President Donald Trump — who once encountered mocking laughter […]
PRESIDENTIAL ELECTION・2 DAYS AGO
WashingtonExaminer

EXCLUSIVE — Ohio Republican Rep. Bob Gibbs introduced articles of impeachment against President Joe Biden on Tuesday, citing his handling of the U.S.-Mexico border situation, attempt to expand the federal moratorium on evictions, and the withdrawal of U.S. troops from Afghanistan.
CONGRESS & COURTS・1 DAY AGO