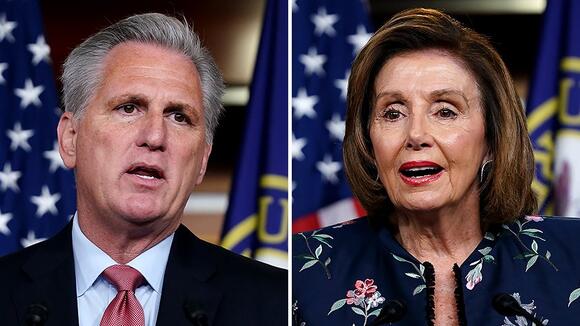 House Democrats are plowing ahead with their investigation into the Capitol attack on Jan. 6, brushing off the boycott from GOP leaders and weighing the addition of other Republicans to help negate criticism that the panel will be overly partisan.

The eight members of the select committee examining the siege huddled for more than an hour Thursday in Speaker Nancy Pelosi ’s (D-Calif.) office — a strategizing session ahead of the panel’s first hearing next week — as they consider whether to boost their GOP roster beyond Rep. Liz Cheney (Wyo.).

That topic wasn’t mentioned during the meeting, several participants said. But the select committee’s chairman, Rep. Bennie Thompson (D-Miss.), confirmed that GOP Rep. Adam Kinzinger (Ill.) could be invited to serve on the panel. Kinzinger is a centrist who, like Cheney, voted to impeach former President Trump for his role in inciting the insurrection and has been critical of GOP leaders for advancing Trump’s lies about the results of last year’s presidential election.

"We have positions for 13 people, and I hope we can ultimately get all of them," he said.

Thompson did not make specific endorsements — "I'm just the mere chairman of the committee,” he quipped — but gave a glowing review of Kinzinger's character.

"He's a fine person, level-headed, and wants to get to the facts," Thompson said.

Pelosi, for her part, said a number of Republicans have expressed interest in joining the panel. She also declined to name names, but when asked if she thought Kinzinger would be a good addition, Pelosi said: “Everybody else does.”

No decision has been made yet, and Kinzinger’s office didn’t immediately return a request for comment on Thursday.

“We’re not going to trust a bunch of politicians who are trying to get reelected or elected into leadership positions,” said Rep. Jaime Herrera Beutler (R-Wash.).

Leaders of the committee, meanwhile, are busy hiring staff, and Thompson said some aides will likely be Republicans. Cheney hinted at one possible GOP hire. She expressed support for former Rep. Denver Riggleman (R-Va.), who lost his GOP primary last year and has also been critical of his party’s spread of false claims, to serve as an adviser to the panel.

“I think that Denver has a really interesting and important skill set that would be a tremendous benefit,” Cheney said.

McCarthy, meanwhile, blasted the panel as a partisan “sham” after announcing the day before that he was yanking all five of his GOP picks for the panel in response to Pelosi refusing to allow two of them to be appointed.

“From what the Speaker has done, that puts a great deal of doubt in it,” McCarthy said Thursday of the select committee.

Pelosi maintained that it would have been “ridiculous” to allow two of McCarthy’s picks, Reps. Jim Jordan (Ohio) and Jim Banks (Ind.), to serve on the panel given their particularly close alliances with Trump and string of statements obfuscating the former president’s role on Jan. 6.

She pointed to Banks issuing a statement earlier this week vowing to investigate the Biden administration’s role in Jan. 6 — even though Trump was still in office that day — while making no mention whatsoever of the former president. Banks also arranged a recent trip with Trump to the southern border, where GOP lawmakers were accompanied by a conservative activist who had stormed the Capitol on Jan. 6.

“I think that, just to take this to an end, these people are going to act up, cause a problem. And people said to me, ‘Put them on and then when they act up, you can take them off.’ I said, ‘Why should we waste time on something as predictable?’ ” Pelosi said.

Some Republicans have lashed out at Cheney — who was booted from GOP leadership in May for refusing to stay quiet about her criticisms of Trump — for further demonstrating party disloyalty by accepting a committee slot from Pelosi.

Republicans such as Rep. Marjorie Taylor Greene (Ga.), a top Trump ally, even suggested Wednesday that Cheney should join the Democratic Party altogether for defending Pelosi’s decision to reject some of McCarthy’s appointees.

McCarthy didn’t rule out the possibility of the GOP conference stripping Cheney of her one committee assignment, a seat on House Armed Services, that was allotted by the party.

“I think it's a conference decision, and [the] conference will look at it,” McCarthy said.

Tuesday’s inaugural hearing will feature emotional testimony from Capitol Police and Metropolitan Police officers who defended the Capitol on Jan. 6 from the mob of Trump’s supporters attempting to stop Congress from ratifying the 2020 election results.

“It's going to be an opportunity for the country to hear from some of the very brave people who defended the Capitol on that day, to hear their experiences directly, to put some facts on the table, in particular, to counter some of the attempts of at whitewash[ing] that have been going on and to help the American people hear from the perspective of some of the people who put their lives on the line to defend and fight for all of us,” Cheney said after exiting Thursday’s meeting in Pelosi’s office.

The committee has not yet decided the topic or timing of the next hearing, Thompson said.

House Speaker Nancy Pelosi mocked the possibility of former President Donald Trump running again in 2024. The California Democrat made jabs at Trump during an event at Cambridge University on Thursday when talking about the Jan. 6 riot at the Capitol. "I reference him from time to time as 'What's-his-name,'"...
PRESIDENTIAL ELECTION・1 DAY AGO
WEKU

To Retake Congress, The GOP Plans To Attack Democrats On The Economy

For now Republicans' 2022 midterm election message could be summed up by an old slogan used in the 1990s by Democrats: "It's the economy, stupid." GOP lawmakers in recent weeks have piled on the Biden administration for the chaotic and deadly withdrawal from Afghanistan, and argued it has failed to respond sufficiently to the continuing pandemic the president had vowed to get under control.
PRESIDENTIAL ELECTION・1 DAY AGO
Newsweek

"It is time for the Republican Party to denounce militia-ism," the GOP lawmaker urged.
CONGRESS & COURTS・1 DAY AGO

House Transportation Committee Chairman Peter DeFazio is being accused of breaking a key pledge that President Biden made to Senate lawmakers to secure passage of his bipartisan $1.2 infrastructure bill. Mr. DeFazio, Oregon Democrat, is maneuvering to include pet projects and partisan priorities within Mr. Biden‘s $3.5 trillion expansion of...
CONGRESS & COURTS・1 DAY AGO
Reuters

WASHINGTON, Sept 16 (Reuters) - Mitch McConnell, the Senate's top Republican, has told Treasury Secretary Janet Yellen that congressional Democrats will have to raise the U.S. debt ceiling on their own, even as she warns of a default and new financial crisis if lawmakers do not raise the federal borrowing limit.
CONGRESS & COURTS・1 DAY AGO
POLITICO

His economic agenda on the line, Biden prepares to fight for tax increases on the wealthy

After a rough summer, President Joe Biden is getting ready to spend the autumn fighting for tax increases on the wealthiest Americans and corporations. The surge of the Covid-19 delta variant, the U.S. withdrawal from Afghanistan, hurricanes, wildfires, evictions and inflation have all battered Biden's approval ratings and exhausted White House aides.
PRESIDENTIAL ELECTION・1 DAY AGO

MONTGOMERY — State Rep. Steve Clouse, R-Ozark, who is set to sponsor the new prison-building legislation for a likely special session, said about 70% of House Republicans were responding positively to the bill as of Tuesday afternoon. “It is very, very encouraging,” Clouse said. There are 77 members of the...
MONTGOMERY, AL・1 DAY AGO
POLITICO

The moderates' stand could complicate Democrats’ push to reform a slew of federal health programs as part of their $3.5 trillion bill.
CONGRESS & COURTS・2 DAYS AGO
Washington Post

Once again, the GOP’s answer is ‘no.’ Democrats should take it and run.

Sen. Amy Klobuchar (D-Minn.) in a statement on Tuesday announced a compromise voting reform bill supported by Democratic Sens. Tim Kaine (Va.), Angus King (I-Maine), Joe Manchin III (W.Va.), Jeff Merkley (Ore.), Alex Padilla (Calif.), Jon Tester (Mont.) and Raphael G. Warnock (Ga.). The legislation, she said, would “set basic national standards to make sure all Americans can cast their ballots in the way that works best for them, regardless of what Zip code they live in.”
CONGRESS & COURTS・2 DAYS AGO
POLITICO

Lobbyists for business interests are confident they can fight off parts of House tax proposal they find most threatening.
AGRICULTURE・1 DAY AGO

One side is energized by the prospect of the greatest expansion of government support since the New Deal nearly a century ago. The other is fearful about dramatically expanding Washington's reach at an enormous cost.They're all Democrats Yet each side is taking vastly different approaches to guiding the massive $3.5 trillion spending bill through Congress.The party is again confronting the competing political priorities between its progressive and moderate wings. The House version of the bill that was drafted this week ushered in a new phase of the debate that could test whether Democrats can match their bold...
CONGRESS & COURTS・1 DAY AGO
POLITICO

Democratic leaders are actively discussing attaching an increase to the national debt limit onto a must-pass spending bill to keep the government open, setting up an end-of-the-month partisan standoff with Republicans on the eve of a key deadline to keep federal agencies operating. What's still unknown: What will happen next...
PRESIDENTIAL ELECTION・2 DAYS AGO
POLITICO

So far, top Republicans are staying quiet about the Sept. 18 protest on the Hill in defense of some Capitol riot defendants.
U.S. POLITICS・3 DAYS AGO

Senate Democrats have reached a deal on revised voting rights legislation, but a major roadblock remains in the evenly divided chamber with Republicans ready to halt the bill's progress. The package is the latest attempt by Democrats to counteract Republican-led measures at the state level to restrict voting access and...
CONGRESS & COURTS・3 DAYS AGO
Axios

A growing group of Black Democrats — mostly men — is stepping up to try to unseat Republican House members in California, Georgia, Arizona, North Carolina and Illinois. Why it matters: Although independent analysts like the Cook Political Report think the members' districts are friendly GOP territory, a Black political group backing the challengers believes the candidates have a chance because of their local ties and the districts' changing demographics.
ELECTIONS・4 DAYS AGO
Sacramento Bee

Why won’t Democrats respond to Cawthorn and the GOP?

Rep. Madison Cawthorn – North Carolina’s most recent and visible national humiliation – famously told a Macon County gathering last month “we all know” Donald Trump and, apparently, Dan Forrest’s elections also were stolen. If our “election systems continue to be rigged,” he continued, “it’s going to lead to one place and that’s bloodshed.” Noting his alleged humanity, Cawthorn concluded — “as much as I’m willing to defend our liberty at all costs, there’s nothing I would dread more than having to pick up arms against a fellow American.” He has “plans” to call folks to Washington again he “can’t make public right now.” Cawthorn was sanctioned neither by his caucus nor his party. He’s proud, and they’re apparently proud of him.
CONGRESS & COURTS・8 DAYS AGO
WNCY

WASHINGTON (Reuters) – A congressional committee investigating the deadly Jan. 6 assault on the U.S. Capitol received thousands of documents before Thursday’s deadline for U.S. companies and government agencies to submit them, a committee spokesperson said. The National Archives, which handles presidential records, has also begun a pre-release review of...
CONGRESS & COURTS・8 DAYS AGO