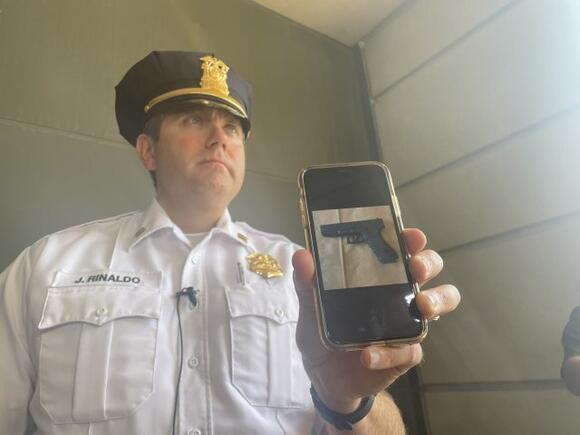 A 14-year-old boy has been charged in connection to a gun scare that led to a lockdown at the Charles R. Drew Science Magnet School on Thursday.

After the lockdown was lifted Buffalo Police Captain Jeff Rinaldo provided an update to the media. Parents were waiting outside for hours and tell us they got no information from the school district or police.

Renita Shadwick is a grandmother to an eighth grader who was stuck inside during the lockdown.

"If anyone would have spoken to us and told us this is what is happening, this is what we are doing, right now your children are safe," Shadwick said. "It would have helped us to calm ourselves."

Shadwick said her granddaughter called her before she was not allowed to use her phone.

“She said ‘nana the school is in lockdown and it’s not a drill, and I’m afraid," Shadwick said.

Rinaldo said a student reported to their parent that they saw an individual in the school bathroom with what appeared to be handgun. The parent contacted the school, the school contacted police and immediately went on lockdown.

Police and K9 units responded and a room-by-room search began to determine if there was handgun or any other type of weapon in the school. Rinaldo said a BB gun that appeared to be a replica of a Glock handgun was recovered from a classroom. There were nine students in the room and they are all being interviewed by police.

"I can tell you, I've been in law enforcement for 25 years, there is absolutely no difference between this gun and the gun that's on my hip," Rinaldo said. "This gun is labeled a Glock made in Austria and there is absolutely not any difference, there would be no way for even a trained law enforcement expert to tell that that's not a real handgun."

According to Rinaldo the gun was found behind a file cabinet, he believes whoever had the gun put it there so they were not caught with it.

Rinaldo commended the student who reported the gun and the school for their actions in the incident. He said he knows the parents were concerned and the search took some time, but the program and policies worked to keep everyone safe.

According to Rinaldo he does not believe students go through security screening at the school, but once the school went on lockdown and students were brought out of the classrooms there were handheld metal detectors used.

The school is connected to the Buffalo Museum of Science. Officials from the museum say guests and day campers inside were free to move around but no one was allowed in or out of the building for a period of time.

On Friday, Buffalo police announced that a 14-year-old student has been charged with unlawful possession of a weapon for a person under 16 years old.

Police said the incident occurred around 2:30 p.m. Sunday and two BB guns were recovered from a vehicle in the parking lot. The person was taken into custody and transported to ECMC for evaluation.
2 DAYS AGO
WKBW 7 News Buffalo

The alleged road rage incident occurred on the I-190 in Grand Island in May. A Grand Island man is facing gun charges in connection to the incident.
GRAND ISLAND, NY・2 DAYS AGO
WKBW 7 News Buffalo

A Town of Tonawanda business owner is not letting a burglary get in the way of doing business. Jeremy Lupke, owner and master goldsmith at Gem Design Jewelers on Delaware Avenue.
TONAWANDA, NY・1 DAY AGO

Niagara Falls police are investigating a crash involving a pedestrian that occurred around 6:30 a.m. Monday on the 7000 block of Niagara Falls Boulevard.
NIAGARA FALLS, NY・2 DAYS AGO
WKBW 7 News Buffalo

He was initially listed in critical condition at ECMC. Around 5:30 p.m. Monday police said the man died from his injuries.
NIAGARA FALLS, NY・2 DAYS AGO
WKBW 7 News Buffalo

A warning from the FBI for you and your family — beware of Sextortion and recently the Town of Hamburg Police Department posted a message on its Facebook page about this issue.
HAMBURG, NY・2 DAYS AGO

“We know the church has to change. It can't stay the way that it's operating now for a number of reasons,” remarked Father Bryan Zielenieski, vicar, Renewal & Development.
BUFFALO, NY・39 MINUTES AGO
WKBW 7 News Buffalo

According to the Amherst Central Fire Alarm Office, the plane crashed into a field south of the Clarence Aerodrome around 12:50 p.m.
4 DAYS AGO
WKBW 7 News Buffalo

A lifelong servant to the Medina community passed away Wednesday. 7 News spoke with Mrs. Cynthia King's colleagues who shared their memories of her impact on the Medina School District.
MEDINA, NY・5 DAYS AGO
WKBW 7 News Buffalo

Millions bracing for Hurricane Ian including many people from Buffalo. WNY family booked the vacation months ago and never imagined it would turn out like this.
BUFFALO, NY・51 MINUTES AGO
WKBW 7 News Buffalo