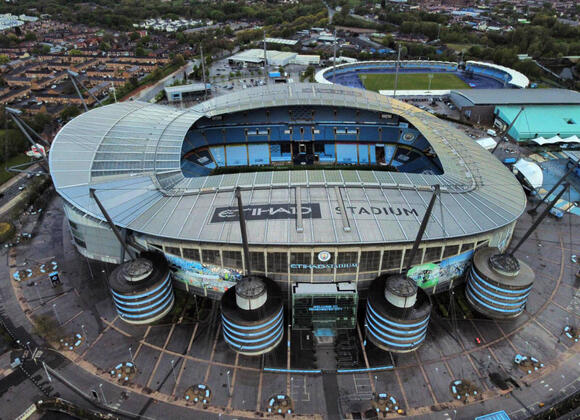 Itakura signed for Manchester City and the City Football Group from Japanese side Kawasaki Frontale in January 2019, and was immediately loaned out to Dutch outfit FC Groningen upon his arrival.

Itakura endured an unconvincing start at the Dutch side before later establishing himself as a key player and subsequently earned a call-up to the Japanese national side - making his debut at the 2019 Copa America as a starter, and played the full 90 minutes as Japan earned a draw against Uruguay.

Having played with FC Groningen since January 2019, Ko Itakura is now headed towards the Etihad Stadium, however the player himself is unsure of where his footballing future lies.

According to an interview with Itakura on FC Groningen’s official website, translated and relayed by Sport Witness, the Japanese defender ‘is yet to be told what the club will be doing with him’ when he returns to the club.

It is currently unknown whether Itakura will remain in Manchester with Pep Guardiola's squad - which remains unlikely at this stage - or if he will be loaned out once more by the club and the parent company.

Celtic have been strongly linked with a move for Itakura, according to reports by the Daily Record, with the publication stating that new boss Ange Postecoglou is ‘well aware’ of the player's capabilities from his time managing in Japan.

A permanent move away from Manchester City is a possibility for Itakura, given the Premier League champions' strength in depth at the back, as well as their desire to raise funds.

The club are continuing to chase the likes of Tottenham star Harry Kane and Aston Villa captain Jack Grealish. However, another loan move as opposed to a permanent deal for Itakura seems more likely.

We're Due to Learn Plenty About Manchester City

Pep Guardiola's side faces Chelsea, PSG and Liverpool in succession, all away from home, in an early stretch that could speak volumes about where the club stands.
PREMIER LEAGUE・1 DAY AGO
chatsports.com

Another Man City man has ‘returned to training’, player ‘in contention’ of facing Leicester

Manchester City received one injury boost ahead of this weekend’s trip to Leicester City with Phil Foden undergoing light training, and they’ve been given another boost following the return of Kevin De Bruyne. BBC Sport say the 30-year-old has ‘returned to training’ and is ‘in contention’ of facing the Foxes...
PREMIER LEAGUE・14 DAYS AGO
chatsports.com

Manchester City aren’t short of midfielders with Kevin De Bruyne, Ilkay Gundogan, Fernandinho, Rodri and Bernardo Silva, but El Nacional say they’re after another – Luka Modric. The Premier League champions have a ‘golden plan’ to bring the 36-year-old back to England as Pep Guardiola is a big admirer. Modric...
PREMIER LEAGUE・14 DAYS AGO
Tribal Football

Manchester City are ready to rival Liverpool for Borussia Dortmund midfielder Jude Bellingham. With Liverpool keen, BILD says the Premier League champions are also taking an interest in Bellingham. While City are also said to be closely monitoring Declan Rice, Bellingham has also apparently been identified as a potential replacement...
PREMIER LEAGUE・11 DAYS AGO

Manchester City’s failure to sign Harry Kane led to Pep Guardiola using Ferran Torres as a makeshift striker while Gabriel Jesus remained a deputy, but Calciomercato say they have their eyes on another transfer target – Dusan Vlahovic. City could ‘try to snatch’ the 21-year-old from Fiorentina as Vlahovic has...
PREMIER LEAGUE・7 DAYS AGO
chatsports.com

'I'm not going to apologise for what I said... Hopefully Mr Parker will be there': Pep Guardiola refuses to back down on jibes at Man City fans - and calls out supporters' club chief who told him 'stick to football'

Pep Guardiola refused to apologise for his comments about Manchester City's support in midweek. The City manager invited the club's fans to turn up in their droves for Saturday's clash with Southampton after recording a 6-3 victory over RB Leipzig in front of 38,062 at the Etihad Stadium. Kevin Parker,...
PREMIER LEAGUE・7 DAYS AGO
fourfourtwo.com

Fiorentina's owner has emphasised his desire to keep Dusan Vlahovic at the club but doesn’t know if he will commit to a new contract. According to Calciomercato, the Serbian international’s current deal is due to expire in the summer of 2023 and he is weighing up his options amid interest from several top European clubs.
PREMIER LEAGUE・7 DAYS AGO
chatsports.com

Raheem Sterling’s had an uncertain future at Manchester City for some time after drawing the ire of Pep Guardiola and losing his starting place in the team. The 26-year-old has featured in every game this season, but he’s only started in two of six matches, scoring one goal. Sterling has...
PREMIER LEAGUE・3 DAYS AGO

Cristiano Ronaldo confides in his mother. Cristiano Ronaldo’s mother has revealed that he assured her he wouldn’t be moving to Manchester City earlier this summer. At one point during the transfer window, it appeared to be certain that Ronaldo would be joining Manchester City but dramatic events on August 27th saw the pendulum swing towards their arch-rivals Manchester United.
SOCCER・2 DAYS AGO
The Independent

Thomas Tuchel has rejected any personal battle with Pep Guardiola despite having the chance for a history-making fourth successive win over the Manchester City boss.Chelsea manager Tuchel can become the first coach to inflict four defeats in a row on City supremo Guardiola, when the sides meet in Premier League action at Stamford Bridge on Saturday.The hosts could create a six-point gap on Premier League champions City with victory this weekend, but Tuchel has been at pains to downplay the impact of the managerial tussle.Before his three wins over Guardiola and City that culminated with the Champions League final, Tuchel...
PREMIER LEAGUE・20 HOURS AGO
The Independent

Chelsea vs Man City prediction: How will Premier League fixture play out today?

Two of the Premier League’s presumed title contenders meet as Chelsea host Manchester City at Stamford Bridge.Thomas Tuchel’s side top the league table after a commanding second-half performance took them past Tottenham Hotspur last weekend to continue a strong start to the season that has seen them drop just two points.Manchester City, meanwhile, were held by Southampton and dropped out of the top four.FOLLOW LIVE: Chelsea vs Man City - team news, build-up and live goal and score updatesNeither side will be keen to cede points to their rivals so early in the new Premier League campaign in a clash...
PREMIER LEAGUE・19 MINUTES AGO
Yardbarker

Scaroni outlines Milan’s plan to have a ‘future like Liverpool, PSG and Man City’

AC Milan president Paolo Scaroni has inferred it could take three or four years until a new stadium is built, and subsequently to compete with Europe’s elite. Scaroni spoke during an interview with RaiRadio1 this morning about the match last night against Lazio, which ensured Pioli’s team continued the season in perfect fashion, but also about the club’s project and vision for the future moving forward.
UEFA・12 DAYS AGO

The Portugal international has gone from strength to strength since making the switch from Benfica to Manchester amid a global pandemic last year. After a relentless run of the games over the course of the previous campaign, the 24-year-old's displays have made him one of the first names on the teamsheet at the Etihad Stadium.
UEFA・8 DAYS AGO
newsbrig.com

Fights happen when player’s don’t do what they are told at half-time, indicates Pep Guardiola

Manchester City boss Pep Guardiola saw his side overcome RB Leipzig in the first game of their Champions League campaign, but he was not entirely pleased with their efforts. Guardiola was caught screaming at Jack Grealish and Riyad Mahrez during City’s 6-3 win over Leipzig on Wednesday. Manchester City manager...
PREMIER LEAGUE・9 DAYS AGO
chatsports.com

Rafael Benitez has revealed what he told his players after Everton’s victory last night against Burnley. The Toffees maintained their unbeaten run to the season after winning 3-1 against Burnley in the Premier League clash at Goodison Park on Monday night. Despite going a goal down, Everton came back strongly...
PREMIER LEAGUE・11 DAYS AGO
The Independent

Everton boss Rafael Benitez stressed the need for the Toffees to improve in defence following their Carabao Cup exit at the hands of Sky Bet Championship side QPR.Tuesday’s third-round tie at the Kiyan Price Foundation Stadium saw Benitez’s men crash out on penalties after a 2-2 draw.Everton, who were beaten 3-0 at Aston Villa in the Premier League last weekend, twice trailed to Charlie Austin headers, with Lucas Digne and Andros Townsend netting equalisers.In the subsequent shoot-out, Jimmy Dunne converted the winning penalty after Tom Davies’ kick had been saved by Seny Dieng as QPR triumphed 8-7.Benitez told evertontv: “The...
PREMIER LEAGUE・2 DAYS AGO
Insider

Cristiano Ronaldo will earn $125 million this season, making him the highest paid soccer player in the world ahead of Lionel Messi

Ronaldo left Juventus to re-join Manchester United this summer, penning a two-year deal that will see him pocket an annual $70 million.
SOCCER・3 DAYS AGO
Insider

Ronnie Brunswijk, a former rebel leader in Suriname, started up-front for Inter Moengotapoe as it lost 6-0 to Olimpia in the CONCACAF League.
SOCCER・2 DAYS AGO
The Independent

Arsenal manager Mikel Arteta says Thomas Partey is ‘so willing to play’ during a fitness update on the midfielder ahead of the north London derby on Sunday.The 28-year-old, who has been shaking off an ankle injury, played just under an hour in the Gunners’ 3-0 Carabao Cup win over AFC Wimbledon on Wednesday and could feature in the club’s Premier League match.Arteta said: “Yes it was [the plan to play him for as long as we did] . He hasn’t played a lot of minutes. The rhythm of matches is nothing like the training session. He’s so willing to play...
PREMIER LEAGUE・2 DAYS AGO
AFP

Manchester United crashed out of the League Cup as West Ham avenged their painful loss to Ole Gunnar Solskjaer's side with a 1-0 win at Old Trafford, while Chelsea and Tottenham survived penalty shoot-outs to reach the fourth round on Wednesday. It was also West Ham's first victory at Old Trafford since 2007, earning them a home tie against holders Manchester City in the last 16.
PREMIER LEAGUE・2 DAYS AGO